John Hanke, the head of Google’s Niantic Labs mobile gaming division, isn’t your traditional game developer. At the Dice Summit in Las Vegas last week, he gave a talk about mobile games — and he seemed a bit out of place. Hanke is stretching the definition of a game with Ingress, a mobile-only experience which encourages players to go to live events (anomalies) where two factions can battle for control of a place in the real world. The title encourages gamers to socialize, exercise, and be more civic-minded by visiting public places.

Ingress, which now has 2 million registered users and formally launched after two years of testing, is blending the virtual world and the real world. The game uses smartphones, tablets, and eventually will work with devices like Google Glass. Ingress players are showing up at live events that are like “social icebreakers” for players, Hanke said.

While Ingress might appeal to the geek with a smartphone, Hanke wants to reach a broader audience. Niantic is also working on Endgame, a title that will be a game, movie, and book in collaboration with author James Frey and book publisher Harper Collins.

We caught up with Hanke at the Dice Summit. Here’s an edited transcript of our interview. 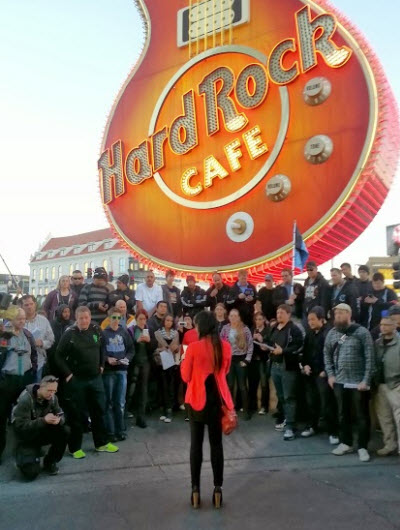 Above: Ingress event in Las Vegas, where the Resistance won.

GamesBeat: Are you getting a feeling across to some of the traditional game developers?

Hanke: I think so. It takes a few times, two or three times, and then it starts getting through. Some of the old-timers in the industry have come up to me and said, “This is amazing. I totally get it. I want to work with you guys.” The people whose professional lives haven’t just been the most recent console era; the people who were back in the 8-bit days. They’ve seen changes. It seems like they get it more readily.

GamesBeat: It’s clearly a strong community there. You see pictures of people getting together at events.

Hanke: People like getting together and meeting other people, exactly. It’s social. It’s the same dynamic that you see driving a lot of social products out there, outside of games.

GamesBeat: What did you have here for the event? How did you organize this one?

Hanke: We had a mini-anomaly. That’s where we have an event and publicize it to the users. It affects which direction the story is going to go. In this case, it was a reveal of some important information. We opened it up, obviously, to Dice people. We had Android phones so that they could try it if they didn’t happen to have an Android. There was a strong local contingent of players. There were people who flew in from Hawaii and Seattle and other places.

GamesBeat: You had a newscaster come in.

Hanke: Susanna Moyer, yeah. Klue, who’s another important character in our world, she was also here interacting with people. Essentially, the event earned the Resistance faction – which won – a clue to the new chapter of the game that’s just starting, called Recursion. That’s our first-quarter 2014 season.

GamesBeat: It takes a lot of planning and preparation for all of these things. Is that where a lot of your energy is going within the team, making these events happen?

Hanke: We have people who put them on. It’s not my primary focus. We have a modest-sized marketing team that’s on the events. They can do other things, other kinds of marketing, but for us, the player events have been a great way to encourage the virality that’s already present in the game. It energizes the player base.

Our primary way of growing the base has been players recruiting other players themselves. We just try to encourage that.

GamesBeat: You had the big 13-city event.

GamesBeat: For 2014, are you doing more of the same, or planning different things?

Hanke: It’s similar. With 13 Magnus, the new twist was … did you see the presentation that we did yesterday? We put these 13 shards out all around the world, and people were trying to move them to San Francisco and Buenos Aires. That worked really well as far as driving planning and coordination and communication between people.

There’s a similar type of game that’s happening in Q1. That’s part of this Recursion theme. It has to do with an artificial intelligence that’s merging with a human and trying to achieve immortality. 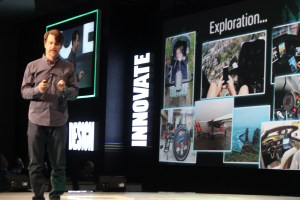 Above: John Hanke of Google Niantic at Dice.

GamesBeat: I think I heard a two-million figure now. Is that double what you had the last time you talked about numbers?

GamesBeat: That seemed pretty quick, the ramp there.

Hanke: We had a really solid fourth quarter. But we also came out of beta. We were invite-only until Q4. We’ve definitely seen a spike. And then, hopefully, we’ll see another spike when we come out on iOS. That’s the next big thing for us.

GamesBeat: You’ll have to catch up with Flappy Bird now.

Hanke: We’re going to be here in a year. I don’t know, maybe they will be too? I hope so. We’ve announced Endgame since the last time you and I talked as well, which is the new IP, the James Frey IP, that will be a book and a movie and a game with us. That’s cool. I think when you and I spoke, I alluded that some Hollywood people are really getting this idea of launching something and building a world across games and books and movies all at the same time.

GamesBeat: The choice, was that more like a mainstreaming of what you’re doing?

Hanke: I would say a broadening. We were excited about it because James shared the same vision we do for world creation. To do that at that scale, with Harper Collins pushing a major book launch and a movie and the game and all that in a coordinated way, was exciting. Because he got it. I think we’re doing it the right way.

We’ve had people talk to us about doing a marketing campaign for a movie: “Hey, we want to do something with you guys to promote the launch of this movie.” This is not that. This is a game and a book and a movie that are all designed as one cohesive experience.