Strike Vector is excellent for a game in its beta stage — except it’s not in beta. It’s a full retail release, and immersion-breaking bugs and a lack of polish bring it down.

I didn’t like writing that. Strike Vector is a multiplayer aerial shooter for Steam. It was developed by an eight-person team, Ragequit. The game is a blast when it’s working well. It’s thrilling, challenging, rewarding, and somewhat innovative. It’s available now, but my experience outside of matches, especially trying to find a match, made me feel like this game was simply not ready for release yet. 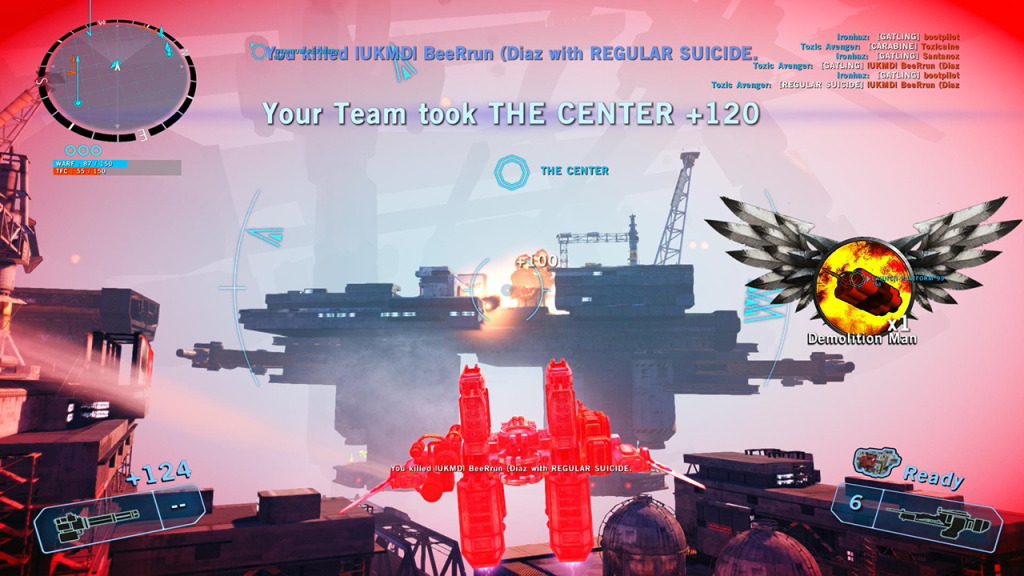 Above: Completing different criteria in Strike Vector matches will earn you medals, like the one you see to the right, which increase your experience gain.

Playing a good match in Strike Vector is every bit as exciting as it should be. Its inspiration comes from classic multiplayer first-person shooters like Quake III arena, and it captures every bit of the old-school twitch-and-blast fun it sets out to. And it actually innovates on it by taking it to the skies. The freshest part of Strike Vector’s gameplay is the capability to switch between the jet-like Vector mode and hovering Harrier mode at any time. This leads to strategic and enjoyable dogfights. If someone’s tailing you, you can flip into Harrier mode as your pursuer whizzes past and then line up the killer shot while they’re caught off guard.

The maps are well designed and create a nice mix of long-range and close-up engagement opportunities. Most of the modes are pretty standard: deathmatch, team deathmatch, and domination. One standout is the bounty hunter. You kill players to steal their cash, and your wanted level goes up as you accumulate more. The game points out the leader, making them easy to find. It’s not groundbreaking, but it suits the pace and style of the game very well. It’s also very competitive. Aside from bounty hunter, domination also suits Strike Vector. Anything that brings a lot of opponents together in a concentrated area leads to the most intense fights. In domination and team deathmatch, teamwork is essential because 2-on-1 fights never go well for the lone wolf. 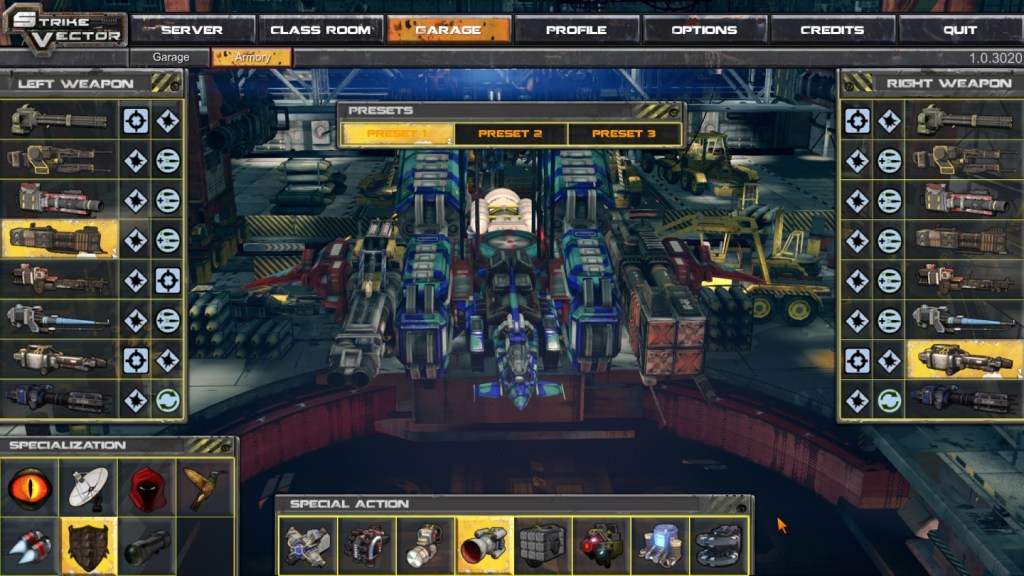 Above: There are A LOT of options to choose from. They can all be changed every time you die.

Something that’s essential to any shooting game is the weapons, and Strike Vector’s don’t disappoint. It gives players a choice of eight weapons for each wing, and you can dual-wield the same one if you want to. They are all well balanced; some are more beginner-friendly but limited in their effectiveness, while others are lethal but are difficult to aim. My favorite combination is the Gatling gun and the shotgun for beginner-friendly midrange and close-range coverage. If that doesn’t sound appealing, don’t worry — this game has plenty of rockets. Players choose two upgrades for each equipped gun, a ship upgrade, and a special action. The number of possible loadouts is great for finding your own playstyle, even if it’s overwhelming at first. On top of all the functional customization options, color schemes and decals make it easy to personalize your Vector.

Strike Vector’s graphics look great. They might be pretty typical for triple A game, but they were made by a team of only two programmers and three artists. Strike Vector is a shining example of how far indie games have come with production value. Here’s a gallery of screenshots so you can see some of the detailed environments yourself.

Ragequit has announced that they plan to release new content for the game that will be free to all players. The first update should arrive Feb. 28. This is refreshing in a time when many publishers try to nickel-and-dime customers for downloadable content.

The small scale of Strike Vector’s team is impressive, but combined with only 16 months to make the game, it prevented them from finishing such an ambitious project on time. For some reason, Ragequit decided to release it anyway, even if it wasn’t ready. The in-game graphics are great, but the interface outside of matches looks like it’s held together by glue. The first thing I ever did was go to the “Classroom” to learn how to play, and I was immediately hit by a salvo of typos and grammar issues.

Above: I’m ready to earn the more money as I possibly can!

Image Credit: I'm ready to earn the more money as I possible can!

Now, this game was made by a non-English development team, and I get that. I’m no grammar expert in French. But when you’re releasing a video game to the public and selling it for $25, you should at least have someone proofread the localization text. It just looks unprofessional.

Another way the game is rushed is its glitches. I spent my first two hours flying painfully slowly and wondering why the “accelerate” key didn’t work. Finally, a player on text chat complained about the same situation, and another friendly competitor told him to reset his key bindings to default. I did the same, and suddenly I could actually fly at a decent speed! I never once changed my key bindings before that, so it was a bug.

I experienced another glitch at least twice: entering a server only to find myself staring at an infinitely looping “Defeat” screen.

Difficulty getting into matches

In a multiplayer-only game, this is a deal-breaker. So far, the community for this game is sparse. Many times, fewer than 100 players are on all of its international servers. That’s fine; I’ll just play on that European server that’s almost full. But wait — the game often doesn’t log you in to the server you choose! For some reason, I kept selecting one server then ending up in a different, empty one. To leave a server, you must press the “Ragequit” button, and I was definitely feeling the rage each time this happened. It was a frustrating waste of time, and it totally ruined the game’s excitement. All I wanted was to be whisked from one chaotic match to another, never slowing down. Instead, I spent 15 minutes trying to find a match one night and 10 minutes the next morning before I gave up both times.

If you’re not OK with dying — a lot — then I can’t recommend this game to you. During the first few matches, walls were my worst enemy as I learned how to fly. Strike Vector punishes running into them by taking away a kill and points on the scoreboard. Even once you can avoid stationary objects, learning how to successfully engage opponents takes a lot of practice. Evading the wide variety of weapons being fired at you and actually hitting enemies with your own does not come easily. You’ll get the hang of it eventually, but mastering it is another story. Strike Vector’s lack of team balancing worsens the situation, causing many matches to be routs instead of exciting competitions.

I had a lot of fun playing Strike Vector. It’s a good game held back by frustrating glitches and a lack of polish. Ragequit developed it in only 16 months, and it released less than a month after going into beta. The developer’s accomplishment in six months is impressive, but after so much hard work, it didn’t take the time to finish the job. The result is a game that looks and acts like it’s still in beta or perhaps a Steam Early Access title. Hopefully, Ragequit can fix its bugs and expand its player base before it fizzles out, because at its best, Strike Vector is something every fan of chaotic shooters should experience.

Strike Vector released for Steam on Jan. 28. The publisher provided GamesBeat with a copy for review purposes.