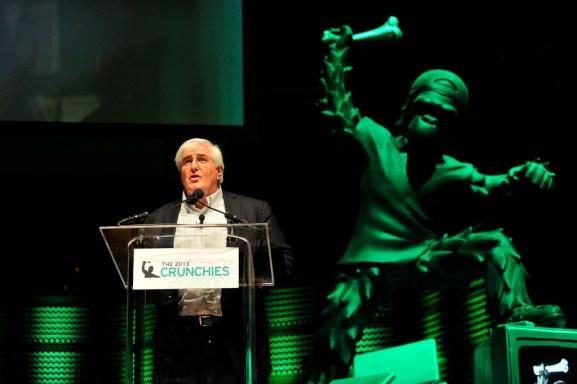 It just wouldn’t be an award show without drama.  The Crunchies Awards attracted the attention of anti-tech protestors this year, who staged a demonstration outside Davies Symphony Hall as the movers-and-shakers in the tech industry descended for the annual event.

“The tech industry is gathering for its big Oscars style gala, the Crunchies awards. Join us to protest the worst in tech with our own ceremony, the Crappies awards,” the protest Facebook page said.

This is the latest in a number of protests against the tech industry for gentrifying San Francisco, hiking up prices and driving out long-time residents.

Crunchies host John Oliver teased the crowd about how we have managed to gentrify a city that has already been gentrified three times over.

“You not only manage to piss people off with how you work, but how you get to work. I didn’t even think that was possible,” he said.

In light of this controversy, famed angel investor Ron Conway called on the tech community to get more involved in improving San Francisco. He announced that his non-profit SF City is creating a 1-1-1 program that encourages startups to volunteer their time and resources.

“Let’s focus on the need for us to get more involved by volunteering in the community,” Conway said. “We have faced challenges before, let’s prove we are all in this together.”

In the mean time, here are the winners of this year’s Crunchies Awards:

Ah bitcoin, how you captivated us this year with your soaring highs and your plunging lows. We watched breathlessly as early bitcoin owners became millionaires and the authorities seized millions of dollars worth of bitcoins from the the Web’s notorious black market, the Silk Road. You certainly kept us on our toes.

Airbnb wins this category for the second time in two years. Way to go Airbnb, without you we would never be able to experience what it’s really like to live in another place, snoop through stranger’s closets, or pay our exorbitant rent.

Teenagers go hog wild for this social commerce app. That is all you need to know.

We just can’t seem to get enough of this ephemeral photo app, which is allegedly valued at north of $3 billion. Snapchat managed to win this award despite losing 4.6 million usernames and phone numbers to hackers last month. But what does that matter when you can send someone a fleeting image of yourself making a kissie face?

Without Upworthy, it would be infinitely harder to stay on top of the latest in feminist, marijuana, and “oh my God” news. This startup, known for making content go viral attracts more than 30 million unique visitors a month. And Crunchies.

One Medical’s mission is to bring high-quality health care to all Americans. You can book a same-day appointment online and get seen by a doctor without a wait. Turn out going to the doctor doesn’t have a suck and One Medical is quickly opening up offices are the country, as well as becoming a hot startup perk.

FiftyThree builds tools to unleash your creativity on mobile devices. Pencil is its latest product, a stylus that people can use to draw, design, erase, and blend. FiftyThree’s other well-known product Paper is an iPad creation app that won Apple’s iPad app of the year in 2012.

Oh, and they are hiring.

Community image-sharing website Imgur attracts over a whopping 100 million unique visitors a month. It is one of the top 30 most trafficked sites in the U.S.. People are creating more than 100,000 memes on Imgur per month. With traction like this, who needs VCs? More lolcats please.

Zendesk is rumored to IPO this year, what could be more sexy? The provider of cloud customer service now has more than 40,000 customers in 140 countries who use its technology to keep their customers happy.

Israeli-startup Waze set off an acquisition bidding war and ultimately sold to Google for a rumored $1.3 billion. The social driving app helps people “outsmart traffic together,” so you never got stuck in a gridlock or caught by a cop with a radar again.

Duolingo, founded in 2011, is the brainchild of Carnegie Mellon PhD student Luis Von Ahn. Von Ahn is the creator of reCAPTCHA and ESP Game — both were acquired by Google. The initial idea for Duolingo was to convince millions of people to translate web content into different languages for free. The startup isn’t far from achieving its ambitious goal.

The Oculus Rift is a virtual reality headset that makes you feel like you’re inside a game world.  It provides an immersive, stereoscopic 3D experience with a huge field of view—110 degrees diagonally. It aims to make virtual reality something any consumer can enjoy.

Candy Crush Saga has dominated the mobile charts and our finger touches during the past year as the world’s most popular mobile game. It is so addictive parents forget to pick up their kids from school. Candy Crush Saga now has more than 500 million downloads and the title has been played more than 150 billion times.

Edward Snowden was much more than a tech industry story this year. His revelations about the NSA surveillance had vast global repercussions and raised serious questions about the balance between privacy and security in this Internet age. Alas, Snowden was not present at the Crunchies to receive his award.

Angel of the Year: Chris Sacca

Chris Sacca is a former Google employee who became such an active angel investor, he created a holding company called Lowercase Capital to manage his portfolio. He was one of the first investors at Twitter and has one this Crunchie award before.

VC of the Year: Peter Fenton

Peter Fenton is a general partner at Benchmark who ranks fifth on the Forbes Midas List. Fenton serves on the board of Twitter and was an early investor in Yelp. He is also on the board of Docker, New Relic, Optimizely, Polyvore, Horton Works, and Zendesk.

Drew Houston and Arash Ferdowsi are the cofounders of Dropbox, a cloud storage company which is now valued at an astonishing $10 billion. The company is fueling rumors of a 2014 IPO. It has more than 200 million users and people save 1 billion files to Dropbox every day.

CEO of the Year: Dick Costolo

Ninety-six percent of Twitter employees are happy with CEO Dick Costolo, according jobs site Glassdoor. Costolo is a former comedian who has written and spoken extensively on leadership, and guided Twitter through an IPO this year.

Tinder hit the online dating world by storm by dispensing with all the “what is your greatest feature” and “what are your dreams” nonsense, and cutting straight to the chase — do you think this person is hot or not? The mobile, photo-centric app is beloved by hordes of millennials.

2013 was the year that many of Kickstarter’s most famous and adventurous projects became realities. Pebble, Oculus Rift, and Ouya all hit the mainstream. Kickstarter campaigns raised an average of $1.3 million a day in 2013, which translates to $913 every minute. 3 million people pledged $480 million to Kickstarter projects last year, with 19,911 projects successfully funded.

And the nominees were…

Who were the winners going up against? Here are the nominees in each category.

Angel of the Year

VC of the Year

Founder of the Year

CEO of the Year