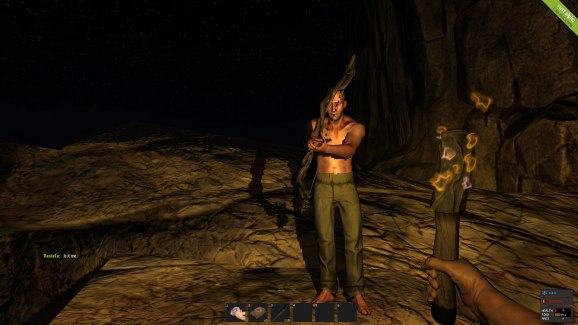 Survival game Rust from Facepunch Studios is a surprise hit on Steam.

An indie game about surviving the apocalypse with nothing but a rock has sold more than a million copies before its developer even finished making it.

Rust creator and Facepunch Studios boss Garry Newman revealed that his company has sold more than 1 million copies of the online survival title. The game is available now on Steam’s Early Access channel for $20, and this success comes despite the fact Rust is still in an early testing phase.

Rust has players joining online servers populated by other players, who must struggle to find materials and weapons in an effort to survive. As players gather resources like wood and stones, they can craft things like tools and shelter to improve their chances of survival. When players die, they lose everything and must start over.

Facepunch is still developing Rust but decided to launch it on Steam’s Early Access portal. This is the service on Valve‘s online store that enables studios to release games before they’re finished. Currently, many of the most popular games on Steam are available through Early Access. In fact, Rust is the third best-selling product on all of Steam right now. Rust debuted on Steam on Dec. 11.

Rust has a lot in common with DayZ and Minecraft. All three feature survival elements and launched at a reduced price while still in development. DayZ is an online survival shooter that features scavenging. Minecraft is a block-building game that has players focusing on building and crafting. Rust has found success with a formula that combines survival and crafting into one experience.

In terms of success, Rust is also following in the footsteps of DayZ and Minecraft. While Rust has just crossed 1 million, which is very impressive for an independent studio, DayZ (which is also still unfinished) did the same only four weeks after its December 17 release. Minecraft, which first debuted in a prerelease state in 2009, has gone on to reach more than 35 million in sales.

Newman, who previously released Garry’s Mod, plans to continue development of Rust through 2014. At some point in the future, the game will move from its current alpha testing stage to a beta test, which is closer to a final version. Facepunch will likely raise the price of the game at that point.