More than 60 percent of Android devices are currently running version 4.1 of the operating system or later, and Everyplay now has the capability to reach those users with in-game recording.

Everyplay is a mobile-technology company that has long provided developers with a simple tool that adds gameplay recording and video sharing to iOS apps. Now, it is bringing that technology to Android — and not just to the latest version of Android. Instead, Everyplay says its software kit will work on Android 4.1 and later. Competing developer tools require at least Android 4.3, which cuts down on the potential audience. 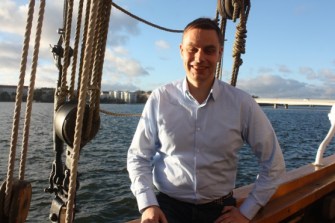 Above: Everyplay chief executive Jussi Laakkonen is on a boat!

“The common wisdom was that replay sharing would be impossible on Android 4.1, but we made it work,” Everyplay chief executive Jussi Laakkonen told GamesBeat. “Everyplay for Android 4.1 and up supports even the most CPU & GPU intensive games like Dead Trigger 2.”

Android 4.1 Jelly Bean is the most-used version of Google’s mobile operating system. By working with 4.1 and later, Everyplay can reach 61 percent of the global Android market. That’s compared to Kamcord, which requires at least Android 4.3 and can only reach around 11 percent, according to Google.

“Our unique technology is the key deciding factor on why some of the world’s largest companies in mobile games choose Everyplay both on iOS and Android,” said Laakkonen.

As for specific Android games getting Everyplay support, Everyplay and developer Madfinger Games would only confirm that Dead Trigger 2 is getting the feature on Android “very soon.”

Everyplay is battling it out with Kamcord. Both companies are trying to establish a foothold on Android and iOS. While Everyplay will certainly win points with developers for supporting Android 4.1, Kamcord recently announced integrated Unreal Engine support, which makes it easy for developers using those tools to add Kamcord recording.