Turtle Rock Studios and 2K Games have taken the wraps off Evolve, the cooperative multiplayer, monster-hunting first-person shooter coming this fall to PlayStation 4, Xbox One, and PC. In a hands-on preview, I found it to be both terrifying and a lot of fun.

Evolve is the latest title from developer Turtle Rock Studios, started by Phil Robb and Chris Ashton in 2002. They did a lot of work with Valve, creating Counter-Strike: Condition Zero, Counter-Strike: Source, and Left 4 Dead. The latter game was about four human players who teamed up together to fend off hordes of fast-running zombies. Robb said that game taught the developers a lot about cooperative multiplayer, including boss battles. Such battles are usually scripted and repetitive since they’re based on computer-controlled bosses. (See our full interview with Robb here).

The great insight that the developers had is that boss fights are a ton of fun, but the best boss isn’t an artificial intelligence player. It’s a real person. So in this game, four human-controlled hunters form a squad and square off against a human-controlled monster, dubbed Goliath. The hunters are well armed with cool technology for tracking and trapping the monster. But the Goliath has enormous physical strength and can charge unexpectedly.

On an alien world with lush jungles and wildlife, the two sides play a cat-and-mouse game. The 3D graphics are outstanding. As the monster, you can hunt and eat wildlife so that you get the energy to evolve into a more powerful creature. After you do that, you can take the offensive against the humans.

“Until now, we never really had the hardware to fully realize the vision,” Robb told GamesBeat. “If you’re the monster, you have to be able to hide, and that means you have a lot of foliage. There’s also a lot of wildlife that you have to model. It was OK on the previous generation, but we decided the game presents itself much better on next-generation consoles.”

Turtle Rock started on Evolve three years ago, and THQ was planning to publish it. But then that company went bankrupt, and Take-Two Interactive bought the rights to publish the game for $10.8 million a year ago. Here’s a rundown on what it’s like to play on both sides of this game. 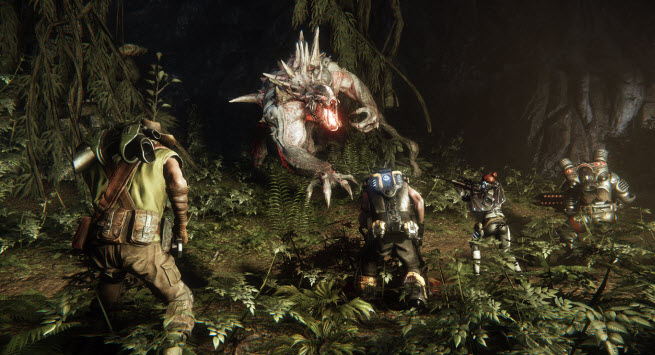 I started out playing as Goliath, a tremendously strong creature who is a cross between King Kong and a monster from the Alien movies. Goliath can leap long distances and come stomping down on targets. It can also charge at an enemy and send it flying.

As strong as it is, the Goliath can’t kill a human with a single blow. At stage three, the monster can do a lot more damage. Even so, the humans can take a lot of abuse. That makes the game more balanced. But once one of the survivors goes down, the monster’s chances are much better.

At the beginning of a round, the monster gets a 30-second head start at hiding while the squad of humans drops into the large battle arena. The area is so big that there are many places for the monster to hide. You can move around fast, but there’s a chance you’ll scare birds. If you do so, the hunters get an immediate jump on your location. The monster can also move around in stealth mode as if it were stalking something. The trackers can see the monster’s footprints, but the monster can walk through streams to hide tracks.

As I started moving, I couldn’t shake a feeling of fear as I was being stalked even though I was a very powerful creature. That sense of dread is something you don’t feel in a lot of video games, and it’s even worse because you know that those chasing after you are smart.

I moved away from the drop zone as quietly as possible, but the humans saw me relatively quickly and started shooting. I had to jump and run to try to lose them. Then a trapper set up a kind of shield that ensnared me inside a section of the terrain. So I had to turn and fight. I charged the humans, but they were able to fly around with jet packs and escape me. One of the trackers harpooned me, and I had to pull the weapon out and stay on the run. I pummeled the members of the squad but never scored enough hits to kill one. Then the shield expired, and I was able to run off. I was able to escape because the monster can climb up any surface, like a cliff, quickly.

Then I just started running around the rock in circles and was able to get away from anyone who had a bead on me, and I would occasionally knock into a hunter from behind. This was enormously satisfying as the hunter went flying at a single swat or charge. But I didn’t get any of them for good and ran off again. I found it a bit hard to make precise attacks with the monster.

I was able to eat enough animals to heal and then level up to stage three. At that point, I was able to take the offensive since I was now about 30 feet tall. I went to a multilevel building that had a bunch of targets that I had to destroy. I hopped around and was able to ascend the building without being spotted. Then, on top of the platform, we had a big melee.

I had to chase after the medic most of the time because she was healing the other hunters that I attacked. If I took her out, I would be able to eliminate the other players more easily. I eventually learned how to aim rocks that I could fire like missiles at the humans. I also could jump up and come smashing down on the ground, knocking the humans off their feet if they were too close. I was able to deal a lot of damage. But the medic was fast and could jump around with her jet pack. So she kept escaping. Eventually, the hunters brought me down. When they did so, I found that my hands were sweating. It was pretty intense.