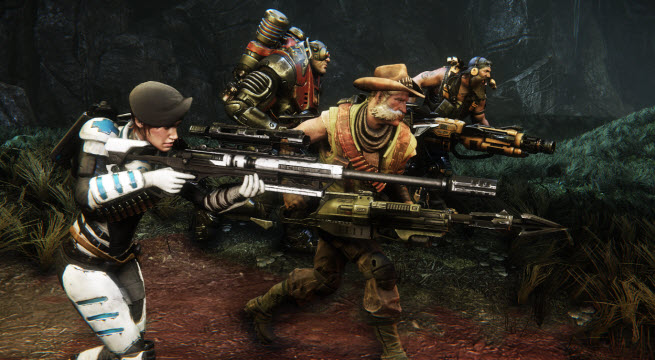 Above: A human squad in Evolve

Playing as a human

After my turn as a monster, I had a much better idea of how to play a human. I started out as Griffin, the trapper. Griffin has a light submachine gun that can do a little bit of damage to the monster. But his value comes in other ways. I was able to plant a bunch of sound sensors into the ground. If the monster walked by them, they would sound an alarm, and my team could descend on the location. I had seven sensors, or enough to cover a line down the middle of the map. At one point, the monster crossed over a sensor, and we spotted him.

We were able to communicate with each other on headsets. We ran to the spot, and I deployed a big shield, which trapped the monster. And then I started opening up on him with my submachine gun. The others opened up on him with harpoons, assault guns, and artillery barrages. One of the humans can shield you from attacks and protect you as you fire at the monster at close range. Eventually, the monster ran away again.

The monster survived until stage three, and we had to defend the platform. That was pretty hard to do, and the monster kept knocking us out by charging us. After I died, I had to sit out for two minutes while my comrades tried to stay out of the monster’s way. I respawned in the midst of the action and got taken out again. The monster survived long enough to win that round.

The next time, I played a support character. This class gives the other players some tactical advantages in offense and defense. In this role, I was able to call in an occasional artillery strike that tore up the monster. I could also harpoon the monster and keep it pinned down in an area while the others shot it.

My fellow squad members made themselves very useful. The medic had a special gun that could punch a hole in the monster’s armor. It shows up as a target on the monster’s body, and other players can shoot at it, doing more damage than ordinary. She could also point a ray at a comrade and heal the player on the spot. The trapper did his job. And the assault gunner stayed busy and never appeared to run out of ammo.

We found that there are other dangers besides the monster. There are plants like Venus flytraps. If you get tangled in them, your teammates will have to come and shoot you loose. The wildlife can attack you if you startle it. The fight went all the way up to stage three again. And the monster was victorious. Clearly, if you don’t pull together a coordinated assault on the monster, you fall, one by one. 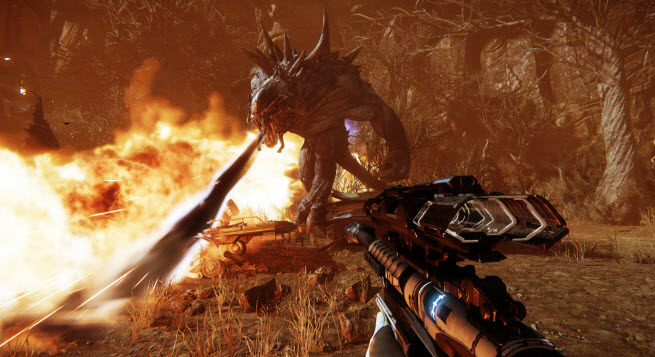 Above: Sniper shoots at a monster in flames in Evolve

I was a little disappointed there wasn’t a single-player campaign to give me a greater sense of the universe. But there are tutorials that will get a new player off the ground and running. And I expect to see a lot of variety in the gameplay, maps, and other features. There will be different game modes beyond Hunt, and there will be different kinds of monsters. But Turtle Rock won’t be talking about those until later. Like Left 4 Dead, this game could prove to be enormously versatile over time. Ashton said Evolve has been designed to be infinitely replayable. I think he’s got a point.

The game design is wonderful. The inclusion of the wildlife and the birds makes the game world come alive, and it introduces a lot of surprises to the gameplay. You can test your skills as a teammate or a lone wolf. Either way, I think this game is going to look great on next-generation hardware and will provide a ton of multiplayer fun when it finally comes out.

Check out our screenshot gallery below.