One of the biggest next-generation video games in development is Evolve, a cooperative first-person shooter coming this fall from publisher 2K Games and Left 4 Dead developer Turtle Rock Studios. 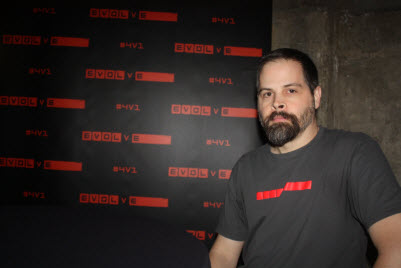 The game is a multiplayer-only title where four human hunters search across large 3D landscape for a big monster. It’s like a boss fight in a sci-fi game, only one where the boss, or the monster, is controlled by another human player. I’ve previewed the game, and it takes a lot of skill on both sides. It’s nerve-racking for everyone as each side has its advantages. The human players can track and trap the monster, but the big brute can hide in the alien jungle and toss the humans around like rag dolls.

We caught up recently with Phil Robb, the co-founder of Turtle Rock Studios, at a press event. Evolve will launch on the Xbox One, PlayStation 4, and the Windows PC.

Here’s an edited transcript of our conversation. And here’s our full preview of the game.

GamesBeat: How long have you been working on this so far? It seems like you’ve been preparing it for a long time.

Phil Robb: About three years. Three years of not being able to talk about what you’re working on, it drives you a little crazy. [Laughs]

GamesBeat: Was Evolve always developed with next-gen hardware in mind?

Robb: No, not initially. We were looking at doing it on current hardware. This was before the next-gen stuff was even announced.

GamesBeat: So more with high-end PCs in mind.

Robb: Yeah. But once they announced the new stuff and we saw what it was capable of, we said, “OK, the new consoles are going to be able to do much better at what we want.” 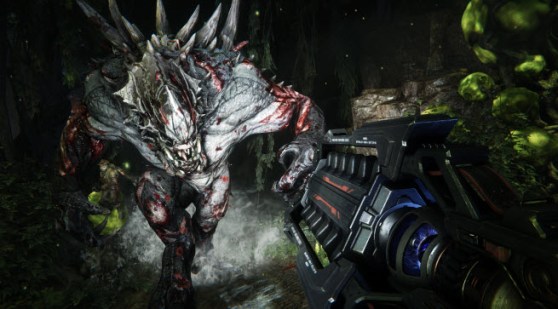 Above: A Goliath vs a gun in Evolve

GamesBeat: It’s very multiplayer-focused. Is there any single-player content at all?

Robb: We have aspects of the game that are specifically going to give people who don’t necessarily want to go online a good experience. It’s somewhere between a tutorial and a campaign. You can go in and meet the hunters and it runs you through a light narrative.

The other thing we have is very similar to Left 4 Dead, where you can set up the game with any configuration of A.I. and human players you want. If you don’t want to go online and play competitively, but you and three friends want to play against the A.I., you can do that. Or say you just unlocked a new monster and you want to try it out before you take it online. You can play that against four A.I. hunters, or any sort of combination in between.

GamesBeat: It’s almost like Left 4 Dead with one big boss to fight against instead of a bunch of zombies. Did you get this idea when you were working on that project?

Robb: Certainly there’s Left 4 Dead DNA in here, yeah. The original idea actually predates Left 4 Dead, though. It predates Turtle Rock entirely. This is something that Chris, my partner, and myself and a few guys have been talking about for a long time. We just never had the hardware to be able to realize the vision.

GamesBeat: What part of it takes all that hardware power?

Robb: In order for the monster to be able to do its thing, it needs to be able to hide. We wanted to have these lush alien environments, full of foliage and stuff like that. Right there, you’ve got a lot of — it’s just pushing a lot of polygons and a lot of objects around. On top of that, besides the monster and the four players, you have a lot of A.I. happening around all the wildlife. That’s expensive as well. In general, it looks like it looks. [Laughs]

We worked on this a long time. It’s one of those things where — once we got it working on the previous generation of hardware, we said, “Well, this looks OK, but it’s going to present itself much better on the next generation.”

GamesBeat: It seems like you can only make a boss so smart. The A.I. is always going to be not quite as good as a human being.

Robb: Fair enough, for sure. We’re certainly doing our best. We felt like we did a pretty good job on Left 4 Dead. We’re trying to push it with this one, to make sure that if you want that experience, it’ll be just as gratifying.

Let’s be honest. This is a multiplayer game. Multiplayer is in its genes. Any multiplayer game is always going to be best when it’s played the way it was envisioned. But we certainly understand that not everyone has that comfort level going online into that competitive environment. We want to make sure that the people with those kinds of tastes who buy the game get their money’s worth.

GamesBeat: The asymmetric quality of it is interesting, too. You expect things to usually be balanced for an even number of players these days.

Robb: Exactly. That’s one of the new things we wanted to try. We’d never seen it done on this level, or done as well as we’re pulling off. That’s what gives it a unique flavor. 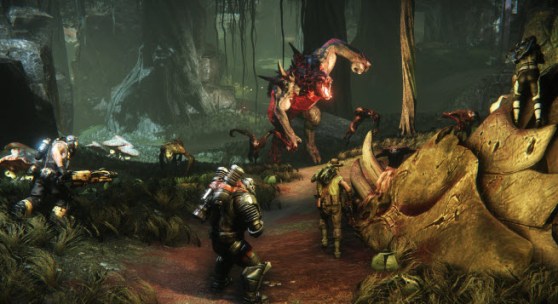 Above: Monster prepares to charge in Evolve

GamesBeat: You get a lot of variety with all these things, like weapons and types of monsters.

GamesBeat: The medic was pretty annoying for me there. I was trying to kill the medic the whole time.

Robb: For sure. That’s a completely valid strategy. A lot of people use that. It’s particularly valid because she’s really good at keeping people up. The other thing is that she’s very visible. You can see that green beam – oh, there she is! That’s a valid approach.

But a lot of the time it’s going to depend on who’s playing. There are some really good Griffin players out there that are excellent with the harpoon gun. They can get irritating. A lot of people will go after him first because he limits your movement. Once you take care of that, you’re free to move and go after whoever you feel like is the next biggest threat.

We didn’t ever want this to be formulaic – like, “The way to win is to kill the medic first, always.” We want all the players to have to look at the battlefield and see what’s going on. “That guy’s doing really well, I’m going after him.” It’s not always the same.

GamesBeat: The monster in this level couldn’t really kill with one swipe. Is that always the case, that the monster has to get a few shots in?

Robb: When you get to stage three, you’re able to do a lot more damage. But ultimately, just for balance purposes, it wouldn’t be much fun for the hunters if they got one-shotted all the time. If you can get a critical hit, it can take them down a lot. A lot of the time, what monster players do is they focus on one guy and get him down. Once you’ve got a guy down, it’s like in Left 4 Dead. If one of the survivors goes down, the chances of getting to the end get much lower. The team is a balanced chair. Knock one of the legs out, and it starts to go over.