Lightning’s back, and she’s packing a mean closet.

Lightning Returns: Final Fantasy XIII is the third and final installment in Square Enix’s Final Fantasy XIII trilogy (due out today in North America on Xbox 360 and PlayStation 3, which I reviewed) and gives the warrior her biggest spotlight yet. The pink-haired Lightning has returned from her self-imposed crystal sleep at the end of Final Fantasy XIII-2 and is now the savior of the doomed world of Nova Crystallis. It’s a story that has gone from ridiculous to just plain impenetrable, but the armor-based battle system proves to be strong enough to counter most of Lightning Returns’ woes.

Unlike all other Final Fantasy games, Lighting Returns features a solo hero, not a party of adventurers. But this doesn’t restrict her to one set of tactics. The class system in Lightning Returns has tweaked the XIII series’ Paradigm Shift to now rely entirely on its collectible armor sets called Schemata, customizable outfits in which each have their own statistical strengths. The Mist Wizard Schemata grants bonuses to magical offense, and the Sacred Knight schemata boosts a mastery of guarding maneuvers. Similar to how each character in prior titles in the trilogy could switch between healer, tank, or offensive roles on the fly, Lightning can perform an instant wardrobe change when you require a different tactic. 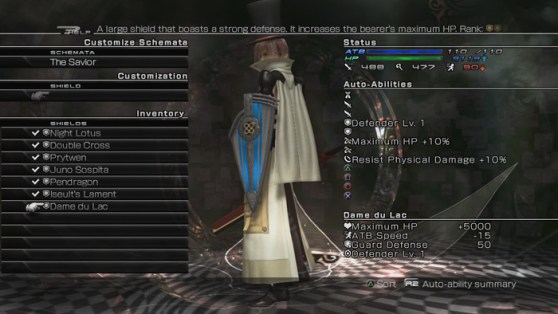 Above: Professor Layton ’bout to kick some ass.

You can purchase or find dozens of these Schemata and equip with any combination of swords, shields, accessories, and abilities. Lightning can then switch between any three of these armor sets at any time during battle. Maximizing the efficiency of your go-to schemata requires a lot of menu surfing, but it rarely feels like a grind. That’s largely due to how open the system is to player control and preference.

Aside from a few ingrained stat bonuses, you can attach any ability or weapon to any Schemata with varying effectiveness. Finding a new Schemata with a boost toward your favorite spell and balancing it with an HP-buffing shield gives you a feeling of ownership. A ton of cosmetic objects, while providing no effect on battle readiness, draw you deeper into the process of accessorizing than you would imagine. It’s a shallow but undeniable joy to have your poison-resistant Warrior Schemata dishing out pain from behind a giant pumpkin head.

Unlike the oft-criticized Paradigm battle systems of the prior two Final Fantasy XIII installments, Lightning Returns boasts more immediate and strategic combat. You still must find and exploit the elemental and/or status ailment weakness of your enemies, but a well-balanced timing system gives combat an impressively sharp, strategic edge. Each command takes up a portion of a Schemata’s Active Time Battle gauge, stronger actions taking more than basic maneuvers. Once depleted, the ATB gauge must recharge — at least partially — before you can execute another command. Each Schemata has its own ATB gauge, making flitting between the three setups absolutely crucial if you don’t want to leave Lightning open to receiving full damage. 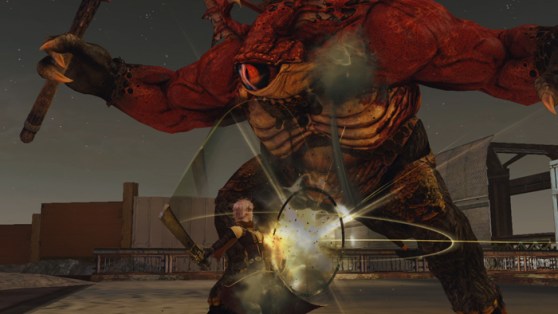 Above: Crotch shots are always a good Stagger technique.

Like in Final Fantasy XIII and XIII-2, landing successive blows on an enemy builds up a Stagger gauge that will knock an opponent off-balance and greatly diminish its defenses. Once active, the gauge will constantly deplete unless maintained through consistent damage. Attacking with the right commands — or guarding at the exact moment of an enemy’s attack — is the only way to maximizing a Stagger. This frequently requires stacking the best attacks from all three of your active Schemata, frantically swapping between them while blocking against your enemy’s onslaught and making time for the occasional heal. It’s tough, and your survival begins to rely on the exploitation of these Stagger gauges fairly early on.

Lightning Returns is by no means a forgiving game. Square Enix has been recommending the Easy difficulty, and I am inclined to agree for players not wanting to spend hours tailoring Schemata to each boss encounter. A definite satisfaction can be had in defeating some of the more tenacious foes on the standard difficulty, especially when your manage to time a move perfectly for that Stagger gauge-busting moment. The combat here is tough but always balanced toward the player, and it maintains a gratifying challenge throughout the average 40-hour run.

I wasn’t exaggerating when I called Lightning Nova Crystallis’ savior. The lithe warrior maiden returns to the world 500 years in the future thanks to the god of light, Bhunivelze (a being who’s simply referred to as “God” in the dialogue fairly often). Time stopped due to events earlier in the series, making the citizens of the world effectively immortal — only accidents, disease, or murder would kill them. Children remain in their prepubescent bodies, and even the strongest bonds have begun to strain after the long centuries. 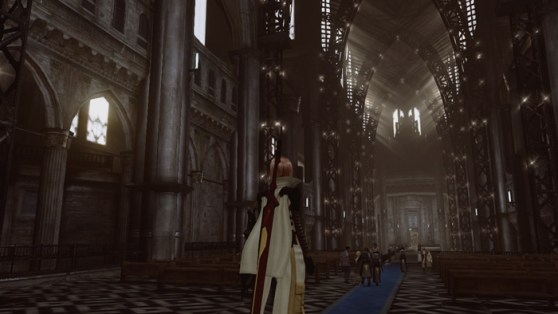 This global stagnation is expertly brought to life through the art direction. Densely packed marketplaces overflow with the clutter that results from centuries of neglect, and idle NPC chatter comes in a wide variety of comfortably numb sentiment. This world is doomed, and its people all know it. The mood picks up during action-heavy scenes, but for the most part this is a somber adventure.

Lightning has 13 days to save as many souls as possible through her quests, storing them as something known as Eradia energy to be reborn in God’s new world. You begin with less than a week on the clock, and you must collect enough of this Eradia to extend the world’s remaining time up to 13 days. As savior, Lightning has the ability to freeze time temporarily, but you will still need to manage each day wisely to maximize the amount of quests you complete and Eradia you gain.

The real triumph of Square’s treatment of this apocalypse is in these moments of individual redemption. The constant time limit forces you to weigh the merit of each soul to be saved, and the way most characters relate to the end of the world speaks to a mature understanding of end-of-life psychology. After 500 boring years, most have stopped begging for salvation. They are just tired, and once you save their souls, they generally welcome death.