Yesterday, the creator of Flappy Bird removed the game from Google Play and the Apple App Store. That same day, over 140 games featuring the word “Flappy” appeared in the backend of a popular mobile-monetization platform.

The clones are coming.

Chartboost, a mobile development platform that helps studios acquire players and generate revenue, believes it has seen the future. It has noticed something strange happening in its backend dashboard, and it portends an onslaught of Flappy Bird clones.

“Following a fairly noisy weekend with the news surrounding the success and eventual removal of Flappy Bird, Chartboost noticed some interesting activity on our platform,” Chartboost revenue officer Clay Kellogg told GamesBeat. “On Saturday, we noted there were 35 apps added to the Chartboost dashboard that included the word ‘flappy,’ and we woke up Monday morning to there being over 140.”

That means that since the creator of Flappy Bird has removed the game from Google Play and the iTunes App Store, which he did on Sunday, a number of developers have at least begun work on games with the word “flappy” in the title. 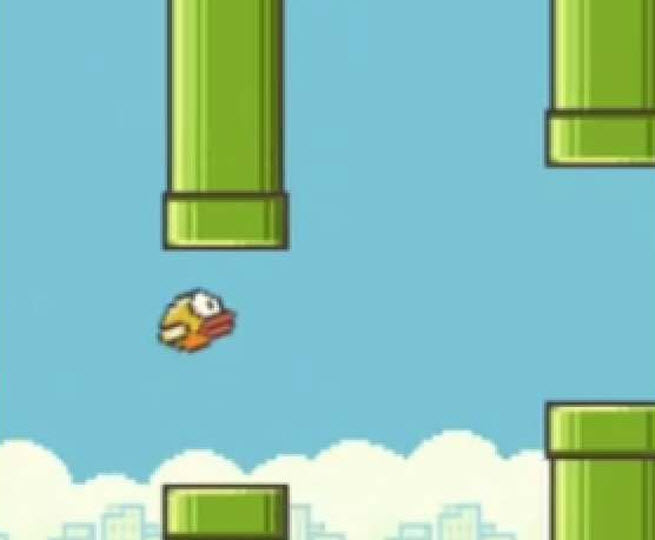 Above: The original Flappy Bird.

Flappy Bird is an exceedingly simple smartphone game. It has players tapping on the screen to keep a rather graceless fowl afloat. Green pipes that block the bird’s way and only leave a small gap for him to pass through make this even harder to do. Somehow, whether it was potentially fake reviews or the visual similarities to the Mario series, this free-to-play game made it to the top of the most-downloaded charts on both iOS and Android. That brought it millions of downloads, which brought creator Dong Nguyen more than $50,000 a day in advertising revenue … and lots of unwanted attention.

In a tweet a few days ago, Nguyen explained that the attention was all too much. He was taking the game down because he just wanted it all to go away. As of yesterday, you can no longer find the original Flappy Bird on Google Play or the App Store.

This has left a gap in the market. A gap that opportunistic developers are not gonna pass up.

“To clarify, this doesn’t necessarily mean there will be 140 new and similar [Flappy Bird clones] in the app store next week,” said Kellogg. “Often times, game developers install our SDK before the game goes live, to ensure that at launch they’re set up to optimize their game for success.

“We think the activity on our platform and the general enthusiasm for the Flappy Birds story is indicative of the indie developer spirit. Anyone can build a game and have it succeed beyond their wildest dreams. But be prepared, in a hits-driven business, success breeds imitation.”
Success has already bred imitation. A number of clones already populate the market.

With Flappy Bird gone, people searching for it are getting results that feature a game called “Clumsy Bird,” another subtly titled “Birdy Flap-Flappy Bird fill-in,” and “Flappy Bird Revenge!”

Clumsy Bird is currently the seventh most-downloaded game on the Android Google Play store. Another Flappy Bird clone called Ironpants is fourth on Android’s most-downloaded chart. That game, while not sharing the name, has just about everything else in common with Flappy Bird. It has a pixelated superhero that players must help guide through gaps by tapping the screen. It has more than a million total downloads and 18,000 reviews. When Nguyen took down Flappy Bird, it had over 500,000 reviews.

Other, more ironic developers have released their own clones that are probably better described as parodies. For example, the tech group responsible for the Dogecoin cryptocurrency made a web-based version of Flappy Bird that features the Doge meme instead. Indie developer Darius Kazemi, meanwhile, made a text-only version of Flappy Bird that you can also play in your browser:

here. I made a flappy bird clone. enjoy http://t.co/Vv4Uwn5Dst