Most superheroes have a line they won’t cross. Despite what Man of Steel would have you believe, Superman doesn’t kill. Neither does Spider-Man. The web-slinger even has a mantra for this, thanks to six simple words from his late uncle Ben: “With great power comes great responsibility.”

That saying could also apply to Infamous: Second Son, the third game in developer Sucker Punch Productions’s open-world superhero series. Out on March 21 exclusively for the PlayStation 4, Second Son stars Delsin Rowe, a 20-something graffiti artist whose life goes from ordinary to extraordinary when he accidentally absorbs his first supernatural ability from a Conduit, a person with superpowers.

Past Infamous games had a binary morality system: You were either absolutely good or absolutely evil. Certain elements of the plot would change based on this choice, and in Infamous 2, it determined which kind of powers you could play with. But with Second Son, Sucker Punch is introducing a bit more nuance. In addition to changing Delsin and introducing different plot points, your choices will now affect the way other characters grow.

A few days ago, I got a chance to see how this system works during a short hands-on demo. It starts right after Delsin meets a wanted criminal, Abigail “Fetch” Walker, and absorbs her neon powers. The scene pauses during the middle of a heated conversation, giving you time to contemplate a crucial decision. From there, the first mission with Fetch branches off into two different paths depending on what you do with her. 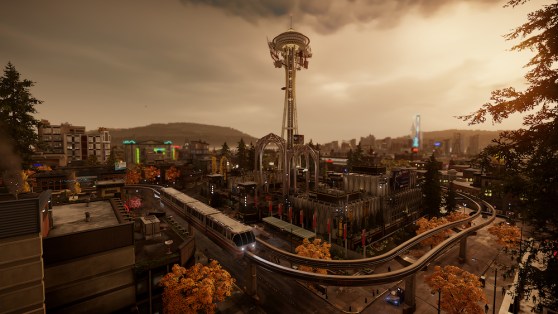 Above: Infamous’s version of Seattle.

If you redeem Fetch

Holding down the L2 button brings up the redemption path, which comes with a brief description that says Delsin will help reform the troubled Fetch. After a brief argument with his brother Reggie — a cop who just wants to imprison her — Delsin cools off and tells him that he’ll take responsibility for Fetch. The demo then moved to a rooftop scene, and you find out that Delsin and Fetch are trying to bust a drug deal going down in the nearby harbor.

This is where I first got a taste of Delsin’s neon powers. It’s beautiful to see in motion: Colorful rays of light trail behind you when you use it, and the way you absorb neon from business signs to replenish your power meter looks exactly like it does in the trailers. Pressing the circle button makes Delsin run like The Flash, running fast enough to scale buildings and jump several stories into the air. It’s a convenient way to travel around Second Son’s version of Seattle. Square is your melee attack, and it transforms Delsin’s metal chain into a laser sword.

Neon came in handy while fighting in the harbor, where a lot of enemies were far apart from one another and separated by the docks. I used neon to quickly run from one area to the next, defeating them with laser grenades or precise blasts from my hand — you can aim it like a sniper rifle and zoom in on your targets.

When I wasn’t fighting, Fetch and Delsin chatted over their headsets. The tone of their conversation was friendly, with Delsin uttering a joke or two to try and get Fetch to open up about her life. After finding the drug stashes and marking their locations with graffiti (by tapping the controller’s touchpad), Fetch destroys them with her neon powers, and the duo move on to follow a suspicious truck. The mission ended once I found the truck in an alleyway.