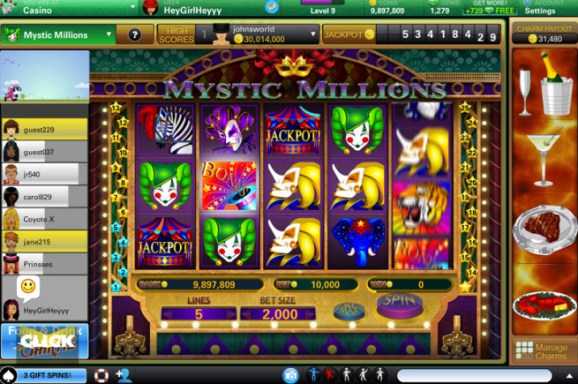 Disclosure: The Dutch government paid my way to Casual Connect Europe, where I will be moderating a talk. Our coverage remains objective.

AMSTERDAM — FlowPlay has created its own platform dubbed Vegas World for social-casino virtual worlds. And now it has partnered with Joju Games, which will use the platform to launch Fringo, its own take on a social-casino title combined with bingo.

The developer is making the announcement at the Casual Connect Europe game conference in Amsterdam. FlowPlay hopes to cash in on the popularity of social-casino releases by making it possible for more developers to quickly enter the market. But the question still remains: With more than a hundred such games on the market, does the world need another social-casino offering? It depends on how big the market will become. Eilers Research says the social-casino game market hit $2 billion in 2013. SuperData Research estimates it will be $4.4 billion by 2015.

“The industry is incredibly saturated, and developers are hungry for a way to differentiate their social-casino titles,” said Derrick Morton, chief executive of FlowPlay. “True innovation will come when developers expand beyond single-player slot games to offering unique, multiplayer titles that foster a truly social experience.”

FlowPlay’s white-label platform offloads a lot of work that developers would otherwise have to learn. It also allows them to differentiate themselves with an online community. Joju Games will use the platform to launch Fringo, which features a fruit-themed world with a fusion of slots and bingo. FlowPlay said that Joju will be able to cut its game development cycle in half because it now gets access to FlowPlay’s infrastructure, analytics, and monetization tools.

FlowPlay has created game distribution integrations with every major Web and mobile platform, including WildTangent, Yahoo Games, Google Play, iTunes, the Kindle store, Facebook, and smartphones and tablets. It has in-game advertising partners that allow developers to integrate and monetize in-game ads from eight partners. It has an established payment system with a network of more than 20 different payment providers, including all major credit cards and PayPal. It has an analytics and reporting dashboard with 300 different metrics. Developers can use it to analyze gameplay and revenues based on player location, activity, platform, and payment method.

It will be interesting to see if the business model works for Seattle-based FlowPlay, which developed the technology in 2008 to create a virtual world for teens. But the virtual world market dried up and social-casino offerings became hot, partly because they are theoretically a gateway to the much more lucrative online-gambling market. Casino companies such as Caesars and IGT have been acquiring social-casino games on the promise of building a larger online empire. FlowPlay launched its own Vegas World online world in 2012. And now, Joju will be its first platform partner.

FlowPlay argues that single-player social-casino games are a saturated market. But with the Vegas World technology, developers can build unique, multiplayer efforts. Players can interact with other players in casino-game rooms and compete against friends

Joju Games, headed by developer Juan Gril, has more than 50 casual games such as Bingo Blingo.

“In the highly competitive casual-games market, the ability to leverage FlowPlay’s platform to decrease both the time and budget needed to bring Fringo to market was a no-brainer,” said Gril, founder and studio manager at Joju. “FlowPlay’s comprehensive development platform and industry-high revenue per monthly active user were key factors in our partnership. Fringo is already seeing great success, and we’re looking forward to bringing additional social-casino games to market with FlowPlay.”

Morton said, “Juan and Joju Games turned to our industry-proven technology platform to take their social-casino game to the next level. Their deep experience developing incredibly successful casual games makes them an ideal partner to transform the social-casino industry as we know it today.”

FlowPlay started in 2006, and it has funding from Intel Capital and the creators of Skype.