Yerdle, an online store that wants to be the eBay of the sharing economy, is expanding beyond its initial markets and going national. Its goal: to have Americans ask the question, “Why shop when you can share?”

Today, the marketplace began offering national low-cost shipping of $2 to $4 for users who want to get and give things through a swap of credits.

Givers of things get points once those things are sold, and you can use your points to buy products, either via an auction or a “get it now” purchase. You get 250 credits just for joining. A vintage canteen, for instance, costs 30 credits; and five Tori Amos CDs, if you’re so inclined, go for 125 credits.

Items are offered for bidding up to a week, and a daily email shows a selection of new things to get. If the company has its way, “yerdle” will become a verb for giving, getting, or borrowing anything for free.

Along with the national shipping, the company is unveiling an updated iOS app with enhanced discovery functions, a new home screen, a new social activity feed, and an easier-to-use shopping cart. An Android app is on the way, and a website with limited functionality is up. 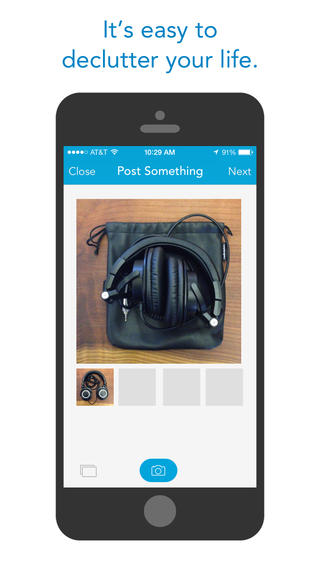 The founders have backgrounds in doing more with less. Adam Werbach is the ex-president of the Sierra Club and founder of San Francisco-based sustainability consultancy Saatchi & Saatchi S. Andy Ruben was the chief sustainability officer and head of global strategy at Walmart, and Carl Tashian was part of the founding team of Zipcar.

Werbach, who is now head of product at the company, told VentureBeat that the goal “is to displace 25 percent of what people are buying now,” based on research the team did on what unused items people in San Francisco had in their closets.

With shipping being done at cost and a moneyless credit system, Werbach said the business model will involve selling a small number of credits to users who prefer to go that route. Currently, the site has about 25,000 members, mostly in the San Francisco area.

The target customer is “someone who is looking to buy a new snowboard on Amazon,” Werbach said, “but would rather find it here.” Why buy it on Yerdle and not used on eBay? Because, he said, “People like to be able to shop without money, earn credits, and de-clutter their lives.”

$5 to $6 trillion in potential inventory

Yerdle joins a growing group of social sharing companies that include Airbnb, Taskrabbit, Zipcar, Tradesy, and Uber. Ultimately, Werbach said, “The goal of this sharing or circular economy is helping to stop waste so that seven billion people can live on this planet.”

Mitch Lowe, a Yerdle investor and founder/ managing partner of Greenstart, told us that the sharing economy represents a “fundamental shift, and Yerdle is the first to do this across categories of products.” He also described a big attraction for the investors: “There’s an estimated $5 or $6 trillion in potential inventory in closets around the world.”

The site first launched in San Francisco on Black Friday 2012 with 10,000 items and peer-to-peer delivery, followed by a rollout in the New York area in winter of last year. The company has been backed by $1.7 million in an initial seed round by The Westly Group, Claremont Creek Ventures, Greenstart, and Silicon Valley angel investors.