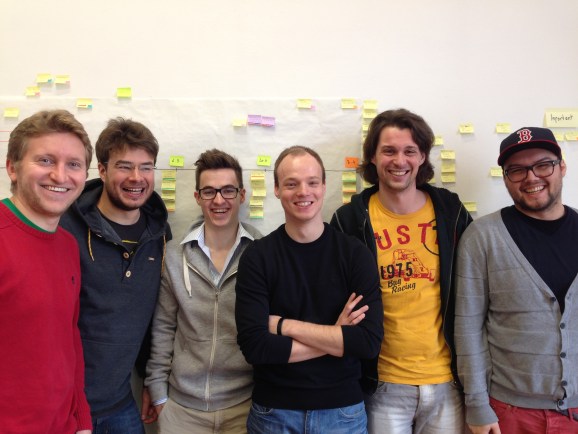 Codeship chief executive Mo Plassnig, third from left, with the rest of the Codeship team.

As founder of STARTeurope, a company that puts on startup events like the Pioneers festival, Mo Plassnig has seen how slowly software companies release new software.

And that gave him a startup idea of his own: a simple and speedy way to test code and deploy it on a public cloud. In 2011, Plassnig started Codeship along with Manuel Weiss and Florian Motlik.

The six-employee startup has since taken aboard hundreds of paying customers, including Crushpath, Synack, and Treehouse. And now it’s taking on $2.6 million in new funding.

Sigma Prime Ventures is leading the round; Boston Seed Capital and Devonshire Investors are also participating, Plassnig, Codeship’s chief executive, wrote in an email to VentureBeat.

Some of the new money will help expand the Codeship team in Austria, where the company started, and build out a new Boston headquarters. (Codeship likes Boston; it went through the Techstars Boston accelerator program.)

On the product side, the goal is “making it as easy as possible to deploy wherever you want, mainly public clouds,” Plassnig told VentureBeat.

But beyond adding more external deployment options, Codeship wants to allow developers to use its product to quickly test and deploy their code on their companies’ on-premises data center infrastructure.

The thing is, other companies play in the sphere Codeship plays in, which is known as hosted continuous integration and deployment. Competitor CircleCI just raised $6 million. Drone.io, which received backing from the enterprise-focused Alchemist Accelerator, recently released its continuous integration software under an open-source license. Drone is striving to stand out by building a new set of tools for the use of shipping code with hot open-source technology called Docker. Meanwhile CloudBees and Semaphore also provide continuous integration as a cloud-based service.

As more companies come to believe in the philosophy of frequently shipping code into production, Codeship will want to do its best to stand out. Adding features will help, but Codeship might want to set aside some of its new money to market itself more, too.