When you’re desperately trying to eject out of a giant burning robot, the last thing you’ll probably think about is how your impending death plays into the story. But just as Titanfall isn’t your typical online shooter, it also doesn’t tell a story in the typical kind of way.

Out on March 11 for Xbox One and PC and March 25 for Xbox 360, Titanfall is a multiplayer-only first-person shooter that pits pilots and bipedal robots (Titans) against each other. Instead of a traditional single-player mode, it has a campaign that puts real players on both sides of the conflict, and the plot unfolds through a series of different missions.

Bits of storytelling elements also seep through what developer Respawn Entertainment calls its “classic” multiplayer suite: variations of game types like deathmatch or last man standing. These moments are so subtle that you might not see or hear them until you’ve poured dozens of hours into the game. Since I didn’t have that kind of time at a recent preview event, I asked lead designer Justin Hendry and lead artist Joel Emslie to help guide me. They revealed just how Titanfall uses its characters and multiplayer levels to flesh out its two warring factions, the Interstellar Mining Corporation (IMC) and the Frontier Milita. 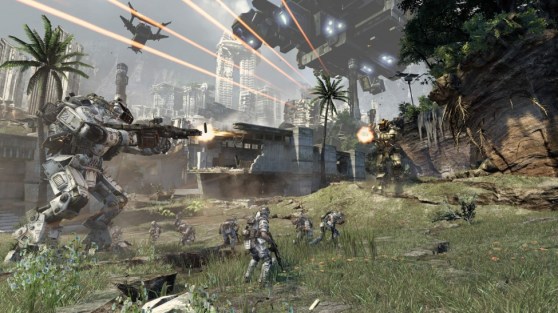 Above: A.I.-controlled teammates fight with you during battles.

During battle, you hear dialogue coming from computer-controlled Grunts (normal soldiers) and Spectres (human-sized robots that attack Titans). They’re on the lower rung of Titanfall’s social ladder: As a pilot, you’re part of an elite group of warriors, and the Grunts look up to you. According to Hendry, Grunts and Spectres put on a “show” and add some cinematic flair to the battles — that’s why they’re so easy to kill.

“And then they also react to the players; they’ll comment on the players,” Hendry said. “They’re there to make the players feel more important. If you jump on an enemy Titan and rodeo them in front of grunts, you’ll hear them [say stuff like]  ‘Oh, shit!’ If you save them, they’ll thank you.” 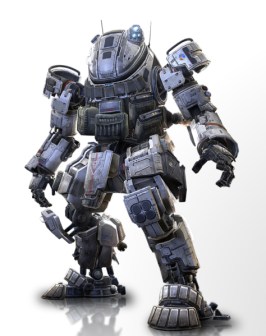 Above: The Ogre class of Titans.

I stumbled into one of their conversations by accident. During one of my first Hardpoint matches (where teams have to capture territories), I followed a group of Grunts to the nearest control point. As we stood there waiting to capture it, they started talking about a military draft. One of the guys sounded angry about it, and the others agreed with him. The conversation ended before they left me and ran somewhere else across the map.

It took a second for me to realize what just happened. In other games, this type of idle chatter is normally found in scripted scenes filled with dramatic set pieces and explosions. But because of the way Titanfall sets up its multiplayer matches, the conversation felt natural. The Grunts help sell the idea that you’re fighting in a massive war,= and not just a game against random strangers online.

“If you listen to them, you’ll get even more [of a complete picture] of the universe,” Hendry said. “They’ll talk about everything from what’s going on in the background to what the current campaign story is to relationship woes to whatever.” 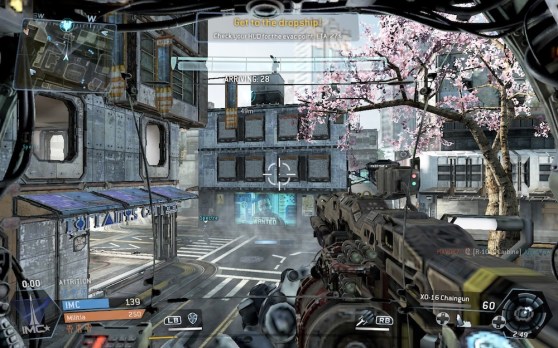 Above: Angel City in the Titanfall beta on PC. (Don’t worry about the low-res textures. My PC’s specs aren’t great).

‘Every level has a story’

Titanfall’s maps also play a pivotal part in shaping its tale, and you can see this with the two maps available in the beta. One of them, Angel City, is the kind of run-down place where, in lead artist Emslie’s words, you would see “a weapons deal going down.” It has a rigid, grid-like structure, with tight corners flanked by a series of three- to four-story apartments and shops. The streets are barely big enough to let one Titan through, let alone several of them during a heated battle. It also feels eerily empty, as if Angel City’s citizens left only hours before you arrived.

In contrast, Fracture is a complete mess. Only a few of its mansions and homes still stand, with many buildings reduced to rubble. Some rooms are still intact, and you can spot evacuation notices and other details that suggest its people also didn’t have much time to leave.

“[Fracture has this architect] Frank Lloyd Wright vibe, where the privileged used to live,” Emslie said. “But the IMC realized that they wanted to frack that planet. So they come in and just evacuate everybody and tell ’em to get the hell out of there. You can even go into some of those domiciles and see kids’ crayon drawings on the wall.”

Respawn hopes that players will eventually pick up enough pieces to get a sense of what’s going on.

“There are parts of Titanfall where we’re trying to show the friction between the IMC and the Militia,” Emslie said. “Some of the levels you’ll see later when the game actually comes out shows the result of that struggle or the atrocity [that occurs when] a giant corporation, out in the Goldilocks [star] system, pushes its muscle around on the settlers. Each level will serve a purpose visually — even in the campaign multiplayer. Every level has a story.” 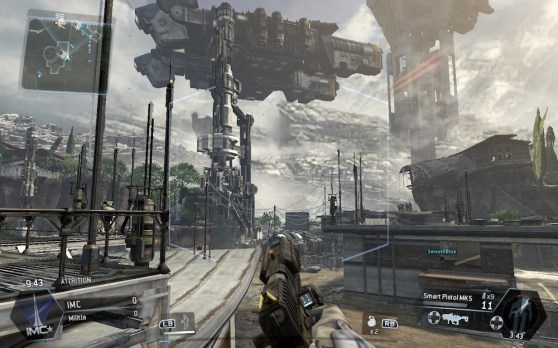 Above: Not much is left in Fracture after the IMC invaded.

Choose what you want

The story is there if you want it, but Respawn also understands that you might be too busy shooting other people in the face to care about either the IMC or Militia.

“We didn’t want to go down that route of like, ‘Here, we’re gonna try to tell this very intricate thing. Don’t miss anything!’” Hendry said. “It’s kind of like ‘Hey, there’s all this stuff going on. Take in what you will. Look at the world, look at the universe, look at the guys and listen to what they’re saying. Just put the universe together and it’ll all make sense.’”