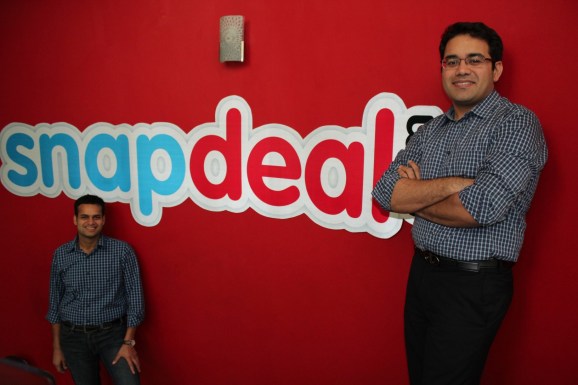 Snapdeal is set to pull in $500 million in revenue this fiscal year and is likened in the press to eBay and Alibaba. Bahl confirmed exclusively to VentureBeat that he is plotting to take the company public in the U.S. soon. It will likely list in the next 12 to 24 months, although Bahl revealed in an interview that “it could be sooner.” The Wall Street Journal first published a report on the company’s funding intentions in January of 2014 but did not receive a confirmation from a spokesperson.

This week, I caught up with Bahl to discuss his IPO and expansion plans. Bahl, who recently celebrated his 30th birthday, had plenty of thoughts to share about managing relationships with investors and the state of the market in India. Most impressive of all is his founding story, which demonstrates first-hand that a Silicon Valley-centric perspective may soon be a thing of the past.

Like most entrepreneurs, Bahl has experienced myriad failures and setbacks.

He graduated from Wharton business school with job offers from both Deloitte and Microsoft. But neither company could secure him a visa to remain in the U.S. Reluctant to give up, Bahl forged a high-profile campaign to rationalize the visa program for entrepreneurs. Those efforts failed and he returned to his native India with no set plans for the future.

That rejection was the best thing that could have happened to Bahl.

He joined up with close friend and cofounder Rohit Bansal to brainstorm ideas for an e-commerce venture. Bahl rigorously studied online businesses, such as eBay, Zappos, Alibaba, and Amazon. He borrowed certain aspects of these business models, while shedding others. (Note: eBay would later invest $50 million in Snapdeal.)

Bahl realized that the e-commerce market in India was extremely fragmented. Back in 2010, it was a combination of mom-and-pop shops and a few nationwide retailers. E-commerce was a tricky bet as shoppers in India are notoriously wary of using debit and credit cards online. About half of online transactions in India are paid with cash on delivery.

But Bahl saw a gap for a company that could select the best independent businesses and sell their high-quality products online. Snapdeal was carefully designed to instill consumers with confidence in online retail. Snapdeal only sells new products, which can be returned within seven days free of charge.

Snapdeal’s model is most similar to China’s dominant e-commerce company Alibaba. Employees screen potential buyers before approving them to sell their wares on Snapdeal. The ideal seller should expect to enter into “a long term relationship” with Snapdeal — ideally an exclusive one, Bahl said.

Once Snapdeal has approved a seller, it will handle everything else. Snapdeal deals with transactions, shipping, and fulfillment (merchandise will arrive in a Snapdeal branded box). Buyers never contact the sellers, as Snapdeal takes responsibility for any postage and packaging issues. Bahl said the company doesn’t plan to sell its own inventory anytime soon.

Running an online business in India

Snapdeal offers sellers in India access to a vast pool of buyers and a built-in web presence. An estimated 150 million people in India have access to the Internet.

Snapdeal also boasts a strong mobile offering to cater to shoppers on the go. According to Gartner’s report, smartphone sales in India increased by 166.8 percent in the fourth quarter of 2013, making India the fastest-growing smartphone market in that quarter. According to Bahl, mobile sales account for about 30 percent of the business, which does not include tablets. “The tsunami of new users are on mobile,” said Bahl.

Bahl said he believes he can build a company that can generate a billion dollars in annual sales (the holy grail for e-commerce) in India. He may expand the company to Australia, but that’s not a high priority at present.

Snapdeal has grown its team to 1,200 employees, which is modest given its revenue. The company is able to retain its top developer talent by offering a few perks: Employees with a long commute get a free Wi-Fi enabled car service. Bahl said it frees up a few hours of time each day for workers to answer email or rest. He describes New Delhi as frenzied and dynamic with plenty of commotion and traffic on the street. “My job is to insulate my company and people from any friction in the environment,” he told me.

Bahl is frequently on the road, as his other priority is to court foreign investors and prepare the company for a successful IPO. “We are the market leading company in the largest growing space in India,” he said. “People who didn’t invest in Alibaba won’t want to miss the one in India.”

Since 2010, Snapdeal has raised a total of $202 million in funding from eBay, Intel Capital, Bessemer Venture Partners, and others.