It was nice of Donkey Kong Country to return and all that, but the act is already starting to feel stale.

Donkey Kong Country: Tropical Freeze, coming out on Feb. 21 for the Wii U, is the follow-up to the Wii’s Donkey Kong Country Returns, which was the first entry in the franchise since the days of the Super Nintendo. And while developer Retro definitely layered Returns with a thick coat of nostalgia, it stood on its own merits as a fun, 2D platformer. Besides, it was sort of cool to play another Donkey Kong Country again.

But you can only play that nostalgia card once. Just look at the New Super Mario Bros. series, which was fun and retro at first but has quickly become one of Nintendo’s laziest and predictable franchises. And now Tropical Freeze, despite offering plenty of platforming thrills and challenges, feels like the start of the same trend.

Tropical Freeze might not have the novelty factor of its predecessor, but it’s still a great platforming experience. Levels offer plenty of challenge, with lots of extra lives and checkpoints to keep you from becoming totally frustrated after each of your (many, many) deaths. You’ll learn to master fun tricks, like jumping out of a roll for longer distance and bouncing off enemies for a little more oomph.

You’ll also find plenty of secret areas and hidden items scattered about, most of which are difficult to find. They’re fun to discover for completionists, but you also don’t miss out on much if you’d rather just run through the levels.

Developer Retro Studios does a good job of keeping things fresh, offering interesting twists and gimmicks every so often amid the pure platforming. The mine cart stages are a highlight, offering cinematic, fast-paced journeys through caves filled with pitfalls. Swimming stages, levels where you control a rocket-fueled barrel, and other fun gimmicks also add variety. 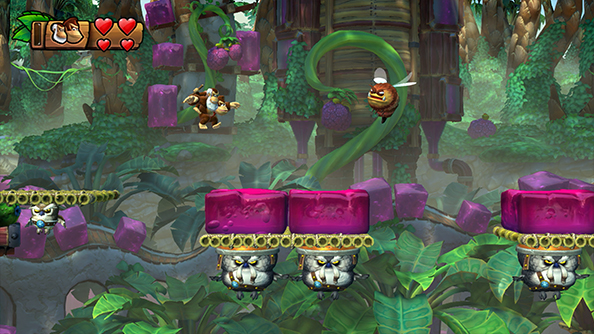 Above: Goo always makes you bounce in these sort of games.

The jump to HD has been good to Donkey Kong. The big ape has never looked better, with his fuzzy fur especially standing out, but the levels and backgrounds look extra gorgeous, especially those that feature hazy sunsets, an aurora-filled sky, and blazing landscapes.

Each boss fight acts like it’s the final encounter of any other game. They all feature multiple stages with different patterns to memorize, which means that they’re all very, very long. It becomes tedious to jump around the predictable, boring first two-thirds of every battle before dying toward the end and having to start over again.

I wish Tropical Freeze had just copied the Mario model, with each boss, except for the last, taking a mere three hits to kill. Instead, each one feels like a long, drawn-out chore. It was a misguided attempt to make each boss feel epic, and it’s just annoying. 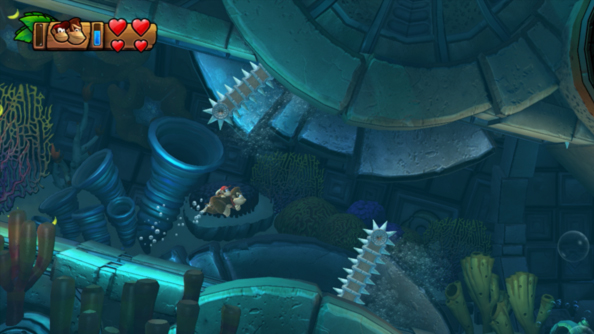 Above: Swimming levels might seem frustrating, but they offer a nice change of pace.

The differences between partners

While Donkey Kong Country Returns only had Diddy Kong as an optional second player, Tropical Freeze adds Dixie and Cranky Kong. Each one has a special ability that gives DK a little platforming help. Diddy lets you hover. Dixie also hovers and lifts you up a bit. And Cranky can bounce on his cane for extra height.

The variety sounds nice in theory, but Dixie’s ability is so obviously better than the others that you’ll just want to stick with her. I mean, she can hover and give you extra height while the other two only offer you one or the other. It’s a weird balancing misstep.

Tropical Freeze is the first game to let you play as Cranky Kong. The character had endeared himself to players because he was such a humorous part of the series. He’d always go on about how games were much better “back in his day” and, well, just sort of act cranky in that lovable, grandfatherly way.

But now, Cranky is just another silent protagonist. His best trait is gone. In fact, he doesn’t really do anything to indicate that he’s the least bit cranky. It’s nice to see him playable, but what’s the point if you neuter his character?

Doesn’t utilize the Wii U

It seems unfair to place the weight of a system’s troubles on one game, but the fact is that Tropical Freeze could be the Wii U’s only major release until May, when Mario Kart 8 comes out. Now, the big selling point for Nintendo’s newest system is the tablet-style GamePad, but Tropical Freeze makes no use of it outside of enabling you to play on the smaller screen.

If you’re playing on your TV, the tablet screen simply goes black. Other 2D platformers for the Wii U, such as New Super Mario Bros. U and Rayman Legends, have done some interesting, innovative things with the touchscreen. It’s disappointing to see Retro ignore the console’s biggest feature, especially when Nintendo desperately needs to justify the game pad’s existence and doesn’t have another first-party title coming out for months.

Tropical Freeze does little to justify the Wii U’s existence, but it’s still mostly a fun, challenging platformer. Fans will certainly enjoy this difficult, beautiful romp through Donkey Kong’s islands, but it will frustrate less-enthusiastic players.

I’m happy that Donkey Kong Country returned, but I think the series can go away for a while again. As entertaining as Tropical Freeze is, it doesn’t offer anything substantially different or creative to warrant another follow-up.

Still, if you’re a Wii U owner, this is one of your few software choices this year until May. Don’t worry — you will enjoy yourself, but don’t expect this unambitious (although polished) platformer to increase the Wii U’s installed base.

Donkey Kong Country: Tropical Freeze comes out on the Wii U on Feb. 21. The publisher provided GamesBeat with a code of the game for the purpose of this review.