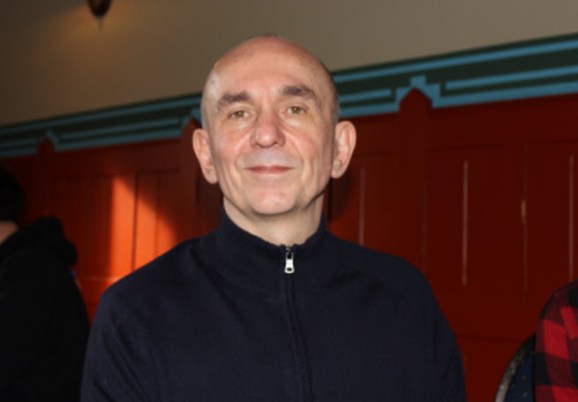 Disclosure: The Dutch government paid my way to Casual Connect Europe, where I moderated a session. Our coverage remains objective. 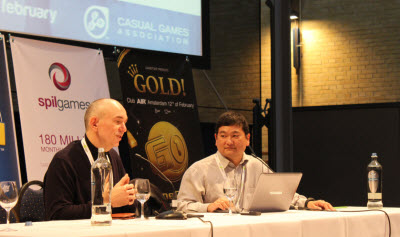 Above: Peter Molyneux and Dean Takahashi at Casual Connect Europe

AMSTERDAM — Peter Molyneux is an elder statesman of video games who has made the leap from consoles to mobile gaming. The creator of titles like Fable is now working with a team of 30 people on Godus, a mobile entry in the god game genre that Molyneux pioneered with titles like Black and White and Populous. He is known for the silky voice that he has used to tout — and some critics say over-promise — the games that he has worked on.

But now he’s using that voice to both promote Godus as the best game he has ever made and caution the creators of mobile titles about monetizing free-to-play releases (where the game is free and the player pays real money for virtual goods) in an honest way. He fears that many offerings, like the recent Electronic Arts remake of his own Dungeon Keeper, are milking gamers with crass money-making schemes.

At his new company, 22cans, Molyneux is trying to create games that will successfully monetize because players are wiling to invest in them as if they were hobbies. His new projects are humbler efforts than the ones he had undertaken in the past. Molyneux once led 300-person teams at Microsoft’s Lionhead Studios, but at his new startup, he has just 30 people. 22cans raised 526,563 British pounds ($881,571) in a Kickstarter campaign to fund Godus.

We are eager to see if Molyneux can show everybody the right path to making games — as he had done so many times in his career. Godus is available in beta form now on Steam, and it is still undergoing further development.

I interviewed Molyneux in front of a crowd at the beginning of the Casual Connect Europe game event last week in Amsterdam. Here’s an edited transcript of our on-stage interview as well as a one-on-one interview afterward. 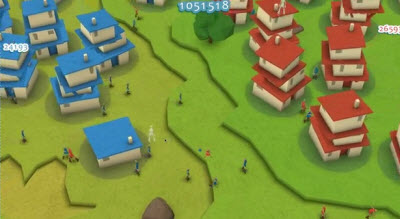 Above: A fight taking place in Godus.

GamesBeat: How have you seen the game industry evolve since you started making games?

Peter Molyneux: It’s been an amazing journey. To go from … I’ve been in the industry doing games since the BBC Micro, the Acorn Atom, the Commodore 64. Most of the people in this room were sperm at that time. Did anyone here play games on the Commodore 64? Wow, that’s pretty playful sperm.

In other ways, it’s stayed the same. This industry has always tried to solve a simple, fundamental problem and that is how to invent new stuff and engage more and more people. It’s been this 20-year journey of incredible experiences. But the amount of creativity you have to put in each time remains a constant.

GamesBeat: What’s the biggest game development team you ever had?

Molyneux: The biggest was me running Lionhead at its peak. That was about 305 people. I’d say that was, for me as a creative, one of the most hellish times of my life. Normally running a team is like herding cats. This was like herding the entire African plains. You don’t know what people are doing. Some people are doing one thing. The people over there are doing something else. We ended up diluting our creative impetus. That was a nightmare, to be quite frank with you. 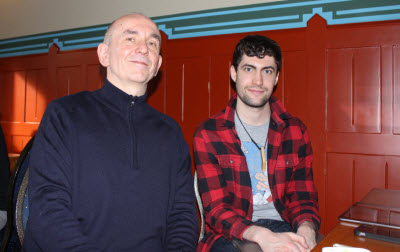 GamesBeat: Does it feel like, with 30 people, you don’t have enough people to do what you want to?

Molyneux: The problem is, now…. There was this unending, demanding necessity to grow. The reason we’ve got 30 people … if I could talk about how those people break down, we’ve got three main designers. We need three of them, because we need three different minds.

At the back of the hall here, there’s [22cans game designer] Jack Attridge. … He’s into the experience, into what people are feeling, how it feels to touch things. He doesn’t give a shit about schedules. He’ll just add a feature in two days from launch. On the other side, we have someone called Jamie Stowe. He used to be a designer on Assassin’s Creed. He’s super logical. It’s all about the planning side of design. And then in the middle, you have someone like me.

Now we have the real world. Consumers don’t give a damn about what device they’re playing on. They just want to play it everywhere. They want to be playing on the console and then take it off to the bus. This team is made up of enough people to support that multiplatform release. And then, you have a whole army of artists.

GamesBeat: We’re not at the point where you can write it once and run it everywhere?

Molyneux: Another thing that’s changed, and this has radically changed, is that you don’t finish anything. Releasing something is just another day of development. What we’ve done with the game we’re developing now, we went from the public exposure of Kickstarter to the even more public exposure of Early Access, and then from those two inputs, we’ve rewritten, redesigned, and completely reinvented the game we’re making.

If you have hundreds of thousands of people playing your game, and you realize that your assumptions about the game were all wrong — that it’s literally moving the needle from one end to the other end — you’ve got to do that. You have to be radical and brave. So often in development, whether you’re developing on one console or all across so many platforms … there’s this fatal thing in development, where you all meet and go over a feature, and you look at the analytics. Not only the analytics about retention, which I’m all for, but most analytics don’t do the fundamental thing they should. They don’t make the game better. They squeeze more money out, certainly, but my point is, can we use analytics to make the game better? To make people enjoy and invest more time in the game?

GamesBeat: I think we have a lot of would-be game designers here. You mentioned earlier that you view your role as a sort of curator of design ideas.

Molyneux: That’s the point. The last thing, so often, a game needs, is another idea from some crazy old shit like me. What you’re doing is using those analytics, using people’s suggestions from Kickstarter, using suggestions from Early Access, and saying, “You know what, that idea is 10 times better than mine. That idea plus this way of working with it is a lot better.” You end up being a curator. You end up with 100 ideas in front of you, and you have to say, “This is the one we’ll focus on.” It’s not my idea. It’s the community’s idea. And you have to have people behind you who are willing to be that reactive.

If you look at something like Godus, we implemented one version of it on Early Access, and then we’ve totally changed every single motivation in the game. We’ve rewritten the simulation side of the game. We’ve changed what people do and how they do it. That’s because of the feedback, and because of me as a designer saying, “I had this idea. It was not right. This idea over here is much better.”

GamesBeat: You raised about $732,000 on Kickstarter for Godus. What has the Kickstarter aspect of the project been like?

Molyneux: It did raise that much, and that’s the key thing about Kickstarter. Unless you’re Chris Roberts — his project has been pretty amazing — it’s there to kick it off. Employing 30 people for a year, or for 18 months, is going to cost a lot more than $700,000. But it kicks the project off. What we chose to do, which worked fantastically well, is use that Kickstarter money to take us from the closing of the Kickstarter to the launch on Steam Early Access.

The reason we did that was to help out with the funding, for sure, but if you are going to make a game which connects millions of people together, you need hundreds of thousands of people to play and test that game. Those were the reasons for releasing that way.

GamesBeat: Your critics on the Internet have argued that this project and some others have been over-promising. With Kickstarter, do you feel like you have to rein some of your enthusiasm in a bit, and give more detailed progress reports along the way as far as exactly what’s happening? 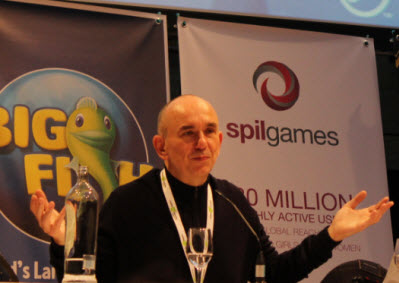 Above: Molyneux at Casual Connect Europe.

Molyneux: In a way it’s your fault, Dean, that I left Microsoft and started 22cans. I wanted to address this promises issue. I wanted to go out and say, “This is not a promise that I make.” This is exactly what I say to the team. “We’re going to go out and reinvent the god game and revitalize that genre.” When you go through Kickstarter, it’s almost impossible to hide. You’re making this contract with the people that pledge. That is a very visible contract.

With Kickstarter, if anyone here is brave enough to enter that, there’s a few rules that you kind of stumble across. No one tells you any of this, but you stumble across it. Rule number one is obviously what you’re alluding to. Don’t promise the earth, moon, and sun for $10,000. The temptation, when you go into Kickstarter, is that the first three days are wonderful, and you believe you’re a god. You go in your spreadsheet and think, “If every day’s like day one, we’re going to have suitcases of money arriving at the front door.”

Then, it dips into this slump. You wonder if you’ve been strangling kittens or doing something horrendous because no one’s pledging. That period of time, you’re tempted to say anything, add any feature, to get that curve to move up. You can look at this live, and it’s very scary. So, the first rule is, don’t promise things you cannot deliver. You have to have a budget. You have to say, “I’ll have this much money come in, and I’ll use this much money to do this.” Every time you add a feature, that money is diminished.

The second rule is, never ask for the money that you actually need. Ask for the money that’s going to kick your project off. The trouble with Kickstarter, what’s so terrifying about it, is their rule that if you’re a pound short of the target, you don’t get anything. The temptation is to go out there and ask for a million, when actually if you ask for 100,000, you’re much more likely to achieve it.

This amazing thing happens at the end of all the Kickstarter projects, you go from this high number of pledges into this slump, and then in the last five days it picks up again. I was intrigued about this, so I looked at all the people that pledged at the end of the project. 90 percent of those people had pledged to more than 10 Kickstarter projects. What that said to me was, a group of people use Kickstarter as a hobby, and they’ll keep on pledging money to successful projects because they want the stuff. So, if you have your target low and you exceed your target, you look like a project that’s worth investing in.

The last thing is, don’t panic. Don’t feel like you have to work 24 hours to get a demo out there. Just stick with your vision and be super clear about it.