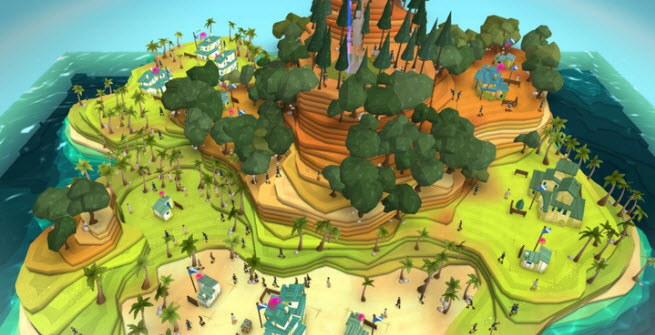 Above: Another screenshot from Godus.

GamesBeat: Does Godus feel like you’re back in the days of Populous? Are you thinking about how you did it back then and maybe making a different take on that kind of god game?

Molyneux: In a way, it is like Populous, but maybe not the way you think. Populous was made by myself and someone called Glenn. … We didn’t know who we were making it for. It actually ended up being played not just by the core gamers of those early days. It was played by a much wider audience than we ever thought.

Making Godus, I wanted to be as crazily experimental and insanely inventive as the original Populous was in its day. I mean, if you look at it now, it looks atrocious, but in those days it felt like it had that crazy inventiveness.

This is the core thing that I feel. We are in an almost blessed position in this industry, where all these new gamers, these people who have never played games before or thought of themselves as gamers, are coming in and playing games for the first time. If we don’t give them something that’s just wonderful, that’s superb and inventive and fresh and different, they’re going away again. They don’t care. They’re not loyal. They come in and try something, and, at the moment, they’re trying something brilliant like Candy Crush. Nobody can deny that’s brilliant in its juiciness. And the fantastic Supercell games. But is that it? Can we not take them somewhere else?

That’s what Godus is trying to do. It’s trying to say that we can approach things like monetization in a delightful way. It doesn’t have to be this caustic mechanic. We can approach the ability to connect people together in a completely new way. That’s what we’re trying to do with Godus. I don’t care if you call this is a promise. It’s not a promise. This is unquestionably the most wonderful, incredible, delightful, smooth experience that I have ever been involved with.

GamesBeat: I didn’t even have to push you to get that.

Molyneux: This is what I’m like when I get to the office in the morning. It drives the staff absolutely insane. There’s someone from 22cans in the back. You can ask him. He’s probably got a sniper rifle coming out of his backpack. 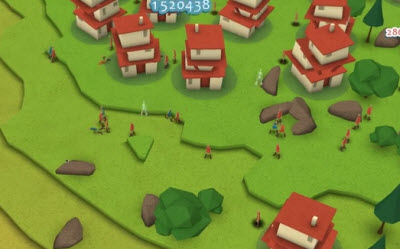 Above: In Godus, civilizations can fight.

GamesBeat: We’ve seen free-to-play games evolve. It seems like you have some interesting new ideas for how to do that with Godus. Dungeon Keeper also just came out from EA. I gather you weren’t really pleased with the way they did free to play.

Molyneux: I think “pleased” is the wrong word. Dungeon Keeper was meant to be this new take on who you were in a game. You were supposed to be the baddie and build these dungeons. Of course there was no free to play back then.

For me, there are two big problems with Dungeon Keeper. The first is, whenever I reminisce about something, whether it’s an old film or an old game or an old book, my memories don’t match the reality of the experience. When I came back to Dungeon Keeper, I expected Dungeon Keeper again. I expected a remake. I expected to be able to dig out the dungeon for free and fight other players. I expected all that stuff.

What Mythic and EA did — exceptionally well, I have to say — is they gave me a reinvention for the free-to-play world. I wanted, in Dungeon Keeper, to play and keep on playing. What they did with free to play, and what free to play does an awful lot of, it crucifies my patience. It just beats me up for being an impatient gamer. The whole of Dungeon Keeper was designed around digging it out quickly, building your rooms quickly, fighting and fighting again. That motivation is hard to match up with current free-to-play mechanics.

It’s an exceptional implementation in its look. There’s a lot of stuff I recall there from Dungeon Keeper. But the pace of the gameplay I find grating.

GamesBeat: What’s a better way to do free to play?

Molyneux: There’s two things. Again, this is something where we’ve sat down doing Godus and said, “We don’t want this free-to-play mechanic.” Free to play is the wrong word, for a start. There cannot be a term that’s less true about the current iterations of free-to-play games. What we want is a new term. That term is more like “invest to play.”

For me — and this is going to sound crazy, but it’s the way I think about it — I’ve thought a lot about free to play. What are we doing? We are tempting people to invest — and that’s a very different word, by the way, “invest” — some of their money into a game.

Now, if I walk into a supermarket, supermarkets have refined that temptation mechanic into a brilliant art form. The first thing you see is the vegetable aisle. It smells lovely. They walk you past the bread and it smells delicious. They’re tempting you all the time to spend some money. The skill and psychology and motivation to that has been refined over generations.

What we’re doing with consumers, we’re taking a huge hammer and smashing them with it. We’re saying, “You will spend money! Otherwise you will not enjoy!” We’re treating our consumers like children. “You’re a bad person for wanting this so early! I’m going to punish you! I’m charging you five pounds because you want it now! Good children have to learn patience.” We’re beating our consumers up with that message. “Be patient or pay money.”

That’s not a delightful mechanic. That’s not going to get people to invest their money. What it’s doing is inevitable. It means that every consumer approaches the game and what’s the first thing they say? “I’m never spending any money on this game.” It’s like a supermarket putting the sanitary products at the front by the door. You walk in, and it smells of disinfectant. That doesn’t make you want to buy stuff, and that’s what we’re doing. That’s how crude these mechanics are. 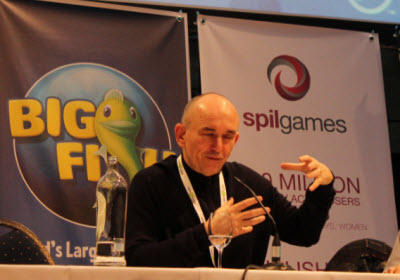 Above: Molyneux of 22cans.

There has to be a better way. … The first thing we teach people in these games is how to speed things up and spend things. That’s insane. Absolutely insane. So, we’ve gone back and asked ourselves, “How can we get people to invest in their hobby?” That’s all about setting people’s minds … their mindset and their motivation. You have to get that right.

Asking people for money, it’s not a right. You have to justify that. That requires a huge amount of design and analytics and all that stuff.

GamesBeat: What do you think of this indie resurgence we’re seeing? What are the challenges indies face when their games are one among millions in the app stores?

Molyneux: It’s an interesting time to ask that question when you’ve got Flappy Bird around. That’s the one-in-a-million shot. Yes, as an indie, it’s hard. As an entrepreneur, it’s very hard, whatever you’re making. But you know what? How many out of those millions are real, wonderful lost gems? I truly believe that quality and dedication and delightfulness will always shine through.

We have lots of stats about how there’s million apps on these devices and all that stuff. But there are 999,000 really rubbish apps. I don’t know many games that are lost gems. I know games like the brilliant Ico that came out on PlayStation, that wasn’t the commercial success it should have been. It’s one of the most beautifully balanced games, and it was a kind of lost gem. Unfortunately, now, in this industry, unless you’re Flappy Bird, it’s hard to do a quality experience unless you’re a substantial team of people.

Audience question: On a typical day, what sort of things do you take care of now?

Molyneux: It goes in rhythms. It depends what stage we’re at in development. At the moment, it’s about making sure that the polish of the ideas we put in games goes out to the team. Most days, I use a Mac and a hell of a lot of Keynote. I’m the world’s leading Keynote specialist. I don’t believe in documentation. If you can’t get an idea across to a member of the team in three sentences, the idea’s not worth anything.

In the morning I tend to do a playthrough of the game. I write up a spreadsheet — do this, change that, we need to worry about this bit of analytics. But if there’s anything more complex to talk about … for the moment we have a slight reinterpretation of one of our big mechanics, called settlements. Then, I’ll make a Keynote doc. That will be pictorially representing the idea. Coders and artists will never read text, but if you can show them a picture and give them an example they need to go. I spend three or four hours a day making those Keynote files. The rest of the day is rolling that stuff out to the team and just being generally grumpy.