Imagine the popular indie platformer Spelunky, only bloodier. Or Bubble Bobble with guns.

That’s designer Bo Blond Daugaard’s action-roguelike 99 Levels to Hell, a blood-happy PC game (out tomorrow, Feb. 19, for $5 on Steam) where players fight through 99 levels and nine boss fights to face off with the Devil at the end. Like other roguelikes, the dungeons are randomized, resources are limited, and death is permanent for your character.

99 Levels borrows a lot from indie developer Derek Yu’s cave-explorer Spelunky — that’s clear at a glance — but the two feel like very different games. In the former, the colors are brighter, the settings (a castle, for instance) are much moodier, and local Copenhagen, Denmark-based musician and horror game lover “Oldman” provides a metal soundtrack.

Daugaard is still worried people will see it as a clone or knock-off, he said to GamesBeat, since Spelunky released earlier in 2009. “Actually, I didn’t know about Spelunky when I started making 99 Levels To Hell back in 2011,” he said. “Originally, I set out to do a roguelike mix of Metal Slug and Bubble Bobble, and I think I kinda came pretty close.”

The Metal Slug influence is obvious — players run and gun. That’s one main difference from Spelunky: You always have an aiming reticule. “I chose to leave it in, even when you use the controller, to better let you know where you are shooting,” said Daugaard. “The character gets a bit small on the screen sometimes, so it helps your aim a lot.”

That doesn’t mean 99 Levels to Hell is necessarily any easier than Spelunky (which Daugaard called a “masterpiece”): I did pathetically bad in my time with it — worse than Daugaard said I should have done.

Above: 99 Levels in Hell’s player characters.

“99 Levels To Hell is more about action, getting a lot of kills, upgrading the gun the game gives you, and finding out how to use it. I wanted to create something with more kills and more action — without it being too difficult. You should be able to get to the first boss fight within the first few tries.”

Daugaard does cut players a break in case they struggle. Every time you beat a boss, you unlock a dungeon door that acts as a shortcut.

“There seem to be a trend in games that punish players a lot — Super Meat Boy, Spelunky, Dark Souls, and so forth,” he said. “So it seemed like the right time to make a game like that. I always loved that way of gaming. You get a real kick out of completing a level when the game is really hard.” 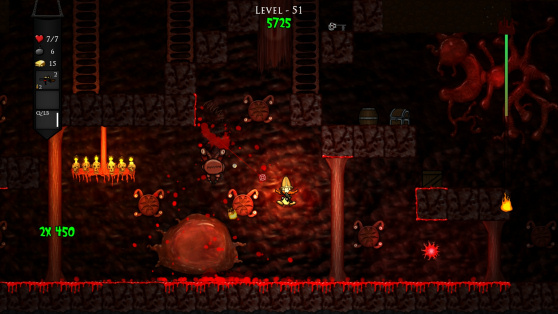 Above: Like in Super Meat Boy, blood sprays and coats every surface.

The challenge in 99 Levels is to obtain the right combination of upgrades, orbs, and weapons, which can make you unbeatable. But the longer you spend searching for them, the greater the chance angry ghosts will arrive and hunt you down. (Yep — it has ghosts, just like in Spelunky.)

“So it’s all about knowing if you have enough time to search and then get out quickly,” he said.

Bubble Bobble, on the other hand, doesn’t make me think of punishing games like those that Daugaard mentioned. But the classic arcade game shares a lot in common with Daugaard’s title, including the 100-level design. 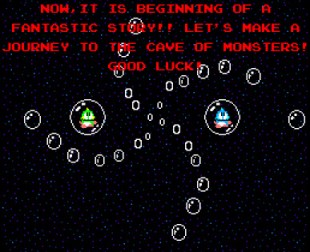 “It’s fast-paced at times, but it has a surprising level of tactics as well,” he said of Bubble Bobble. “Knowing how the monsters react and move, figuring out what the different items do, is key to beating a level.

“I think 99 has a lot of the same qualities. After playing the game for a while, you’ll start to recognize patterns in the levels and monsters. And at some point, you might know here to look for power-ups and when to use an umbrella or an elevator. Sometimes it’s a good idea to gamble on the elevator taking you back some levels — you might find just the power-up you needed.”

Some items may even make the game harder — although Daugaard confided that you can play as a dragon if you know where to find him (and you’re good enough).

But like Spelunky, you’re going to die — a lot. 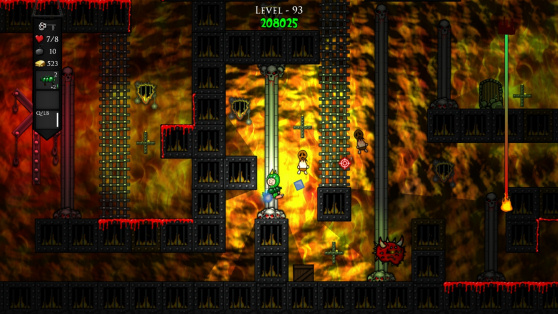 Above: One of the weirder-looking player characters, the Dragon.

“One of the biggest things that sets 99 Levels to Hell apart from Spelunky, aside from the gameplay, is the game’s story,” said Daugaard. “99 has a very detailed story told through poems that the player collects throughout the game. Once all pieces of the poem are collected, players will understand why our hero is fighting through the 99 levels to hell.”

Daugaard said players find these poems in secret rooms, where they also unlock new characters. These rooms — along with the shops, elevators, casinos, monsters, and power-ups — all spawn at random. And yes, I tried to kill the shop owner like in Spelunky. It didn’t work. But that’s a good thing. Daugaard isn’t copying Yu’s game here — the hunger for challenging, creative platformers is universal. This developer just loved the idea enough to stretch it out to 100 levels.

“For me, Spelunky started a new genre,” said Daugaard. “And I think there is room for more than a few games within that genre of action roguelikes.”