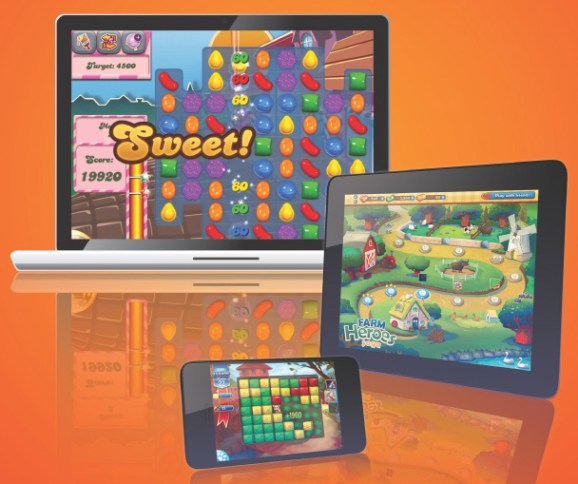 The game publisher has filed initial papers with the U.S. Securities and Exchange Commission for an IPO that would make it the biggest publicly held company in the multibillion dollar casual game industry. The London-based company (which has studios in San Francisco and around the world) plans to raise up to $500 million in its IPO, according to the filing.

King’s revenues have ballooned thanks to its casual-game megahit, Candy Crush Saga. The free-to-play release has players matching three like sugary treats to make them disappear and score points. While the game is free to play, King makes a hefty sum selling bonus items and extra lives as in-app microtransactions. The publisher uses this free-to-play model in all of its games, and approximately 4 percent of its players — roughly 12 million people — regularly purchase virtual items and power-ups in its games.

King’s filing already has one potential problem: Revenue declined from $621 million in the third quarter to $602 million in the fourth quarter. King attributed the decline to “a decrease in Candy Crush Saga gross bookings,” which was “mostly offset” by an increase in gross bookings across its other games. King knows the casual game audience can be fickle, so it’s trying to diversify its lineup beyond Candy Crush.

Candy Crush Saga debuted in summer 2012, and it is responsible for the bulk of the publisher’s growth: The game has 93 million daily players and generates 78 percent of the company’s revenue. That’s a far cry from King’s second-most-popular game, Pet Rescue Saga, which has 15 million daily users.

In 2013, Candy Crush Saga was the top-grossing app on both the iOS and Android markets. The company is also seeing growth from Farm Heroes Saga and Papa Pear Saga.

Farm Heroes Saga debuted in December and is already at No. 11 on the iOS top-grossing chart. That strong performance helped King overtake rival studio Supercell, which makes the popular Clash of Clans and Hay Day games, as the top publisher on Apple’s market. King is also faces competition in Asian markets like Japan from massively popular titles like Puzzle & Dragons from developer GungHo Online Entertainment.

In its list of risk factors, the publisher readily admits that “a small number of games currently generate a substantial majority of our revenue.” Investors remembering the burn of Zynga may hesitate before backing a casual gaming giant with just a handful of hits.

Thanks to Candy Crush Saga, King is now the most popular game maker on Facebook, ahead of Zynga. But unlike the FarmVille company, King makes most of its money in the mobile sector. While Facebook is stagnating as a gaming platform (which is causing many of Zynga’s problems), mobile is still growing in emerging and established markets.

King was most recently in the news for its attempts to lock down the trademarks on “Candy” and “Saga.” A number of developers attempt to boost their download numbers on the mobile app markets by copying the style and mechanics of other, more popular products. King wants legal protection against these types of games, known as “clones.”

But King isn’t just going after obvious ripoffs. The company has opposed trademark filings of legitimate games like The Banner Saga, which is an epic tactical role-playing game featuring Vikings and magic. King has no game like it on the market and is opposing it simply because it contains the word “Saga.” These actions have drawn the ire of gamers and the development community, as many believe King is throwing around its legal team to scare off competitors.

In its defense, King claimed that it must oppose all filings containing the words “Candy” and “Saga” (as they relate to gaming) to protect the strength of its own trademarks.

King intends to trade on the New York Stock Exchange under the ticker “KING.” JP Morgan, Credit Suisse, and Bank of America are among the lead underwriters for the IPO.