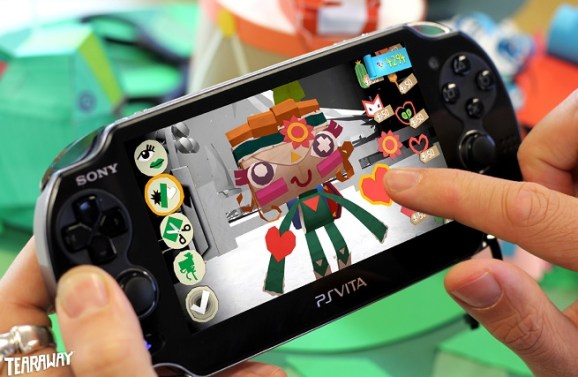 LittleBigPlanet developer Media Molecule is known for its quirky games, and Tearaway for the PlayStation Vita is one of the quirkiest. 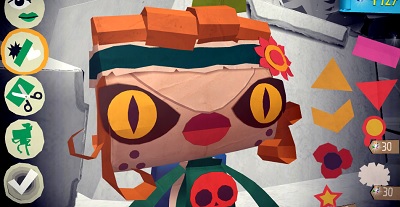 You play two characters in a 3D world made out of paper. It is an imaginative game where you can insert your own picture and add your own creations into the world. The character known as The Messenger has to navigate through the paper world to deliver a message to the player, known as The You.

The inspiration for Tearaway also comes from paper: co-creator Rex Crowle’s doodles around the London offices of Media Molecule. Crowle and his fellow creator, Christophe Villedieu, used their own sparks of creativity to push their game toward full customization. The player uses the Vita’s rear touch panel and the camera to add creations to the game and simulate papercraft inside the game.

We asked Crowle and Villedieu how they could come up with such impossibly creative ideas. Here’s an edited transcript of our interview.

GamesBeat: How did you come up with the idea for Tearaway?

Rex Crowle: I think the best fantasies come from some basis in fact. Movies like Labyrinth, the classic kid’s fantasy film that starts off in the kid’s bedroom, and then the fourth wall is torn away and they go off into the fantasy world. [The Chronicles of Narnia:] The Lion, the Witch, and the Wardrobe, all these kinds of stories. We wanted to get a similar kind of experience in a game.

But we couldn’t cast an actor to play the gamer. It has to be the gamer themselves. We used the Vita to essentially record the player and, by using the camera and the front and back touch, to get this feeling of a kind of intersection between a world inside of the Vita and then the player outside of the Vita. The way that the two are — information is passing between the two.

Tearaway is a bit of a love letter to the Vita. –Rex Crowle

I talked a bit about the way that we brought things out of the game by using printers. Anything you collect in the game, you can print out and make the papercraft of. Maybe other future fun silly things that could be done with repurposing or co-opting the sort of internet-of-things items that people have in their house, connecting them with the game system. Silly ideas like, when you get to the lava level in your game, it connects to your thermostat and turns up the heat in your house. [Laughs] 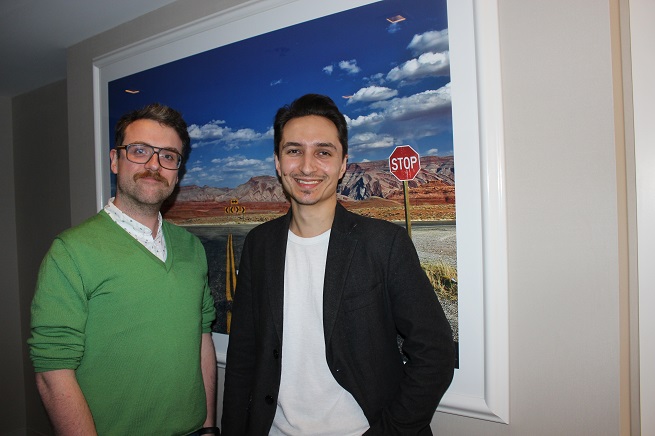 Above: Rex Crowle (left) and Christophe Villedieu, the creators of Tearaway.

GamesBeat: What sort of thoughts do you have on this whole area of gaming, whatever you call it? User-generated gaming?

Crowle: Previously, with LittleBigPlanet, we were very focused on UGC, mainly level creation and sharing that content. For Tearaway we took a slightly different approach. We wanted to level up a bit as far as making an adventure, a cohesive story arc, but then allowing the player to add to that story and customize bits and feel like elements from their world were going into the game world.

We’re using what I think of as instant personalization, treating the game a bit more like Instagram, where anyone using Instagram can take a beautiful photo and be happy with what they’ve done. The game would allow you to do a similar thing. You might meet a character who’s lost all their color, so you can instantly take a photo and they’re re-colored in the color of the thing you took a photo of. The same with character customization, being able to use paper and scissors to cut things out quickly and collage them on, rather than just unlocking costumes. Making sure that it felt really personal to each player. 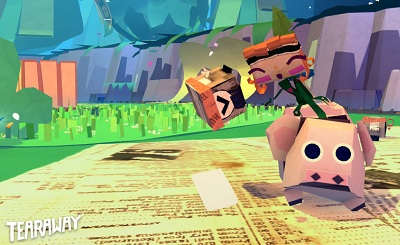 Above: The papercraft world of Tearaway.

GamesBeat: I always wonder how you get past the problem of professional content versus amateur content. Second Life, as a world, is built more by people who are very serious and professional about creation. They’re all artists or something like that.

Then you get to Minecraft, and it’s a much larger audience and also much more accessible. Something happened between those two that allowed for much greater success.

Crowle: The important thing is that, in a game that allows UGC, you need to have quite a strong visual style and metaphor behind it. The big difference with Second Life is that you would see all kinds of content in every style, but all of it would require, like you say, quite professional knowledge of 3D packages or whatever.

Villedieu: It’s not a very coherent whole. There are tons of different styles, and it looks a bit messy as a result.

GamesBeat: A city with no building codes. [Laughs]

Crowle: Where Minecraft obviously has a very strong aesthetic. You can tell instantly when you’re looking at it. LittleBigPlanet, we were using craft materials. In Tearaway, if you’re customizing things, you’re using a piece of paper and scissors. You’re dealing with the same limitations you would have if you had a piece of paper and scissors. The difference is, you get to then — if you’ve made a little crown, you get to put it on a squirrel. That squirrel is very happy and hops around and you feel — even though what you’ve done is quite simple, you’re adding to something that’s been professionally created. It’s kind of like a collaboration, really, between the game studio and the player.

Villedieu: We definitely pushed the customization to serve the story, to bring the influence of the gamer into how you can change the world. That’s the difference. There’s no “share” feature. It’s about how you want to customize your own experience. It’s not just to make something pretty. There’s a purpose and a design behind that. It makes more sense. It’s not completely free.

GamesBeat: I just got a look at Project Spark from Microsoft. It’s an interesting, except that I think the best platform for it is going to be a giant touchscreen TV. There aren’t too many of those in the world right now. Are you looking forward to more new ways to do these kinds of games?

Crowle: Yeah, it’s definitely interesting to see other games that have elements of things like what we’ve made. Seeing how other studios go in that direction.

GamesBeat: The touch input certainly seems like a way to break through. Maybe even the gesture controls that the VR guys are working on, like Sixense.

Crowle: We’re very interested in making things that feel very tactile. We put a huge amount of effort into making our papery world feel like you are touching it, that everything you touch reacts. You see it squashing and all that. That’s something you need to get in. If you’re doing gesture control, I don’t know — you need to feel in some way that you are touching that world, rather than just waving around something like a mouse cursor. 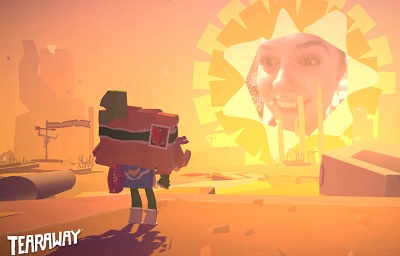 Above: You can put yourself into Tearaway.

GamesBeat: Do you feel like the Vita as a platform was ideal for this?

Crowle: Tearaway is a bit of a love letter to the Vita, really. We had the hardware in an early form, and straightaway we started dreaming of what we could do with it, starting with the back touch sensor. That’s what’s so unique in it. We came up with the idea of being able to touch the back and see your fingers appearing in the world, like you’ve actually reached in. And then we went on a kind of game jam process, to think about what else we could do.

It was all based on this one metaphor. If you think about it, you’re holding a world inside of this console. How else could you affect it? Making sure that all of those things — although they’re kind of wacky and experimental in some ways, they all make sense. You press the back and you see your fingers come through. You press the front and you can peel and unfold. Slapping the Vita makes things jump in the air. All that kind of natural reaction, rather than you’re getting some icons telling you to pull on some lever.

Villedieu: It has to feel like something intuitive. Before doing it, the cool thing is — we needed the player to guess what’s going to happen, and the answer has to be exactly what you expected. You want to see your finger move the light, everything like that. It has to be perfectly one-to-one to really — like what he was saying about gesture control. If there’s a lag on it, you break the illusion. That’s what took us a lot of time making this –creating that illusion, so you really believe you’re affecting the world. That was quite a challenge. 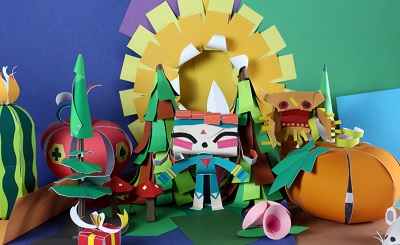 Crowle: Yeah, we were very happy about that.

Villedieu: We get love letters. [Laughs]

GamesBeat: Did anyone dwell on anything that caught your attention as far as what could have been better?

Crowle: Not particularly? I think some people felt like maybe there’s not as much challenge for a hardcore gamer as there could be. We wanted to give everyone playing it an experience where they’re being delighted by the world and their travels through it. They’re seeing and affecting the world, rather than just hitting walls all the time and needing to break down barriers. It feel like the world wants you to explore it. That was partly because we wanted it to have a wide audience, to be able to be played by very young children, but also their parents when they get intrigued. Or vice versa, which we’re hearing happens a lot.