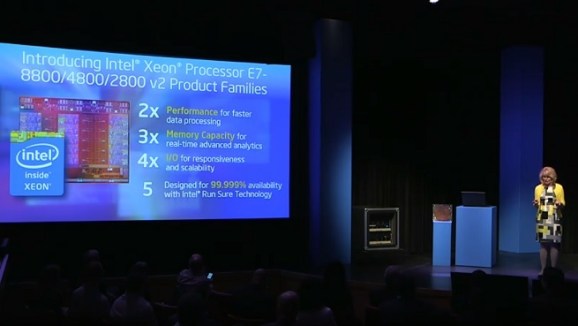 Intel announced its 15-core server chip family today to help big companies deal with big data requirements such as delivering real-time analytics to big tech customers. These kinds of machines will keep the business world running, from reducing cyberfraud in real time to running stock exchanges without a glitch. 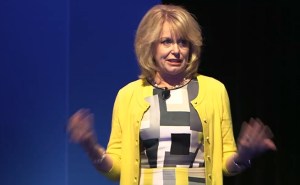 Above: Diane Bryant of Intel.

Intel said the new chips will give it performance leadership not only against rival Advanced Micro Devices in x86 chips but also against IBM’s Power series of server chips. Diane Bryant, the senior vice president at Intel and general manager of Intel’s data center group, said that the new chips have set 20 new world records in mission critical performance.

Instead of touting its gigahertz rating, Intel is heralding the business insights that the new server chips will enable, such as real-time intelligence. As the world becomes inundated in data from the so-called Internet of things, or web-enabled sensors on just about everything, enterprises are creating tools so that their customers can figure out what is going on with their businesses in real time, Bryant said. Computing infrastructure has to be set up to handle that flood of real-time data, Bryant said.

Big data market is expected to grow 27 percent a year to reach $32.4 billion by 2017, according to market researcher IDC.

Companies such as eBay, Cisco, VelociData, HP, and the London Stock Exchange joined Bryant on stage to sing the praises of the new chips and how they can help companies transform their businesses.

Dan Morales, the vice president of enabling products at eBay (which handles 50 petabytes of data for more than 100 million users), said onstage at Intel’s press conference that his company is producing 50 percent to 100 percent improvements in data processing times as it tests the new chips from Intel inside Cisco servers and SAP software. The machines are also standards-based and so they’re easy to deploy.

“We want to go from months of rolling out platforms to hours,” Morales said. “We are literally there. We are excited to see that.”

“We are very excited about the E7,” said Moiz Kohari, the vice president at the London Stock Exchange. “The access times matter heavily to us. We run multiple stock exchanges and clearing and settlement services on the backend.”

Speaking at Intel’s press conference, Kohari said that the exchange’s computing needs have a lot of variety, with dense platforms, lots of memory needs, and high levels of availability. The exchange can’t tolerate “latency jitter,” or unreliable server uptime.

“We don’t look at a database or processor,” Kohari said. “We have to look at the whole system.”

BP needs the real-time monitoring data from an army of sensors. When these rigs go down, the cost can be a million dollars an hour.

Rival RISC computers hold just 6 percent unit share for 4-sockets and above in the server chip market, but those units are 52 percent of revenue in that category. Intel’s new chip will attack that category, Bryant said.

Twenty-one computer makers are shipping more than 40 systems with the Intel chips today.