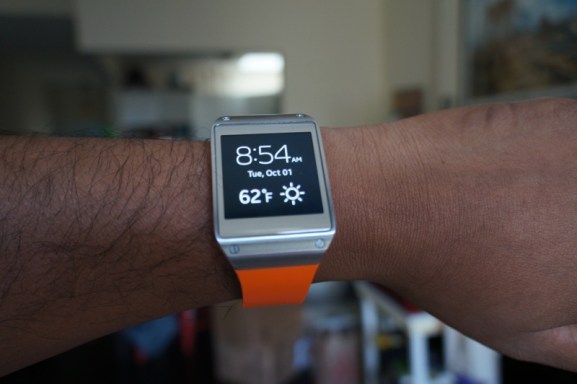 There wasn’t much love for Samsung’s Galaxy Gear smartwatch when it launched just a few months ago — it was bulky, expensive, and simply didn’t do much. Now there’s word that Samsung is gearing up to debut a new model alongside its Galaxy S5 reveal next week.

While that alone would be surprising, USA Today is reporting that Samsung is also aiming to make a big shift with the new Galaxy Gear by dumping Android for its homegrown, Linux-based Tizen operating system.

While this plan may sound farfetched, I wouldn’t be surprised if Samsung had a backup plan in case the Gear flopped badly (and boy, did it). On the other hand, Android was far from the biggest problem with the original Gear.

By shifting to Tizen, Samsung would have far more control over the Galaxy Gear’s software, and it would remove yet another point of reliance on Google’s Android. Tizen — a project driven by the Linux Foundation and developed by Intel, Samsung, and others — has been demoed by Samsung but hasn’t yet made its way to any retail phone. Still, it wouldn’t be that much of a shift to bring the OS to another low-powered, battery-starved device like the Galaxy Gear.

One of the big problems with the original Galaxy Gear was its limited compatibility with a few of Samsung’s Android devices. It was only compatible with the Galaxy Note 3 when it launched, and it took a while for Samsung to add compatibility for the Galaxy S4 and other recent devices. Moving to Tizen could allow Samsung to make the Gear more widely compatible with other smartphones (though it would undoubtedly take plenty of engineering effort).