Strider is insane … in a genius way.

It’s one of those games that made people drop their jaws or scratch their heads back in the era of quarters, credits, and cartridges. Fans and detractors alike could agree, however, that the old arcade platformer-turned-Sega Genesis gem had character. Its unique and fascinating soul has influenced a slew of action titles over the last couple of decades.

Capcom’s multiplatform modern-day reboot of the quirky franchise, coming out Feb. 18 on multiple platforms (PlayStation 4 reviewed here), doesn’t live up to that legacy. And here’s why.

The devs respect the source material

Double Helix Games developed the new Strider, and the studio’s unabashed love for the series shines through in many ways. The designers’ fandom immediately hits you when controlling superninja protagonist Hiryu. He runs, jumps, slides, and slashes just like he did in his previous adventures. And the world he dashes through features the dystopic Soviet-cityscape trappings you’d expect. Many of the character designs take inspiration from their pixelated ancestors, too. 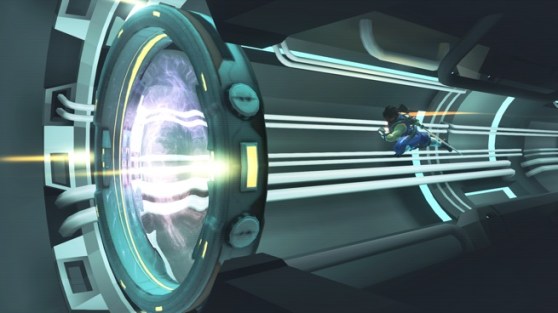 Above: The developers give plenty of nods to earlier Strider games.

I particularly enjoy the subtler homages. One of the levels features a network of fast-travel tubes that shoot you around — a clear nod to the more-obscure, different-from-the-arcade Nintendo Entertainment System Strider title. Even one of the music tracks is a remix of the first level theme from the 8-bit game, which is pretty cool. Some of the other songs are new takes on classic tunes from the arcade/Genesis release, so diehards should take note.

Strider runs at a slash-and-soar-friendly 60 frames per second. All the action moves at a quick pace. While it isn’t a graphical tour de force, Double Helix used some clever visual techniques to enhance the aesthetics. Every now and then, elements in the backdrop would seamlessly transition into the foreground — like flying drones or robots on an assembly line. Once they reached the same plane as my character, they’d become fodder for my plasma blade. 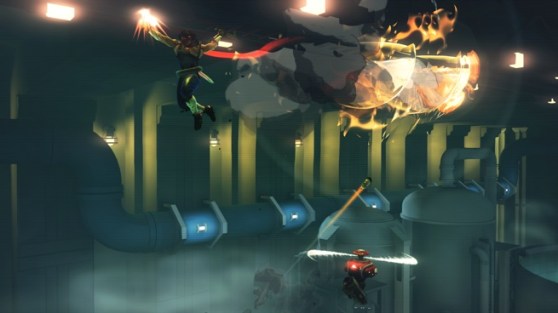 Above: Smoke effects pop nicely against the background.

While the game employs a 3D engine, some of the smoke effects evoke a cell-shaded 2D style, resulting in an appealing hybridized look.

The new Strider is a “Metroidvania” platformer, meaning it has an open level layout with certain areas you can only access via specific skills that you learn later on. As you progress through the campaign, you enhance your main plasma blade, acquire different kunai (throwing knives), and gain energy-sapping secondary attacks. Some of the abilities hark back to the original game, such as the panther strike and bipedal support bots. 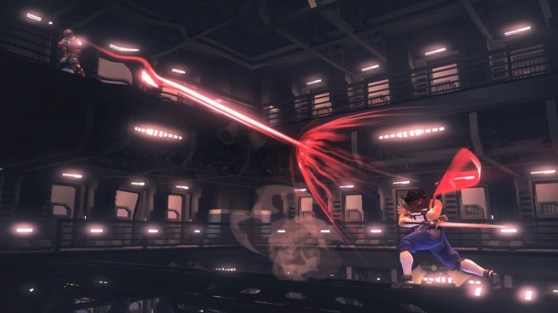 Above: Skills include the ability to deflect enemy shots.

All of these capabilities entice you to go back to previously inaccessible areas so you can boost Hiryu with health and energy upgrades.

No story behind the slashing

You’d think that a game featuring such an eclectic setting and equally eccentric characters would warrant some exposition. But sadly, that’s not the case. Sure, the original game also skimped on the storytelling, but it was an arcade release at its core with the sole purpose of emptying the pockets of its challengers. 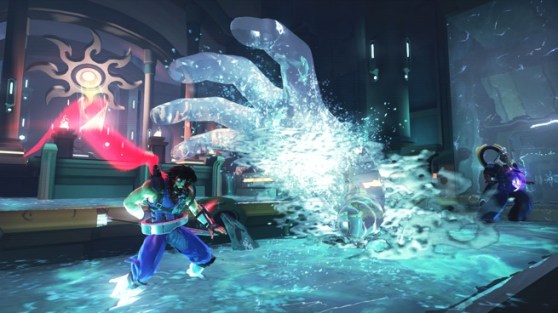 Above: This water-shaping shaman is fighting you … just because.

The new title’s “narrative” consists of some shallow cutscenes sprinkled with middle-of-the-road voice acting and lifeless character models that don’t even move their mouths. These little moments are underwhelming, and they failed to enrich the intriguing Kazakh City setting.

Things just happen with little to no reason.

The music is just plain boring

One of the most memorable parts of Strider prime was its schizophrenic yet hypnotic music. Echoing its Eastern European inspiration, the soundtrack focused on synthesized organs and bone-chilling xylophones pumping out notes to match the onscreen chaos. The audio accentuated the feverish action. 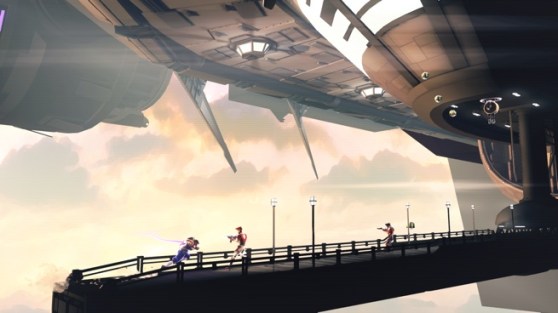 Double Helix’s tribute falls short in this department. Hard. The background songs are generic and lack that distinctive quality that oozed out of the first game’s music. The only track that wormed into my brain was the aforementioned remix of the NES Strider’s first-level theme, and that’s because of the catchy 25-year-old melody.

The new-school tunes just sound flat, and they easily disappear into the background once things get intense.

Every Strider game has had one consistent quality: total lunacy. I’ve focused on the arcade/Genesis original because it serves as the main inspiration for the remake. But the aforementioned NES adventure and the under-the-radar Strider 2 that also hit arcades (and PlayStation consoles) had plenty of bizarre charm.

This new game feels like a by-the-numbers project that checks off the typical boxes. After all, it’s another downloadable Metroidvania experience with a low price. 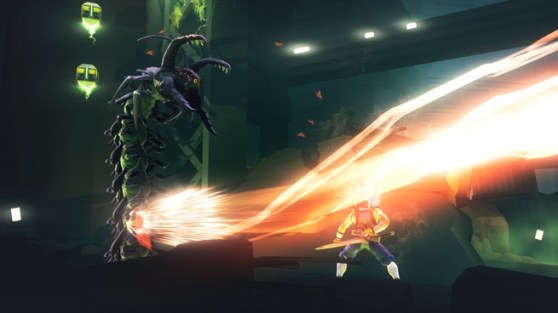 Above: Not crazy enough.

But here’s the thing. Strider is the outcast that never fit in a standard mold. It somersaults over structure and organization. The franchise has always been a designer’s impulsive fever dream, a messy mishmash of whatever that, somehow, magically works.

The reboot never takes risks, and everything — from the music to the muted colors — lacks personality.

I didn’t feel like I was experiencing a madman’s vision when playing the 2014 Strider. It was more like a tempered salute. Yeah, I ran into the aforementioned mecha gorilla again. That was OK. And the final boss was kind of cooky, I guess. 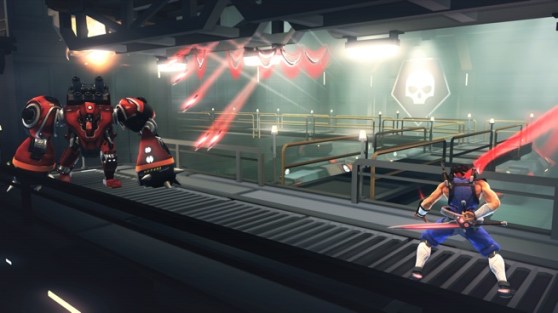 Above: This isn’t the Strider I was hoping for.

But I never experienced that what-the-hell joy. I didn’t fight a hammer-and-sickle wielding millipede made up of parliamentary politicians. Nor did I slice through racoon-hat-wearing robots doing a kozachok dance. The new game didn’t bring anything new, instead opting to jam Hiryu into a formulaic experience that looks good on a whiteboard.

Strider releases on Feb. 18, 2014 for the Xbox One, PlayStation 4, Xbox 360, PlayStation 3, and PC. The publisher provided GamesBeat with a PlayStation 4 code of the game for the purpose of this review.