In real life, the Industrial Revolution gave birth to important inventions such as the steam engine and telegraph. In Neo-Victorian London, it gave people an army of patrolling airships and a gun that fires electric bolts of energy.

I think I would’ve preferred the latter.

Elaborate gadgets and weapons are the norm in The Order: 1886 (out later this year exclusively on PlayStation 4). As the name suggests, the game takes place in 1886, an important year for mankind’s thousand year-old fight against mysterious creatures called half-breeds. Defending the world from these foul beasts is the Order, a group of nigh-immortal heroes partly inspired by Arthurian legend. You play as the veteran Galahad, who leads his small squad of knights — Lafayette, Percival, and Lady Igraine — into the filthy depths of London to try to finish the war once and for all.

I saw a short but impressive-looking slice of gameplay of developer Ready at Dawn’s newest title at a recent preview event. Since it was hands-off, creative director Ru Weerasuriya guided us through the demo, which showed bits of exploration, combat, and cutscenes all within a span of just a few minutes. It was a sampler platter for the kind of seamless cinematic experience the developers are aiming for with the full game. 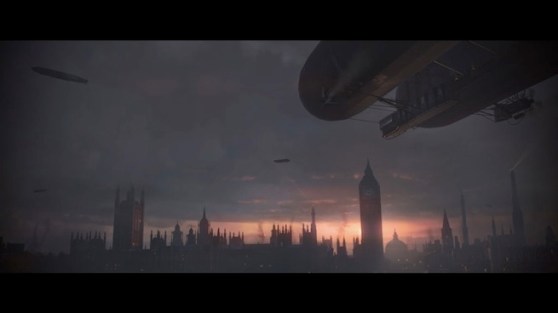 Above: A fleet of airships patrols Neo-Victorian London at all times.

Breaking down the wall between cutscenes and gameplay

While cutscenes are useful for moving a story along, they can sometimes break the single-player experience when they take control away from you or if they look drastically different from what you’re playing. With the PS4, Ready at Dawn believes it can finally get rid of that disconnection. The Order: 1886 uses the same 3D models for both cutscenes and gameplay.

I couldn’t find any major differences between the two — the only things that changed were the camera angles. All of it looked gorgeous, especially with the detailed facial expressions and the way the knights’ uniforms swayed as they moved.

The developers also want to make sure that the cutscenes aren’t just passive experiences. This was clear at the beginning of the demo, when Galahad pulled out a pair of mechanical binoculars and the player took control of it and scanned the district of Whitechapel for a hospital. After a few more seconds of conversation between Galahad and Lafayette passed, the player was given another job: send a message in Morse code by using the touchpad on the DualShock 4. Though all of them were simple tasks, the goal wasn’t to challenge you; it’s to keep you engaged.

“We want to keep the player involved,” Weerasuriya said. “Even in the moments where, normally in games, you’d just [get the story beat and then move on to] play. We wanted to make sure that all those things had as much interactivity that we could give to the player.”

Above: Whitechapel isn’t the most healthy-looking part of town.

The two sides of combat

Combat is one area where The Order: 1886 doesn’t seem to change too much from other third-person shooters: It also places an emphasis on taking cover behind walls or objects when you’re in the middle of a fight. Unlike last year’s trailer from the Electronic Entertainment Expo (E3), however, the knights didn’t shoot at any monsters during the demo. Instead, they faced members of the Rebellion, a group of humans that rose up against Britain’s oppressive regime. They don’t like the Order at all, and they think the organization exists only to protect the wealthy.

Melee combat looked a little more interesting. After the shootout, Galahad fell through the wooden floor of a building to fight one of the rebels below. The moment turned into a variation of the quick-time event, where you have to sync Galahad’s movements with the button prompts that appear on-screen. But here, missing a button doesn’t automatically mean it’s game over. Failure just leads to different branches of combat with new moves and situations, so you can win (and lose) the same fight in multiple ways.

Once Galahad pinned the enemy to the floor, the action slowed down, giving the player time to choose between a piece of wood or a large knife for the killing blow. He chose the knife, and Galahad proceeded to brutally stab the rebel’s throat and chest.

If Weerasuriya didn’t narrate the demo, I would’ve had a hard time noticing the features that make The Order: 1886 stand out from other shooters. Aside from the flashy graphics, the tweaks that Ready at Dawn are making to the genre — seamless transitions between cutscenes and gameplay, tight pacing, and a complex melee system — are subtle. They sound good on paper, but it’s hard to say how much of a difference they’ll actually make without playing the game myself.