One Piece is a very successful manga and anime franchise, with fans around the world. The manga series has been around since 1997, and the anime has run over 600 episodes. One Piece: Romance Dawn is the 34th of 37 licensed games in the franchise (many were only sold in Japan), since it released exclusively in Japan at the end of 2012. A year later, it was brought to Europe, and now it has finally come to the US.

The One Piece story, based on a young man determined to become the Pirate King, has all the elements needed to make a fantastic role-playing game: a setting ideal for exploration, likable characters, an epic quest, and plenty of fighting. Unfortunately, One Piece: Romance Dawn, published by Namco Bandai for the Nintendo 3DS, is not a fantastic RPG. It’s not even close, suffering from a lack of inspiration and counter-intuitive design decisions. While developer Three Rings, Inc. covers all the bases, it does so with the bare minimum requirements, turning what should be an exciting pirate adventure into a dreadful waste of time.

The combat and character-building mechanics are the only aspect of the entire experience that help One Piece: Romance Dawn rise above mediocrity.

Combat is turn-based, but you are free to move each of your three characters to any part of the battlefield before you begin your attack combo. Just watch out for penalties; concentric yellow and red circles mark boundaries for each move, and if you cross them, your character will suffer consequences on the next turn. Battles start off simple, but a few hours into the game, they become more interesting as you unlock new skills and face larger groups of foes. Fights can definitely be fun, especially the challenging boss encounters.

Besides the combat, Romance Dawn also possesses an intricate system for upgrading members of your crew. Enough stats are here to satisfy any serious RPG player: HP, TP, AP, Power, Speed, Energy, Guard, Technique, Luck, and a trio of elemental resistances. Accessories to modify the above stats can be dropped by enemies or purchased in a shop. You can level up character-specific skills by spending SP (yes, another acronym). Finally, a crafting system adds even more complexity. None of this is groundbreaking stuff, but it brings depth; those who want to get the most out of their team must think carefully about how to allot their resources.

Together, these gameplay systems make One Piece: Romance Dawn appealing to those who enjoy approaching RPGs strategically. They were definitely my favorite part of the game, and I’m sure I would have enjoyed them more had they been properly explained.

The One Piece franchise already has fans all over the world, especially in Japan. That group of fans is much, much more likely to enjoy this game than everyone else, if only because it allows them to relive moments from the anime series. It features several important scenes from the first story arc, a potentially redeeming quality for those who want a chance to take control of the Straw Hat pirates and clobber bad guys from the TV show. I was indifferent, having no previous experience with the franchise. Still, even those who love the One Piece story might hate how poorly this game presents it. 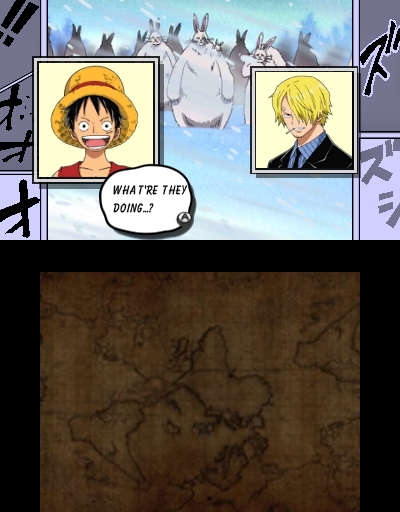 Above: These talking head cutscenes are terrible. They're often very long, too.

Romance Dawn has an inner conflict — it’s as if the game’s designers were determined to negate every good part of it by crippling the way they present it. Take the beloved story, which is the reason for this title’s existence. It’s butchered by a terrible cutscene format that imposes squares containing the faces of those speaking over generic backdrops. The character faces change their expressions every once in a while and vibrate to show who is speaking, and that’s the only animation involved. This method fails on three fronts: It’s dull, it’s confusing, and it fails to convey actions well. That’s a big problem for a story as heavy on action as One Piece. Occasionally, important scenes have short, fully animated clips instead of this terrible system. They look great, and they’re exciting, and I have no idea why the developers didn’t use them throughout. To me, it was a mistake.

Unfortunately, the situation is the same when it comes to Romance Dawn’s environments. One of the One Piece anime’s greatest strengths is its richly drawn and animated settings. The generic art style and sparsely populated areas of Romance Dawn have no inspiration. Instead of rich, hand drawn-style artwork, we’re stuck with generic polygon graphics that look like an average PlayStation 2 game (or worse). It has are plenty of locales with many paths to explore, but exploring this world is simply not fun.

Romance Dawn was originally for the PlayStation Portable. It’s obvious that when the developers brought it to the 3DS, they did so without any respect for the system’s features. It’s a real shame, too. Without touchscreen controls, 3D visuals, or Streetpass functions, this game is even inferior to other RPGs that take advantage of all the handheld’s functions (like the recently released Bravely Default).

Because of the complexity of Romance Dawn’s combat and character development, I was excited to learn all about them so I could start playing strategically. This game makes information to help you do this hard to find. Help messages appear on loading screens, but they’re not frequent or in-depth enough to be useful. A few hours into the game, I searched the help menu and found several entries that I had never seen before. Still, it doesn’t explain essential topics such as the effects of each statistic or the way accessories work. The failure to provide adequate assistance for such a complicated game turns what should be a satisfying experience into a frustrating one.

Repetition can be good. In Romance Dawn, it’s bad. The same pattern repeats over and over: land on an island, search for items in chests left out in plain sight, fight group after group of enemies, and finally challenge the boss. Yes, I’ll grant that many RPGs follow a similar pattern. But the difference is that One Piece does very little to mix it up or keep it interesting. Enemies are basic and completely devoid of character, and there are too few types of them. While the combat system works well, the constant unimaginative conflicts become total drudgery. I often found myself wanting to run straight to the boss, just to get it over with.

One Piece: Romance Dawn is easy to summarize: It just isn’t any fun. I have no doubt that it could have been fun. As an outsider to the series, I was excited to see what it was all about. I had grand ideas of exploring the seas, fighting rival pirates, and experiencing a great story. All of those elements are here (kind of), but it’s surprising how lame they become thanks to terrible design. Ultimately, this game isn’t worth the time of anyone but the most devoted and patient fans of the series. The 3DS has several RPGs that are far more entertaining.

One Piece: Romance Dawn was released in North America for the Nintendo 3DS on Feb. 11, 2014. The publisher provided GamesBeat with a review copy of the game.