Steve Perlman intends to redefine the capabilities of wireless technology.

On Wednesday, the serial Silicon Valley entrepreneur behind technologies like OnLive and WebTV introduced his new wireless innovation, pCell. Perlman promises its super-fast, reliable connections will support an unlimited number of devices sharing the same signal.

Artemis Networks, Perlman’s self-funded wireless startup, aims to make cell towers a thing of the past. Instead, devices can connect to little base stations called pWaves, which Artemis and its partners plan to begin installing in San Francisco and New York later this year.

VentureBeat caught up with Perlman at Columbia University to talk about the technology, its potential applications, the impending rollout, his relationship with existing wireless carriers, and more.

VentureBeat: How would you explain pCell’s value to consumers?

Steve Perlman: The messaging is that you have huge variability in your mobile service: Sometimes it works great, sometimes it doesn’t work at all, and everything in-between. What [pCell] does is it gives you consistent service. You could call it something like mobile fiber, because fiber is something that has effectively unlimited capacity, and it also is something that has very consistent throughput. Fiber has enough capacity that if a lot of people pile on to it, there’s a good chance you’re still going to have pretty good throughput. And fiber has very low latency, and we have lower latency than your normal mobile system. We can achieve an average of about 5 milliseconds of latency with LTE, and if we go pCell native, we can achieve sub-millisecond latency.

VentureBeat: How much does software drive pCell?

Perlman: Our team member, Mario di Dio, has made huge strides in software-defined radio. We don’t have a baseband chip. We’re clocking that out in software. We have come up with new computational mathematical techniques. Software-defined radio has been a hobby until now. With the introduction of pCell, it’s a commercial proposition. We just entered an entirely new field.

VentureBeat: How does pCell differ from MIMO technology?

Perlman: MIMO is a term used to describe many, many different systems. What is really means is multiple input and multiple output, which means there’s many antennae going into the channel and many antennae going out of the channel. MIMO usually refers to the kind of MIMO that’s used in LTE. In that case, you have multiple antennae at a base station that then are communicating to one or more antennae in a user device — it’s usually a multiple of 2-to-2 or 4-to-4.

The trouble with MIMO is because the antennae on both sides are very close to each other, there’s no angular diversity. So what happens is, if you have a line-of-sight path right to something, and then there is no multipath, there’s no bouncing off of walls — take outer space — MIMO doesn’t work at all.

MIMO begins to work when you’ve got a bunch of things in the way. But wait a minute: I’ve got a bunch of things in the way, so that means I’m relying on secondary paths, which by definition are lower power, less efficient. MIMO works in large degree on the fringes of capacity. For example, in a cellular system, you can only really get MIMO near the center of the cell — on the cell edge, you can’t get MIMO at all. You need to be really close, and have a good quality signal. With a pCell system, we achieve capacity wherever we are. That’s one way it’s different than MIMO.

Now, there are some people over the years that have talked about different kinds of MIMO — massive MIMO with lots of antennae at the base station, and then individual or a few antennae in the devices. You have angular diversity amongst the devices, but all of the antennae are in one core place. You run into an issue with doppler there. Doppler normally relates to sound waves — motion relative to the source of sound waves actually stretches out or compresses — but the same thing happens to radio waves when a device is in motion. With a MIMO system, when you have the antennae in a centralized place, you’re always going to be faced with that challenge of doppler. But with a pCell system, we don’t have that, and it’s for a really cool reason.

VentureBeat: Why is that?

Perlman: If you are at the train station and the train goes by, you’ll hear that change in pitch. Suppose you’re a quarter-mile away from the train station: the pitch doesn’t change, not noticeably. Why’s that? From there, angularly, it’s actually moving a very little amount. So when we get feedback from the pWaves, which is what we call the distributed antennae, when they listen to what is normally uplinked from the LTE phones, which is what we use in order to figure out where to place these cells, they report on whether or not they’re experiencing high doppler. 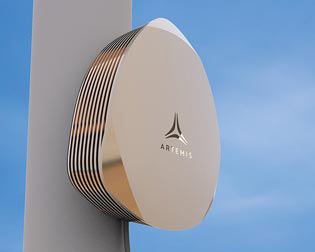 Suppose we eventually deploy 10,000 radios in New York. If you really were to go to say, theoretically, every one of those radios could interfere with another radio, then you’ve got to do a 10,000 by 10,000 matrix calculation, which is intractable to do in real time. We made the observation that a guy who is in downtown is not going to have a phone that is possibly going to be received [uptown] in Morningside Heights. So when the pWaves receive the uplink signal from the antennae, only the ones that are within reach of that antenna actually go and transmit back to that phone.

Let’s say I have two phones. This one transmits and he’s seen by six pWaves, this other one transmits and he’s seen by six pWaves, and three of the pWaves are in common. In a MIMO system, there’s a one-to-one relationship between the transmitting antennae and the receiving antennae. Not so with pCell. In this case, there’s a contribution of those common antennae for both of those phones, but not a contribution from the antennae that don’t work with those phones. It’s an entirely new way of doing radio. It’s a user-centric system, as a opposed to a base station-centric system. In doing so, we solve the computational complexity problem: Now the matrix we need to calculate is only, in this case, a 6-by-6 matrix for each of those phones. And then there’s some matrix combination, but that’s largely an addition problem. Before it was an exponential problem — you’d have a 12-by-12 matrix that you’d have to calculate, which is vastly more complex than a 6-by-6 matrix. We never really get too much more than 30-by-30 in terms of complexity, and we can handle as much as 100-by-100 given the optimizations that we’ve done.