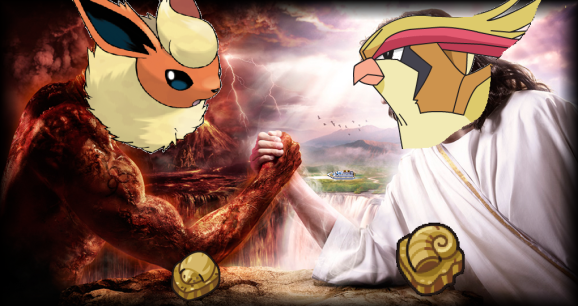 The two prophets of the Twitch Plays Pokémon religions.

Estimates suggest the world has around 4,200 religions. Thanks to Pokémon, that number is now more like 4,202.

Over the last week, more than 500,000 gamers have logged into gameplay livestreaming service Twitch to play Pokémon Red for the original Game Boy. What’s strange about this is that they aren’t all playing their own game — instead, 60,000 to 120,000 different people are all collectively entering commands into one instance of the classic role-playing title. Viewers can enter button presses (up, down, left, right, B, A, or start) into the chat window of the broadcast page, and an anonymous programmer has set it up so those commands funnel into the game. This has led to some random moments and, insanely, the creation of new faiths.

Twitch Plays Pokémon went live last week, and the collective is slowly making progress — but that’s not all they’re making. Fans have made art, epic trailers, and parody songs about the “mythology” of Twitch Plays Pokémon. Most of this branches off from a pair of religions that viewers came up with while watching the game. Battling sects of believers now have their own gods, prophets, and fallen angels — all of which are Pokémon characters or items.

Twitch viewers devised the religions based on the emergent and unpredictable events of Twitch Plays Pokémon. These somewhat facetious belief systems came into creation during crucial points in the Pokémon story. It really all got started on day two of the stream (which is now nearing its ninth day of existence), when players had to choose between two fossils. This decision divided the Twitch community with what seemed like half wanting to select the Helix Fossil with the other half wanting to choose the Dome Fossil. These items are important because they later turn into rare pocket monsters — but the Twitch viewers ended up ascribing a lot more meaning to them than that.

The Helix Fossil currently sits in the Twitch Plays Pokémon’s character’s inventory. The thousands of chatters controlling the game often go into the menu and click on item, which does nothing. They’ve done this so much that the community figured that the Helix Fossil is a god that is watching the collective as they progress. They also figured that must make the Dome fossil the devil.

This all happened at around the same time that the person responsible for Twitch Plays Pokémon introduced a new system where players can vote for either “Anarchy” or “Democracy.” If more people vote for anarchy, it means that the game just puts in every command. If democracy is winning, the game instead takes a poll of what the community would like to do.

Naturally, the religions adopted these ideologies. Helix represents anarchy, while Dome is the democracy that wants to finish the game. Like any good cult, the devout are producing plenty of propaganda.

It’s all very bizarre. Check out the gallery of some of religious scriptures below: 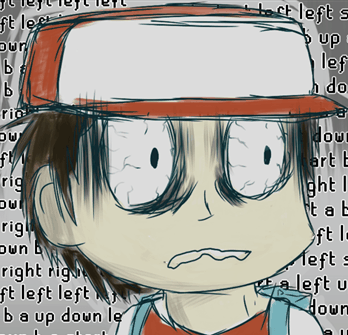 Above: Ash doesn't understand why it feels like thousands of people are controlling him from inside his head.

Masterjun3, another YouTube user, created a video that captures some of the biggest moments in the history of Twitch Plays Pokémon. That includes events like cutting down a tree, defeating gym leader Misty, and the great schism of Eevee and Lapras. All of this is set to some pretty epic music.

Finally, Twitch broadcaster Darren Geers streamed himself painting an homage to the collective. He posted a time-lapse video of the illustration that he made in Photoshop: