Developer Level-5 struck hammer to gold with its idea for a “comedy” role-playing game where players are the humble merchant, not the world-saving hero. But any good blacksmith knows that sloppy work can ruin even the most promising weapon.

That’s the fate of Weapon Shop de Omasse (out today on the 3DS eShop), which puts players in the role of a blacksmith’s apprentice — all to a sitcom laugh-track. Yuhan, training under his master Oyaji, forges and rents weapons to eager heroes who engage in tongue-in-cheek banter about the predictable nature of RPGs. They’re fully aware that they’re characters or, worse, nameless NPCs in a video game.

Even so, the lives of the heroes you send armed into battle — ultimately against the returning Evil Lord — prove much more interesting than the daily toil of a young blacksmith. 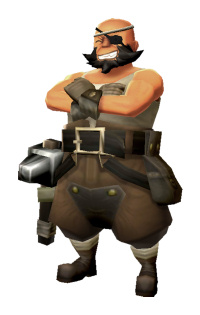 Above: Oyaji, the master blacksmith.

Weapon Shop de Omasse may be a digital title, but Level-5 didn’t skimp on the quality of the graphics. They’re lush and colorful, and the characters have equally bold personalities to match.

As he masters his trade, Yuhan — a freckled kid-apprentice with blue hair — meets characters like a lovestruck lady pirate, a down-on-his-luck samurai, a butt-kicking old grandma, and a smug, over-the-top Frenchman who can hardly resist striking a pose and repeating his own self-indulgent introduction every time he walks into the shop.

These characters are highly expressive and have their own theme music to boot. You won’t get bored hearing about their latest mission and antics, either in person or by eavesdropping with the Grindcast, a device built into every weapon that monitors quests in real time. This works like a scrolling Twitter feed, complete with hashtags, LOLs, and plenty of jabs at the RPG genre.

Sadly, that’s probably the only joy you’ll get out of this 12-hour-plus game, which is about 11 hours too long.

Not much ‘RPG’ about it

Weapon Shop de Omasse may make fun of RPGs, but it’s not much of one. Players collect and purchase materials to forge different weapons — swords, axes, clubs, spears, blades, daggers, and so on — but while they all look distinct and have different properties, the process of creating them is always the same. You strike a hot chunk of metal to the beat of a rhythm, chiseling out the weapon’s shape and design.

These rhythm minigames are incredibly basic: Only a handful of songs serve as shuffled background music, and the challenge never increases — only the tempo. You listen to the music pattern and then play it back by tapping the 3DS touchscreen on different parts of the metal. 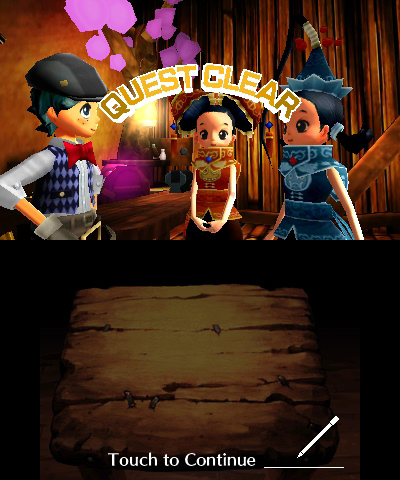 Above: Yuhan talking with the twin sisters.

Even this simple activity is misleading: You aren’t actually penalized for missing a note. The best strategy seems to be to wait until the heat drops in the red (“perfect temperature”) zone and then hammer out combos for maximum points. You can even skip whole lines of notes to raise the temperature up or cool it down as needed. Finishing quickly isn’t necessarily advantageous, either. Sometimes dragging out the process can raise the weapon’s three color-coded stats — slash, pierce, and blunt — more than if you rushed to completion.

Now imagine doing the same thing over and over again for 12 hours. That’s the extent of Weapon Shop de Omasse’s ingenuity.

Crafting weapons is tiresome, and so is filling the time between jobs. You’ll want to produce as many weapons as possible to gain more experience, which means fulfilling requests on the spot — matching an NPC’s level and specialty to a weapon of his preference and a suitable quest — as well as fashioning optimal weapons from scratch for more important, recurring customers. Other times, you’ll make new weapons just to keep yourself busy.

You either have too much time on your hands or too little: Weapon Shop de Omasse has a nasty habit of interrupting whatever you’re doing (unless you’re in the middle of forging or polishing a weapon) to accommodate a customer. The day’s schedule runs on an in-game clock, so you’ll often have to hurry to complete orders. When these interruptions occur, you might forget what you were going to do because you were a second too slow to do it. Occasionally, you’ll loan a weapon to an NPC that you actually made for a character who then walks through the door immediately after. 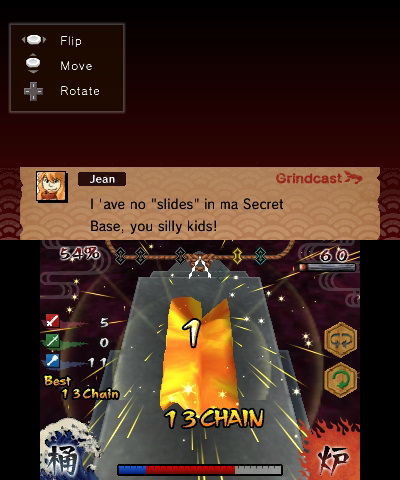 Above: Forge weapons to the rhythm.

If a character loses or breaks a weapon during battle — because your workmanship was too poor — then you don’t make any money from the rental, and you’ll have to repeat the quest. These failures detract from your overall experience at the end of the day, all of which can hold you back. Level 8 characters will show up when you haven’t even unlocked the materials to make that advanced of weapons, which usually guarantees some failures and even more quests to redo.

For a comedy RPG, Weapon Shop de Omasse isn’t all that funny — at least not after the 10th joke about disposable NPCs. It can be witty, but most of the time, you won’t even get to read all that the Grindcast has to offer (it has a ton of text) because you’ll be struggling to keep up with orders or too absorbed in menial tasks to pay attention anyway. The only thing worse is the sitcom track of laughter, clapping, and booing that makes the bad jokes more intolerable.

Weapon Shop de Omasse is an infuriating, boring game. Only RPG enthusiasts who snigger at jokes about stereotypical Evil Lords, grinding against rats, and “Tutorial Caves” will care to play it — and even then, they would be wise to reconsider. If developer Level-5 set out to make a game that captured the spirit of blacksmithing, it certainly succeeded: This is nothing more than an exercise in monotony and routine.

Weapon Shop de Omasse was released for the 3DS on Feb. 20, 2014. The publisher provided GamesBeat with a digital copy of the game for the purpose of this review.