For her first company, Danae Ringelmann set off on a mission to “democratize finance.”

No pressure or anything.

Astonishingly, Ringelmann is well on her way to achieving that goal as one of the most influential members of the crowdfunding movement. The company she helped start with two close friends, Slava Rubin and Eric Schell, has helped thousands of entrepreneurs raise capital outside of the traditional banks and venture firms. That upstart is the memorably named Indiegogo, and it has grown to become the chief rival to New York-based crowdfunding behemoth Kickstarter.

The beginning of 2014 has been unseasonably busy for Ringelmann. I spotted the entrepreneur at a slew of events, including a meet-and-greet with House of Representatives Minority Leader Nancy Pelosi and at the Women 2.0 conference in San Francisco, where she delivered a keynote to a packed house. But Ringelmann agreed to set aside time for a call at the end of the day to discuss her favorite topics: crowdfunding and change-making.

In a phone interview, Ringelmann described how she built a gatekeeper-free way for any small business to access capital and her tips for retaining a healthy workplace culture. Here’s an excerpt from that conversation, edited for brevity:

VentureBeat: What’s the core mission for Indiegogo? Has it changed over the years?

Danae Ringelmann: The founders are all passionate about ideas. We wanted to build a platform for anyone with an idea to give it a go and prove themselves. I love the diversity of the campaigns that we’ve seen so far. We will never lose sight of our vision to democratize finance, even though the product and strategy have changed. The decisions are still and will always be made by the crowd. 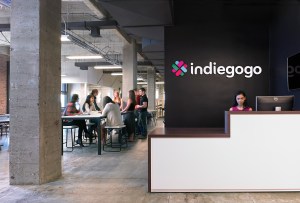 Above: Indiegogo’s offices in San Francisco

VentureBeat: Did you always know you wanted to be an entrepreneur?

Ringelmann: I started Indiegogo because I saw it as a means to an end. I realized I had to leave my job in finance to change the industry for the better. I grew up knowing how hard it is to grow a business. Indiegogo was my first real company; my other ventures (including a stint raising money for artists in New York) failed.

VentureBeat: While we’re on the topic of failure, should founders give up if their project or idea fails to raise any or much money on Indiegogo?

Ringelmann: Some people fail, but they learn a lot along the way about what their customers don’t want. We have a data science team that shares insights with teams about how to successfully raise funds. We are educating the whole community through the data of the system. If you fail, you could learn from it, come back, and try again. We have a strong support system to help people more forward with confidence.

VentureBeat: How will the SEC’s crowdfunding rules affect Indiegogo in the short term?

Ringelmann: We are excited about the SEC rules and are currently being as helpful as we can be to the SEC. Once the rules are finalized, we’ll determine if there are new business opportunities. We plan to revisit the equity question later down the road.

VentureBeat: IndieGoGo has propelled a number of hardware projects into the spotlight (Canary, Kreyos smartwatch, Scanadu Scout). Are gadgets a strong focus?

Ringelmann: Hardware has taken off. We’ve seen growth of over 1,000 percent. For hardware entrepreneurs, it’s an incredible market testing platform. They are really able to test an idea and experiment with pricing and features. Makers can really go out and learn about what their funders want and are willing to pay.

VentureBeat: Where did the name “Indiegogo” come from?

Ringelmann: We were headed to an event and wanted to print cards, but didn’t have a name. We wanted a word that incapsulated our vision and independent spirit. An action word. I wasn’t convinced at first by “Indiegogo,” but we tested it, and people liked it.

VentureBeat: What tips do you have for founders of early-stage startups?

Ringelmann: I used to think I needed to be a Jack or a Jane all trades. But the best entrepreneurs I know are aware of what they’re good at and what’s they’re not. Bring on talent, and begin the process of letting go. To get a company off the ground, initially you might need to roll up your sleeves and do everything. But when you’re larger, you’ll create more value for the company by leveraging the strengths of others.

VentureBeat: How do you keep the core values in tact as the company has grown?

Ringelmann: We do this drawing exercise to get at the core themes that brought us all together in the first place. Each quarter, we give all the employees four slips of paper with a word scrawled on it. Every individual fills out the name of someone who exemplifies that word — typically a positive value, like hardworking or fearless. We hand them out so people on the team realize that they’re appreciated.

VentureBeat: Women create only eight percent of venture-backed startups. What’s it like being one of the few female founders in Silicon Valley?

Ringelmann: Indiegogo is helping to level the funding playing field. We know that it’s harder for women to succeed. In venture capital, only three percent of businesses have a woman on their executive team. Meanwhile, on Indiegogo, 47 percent of campaigns that reach their funding target are run by women. We’re literally changing the industry by showing it without having to talk about it. It’s just happening.

VentureBeat: On that note, is Indiegogo an equal opportunity workplace?

Ringelmann: I left finance because it was biased and created these buddy systems. We’re building a system where everyone has access to equal opportunity. At Indiegogo, half of our employees are women, and half of our leadership is women. None of that was done in a quota fashion. It was organic. I feel a responsibility to share this story, as I’m hoping it will inspire others. We’ll get there.

VentureBeat: Do you have any executives or mentors that you most admire?

Ringelmann: My parents. They ran a brick-and-mortar business and were incredibly loyal to their employees. I always ask myself what my parents would do. I also look up to Sheryl Sandberg and the Lean In movement. It’s empowering to the female employees at Indieigogo. Sandberg has taught me that there’s no better method to dispel myths than just being an amazing entrepreneur. Oh, and you happen to be a woman. Boom — You are the change.