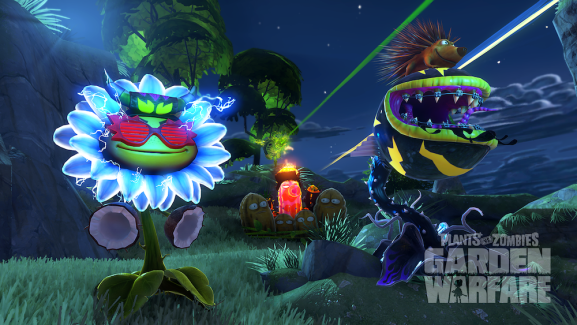 Outlandish customization is the main reason to replay the missions again and again.

The Plants vs. Zombies series is known for its cast of appetizing plants and strangely attired undead attackers. Each plant has a specific purpose, like producing sunshine or spewing green peas, while each zombie has a unique method of devouring your defenses. For the 3D world of Plants vs. Zombies Garden Warfare, many of the plants have apparently undergone gene therapy to become versatile Frankenfoods, while the zombies have received extra training to become a formidable undead army.

In the original games, the Peashooter is the Plants’ most basic defense. It’s the first turret that you can build after you collect enough sunshine, and later, you’ll be able to upgrade it to fire faster or in multiple directions at once.

In Garden Warfare, the Peashooter is an agile foot soldier, firing a slow, mushy glob of peas that causes splash damage. With enough experience, it develops the ability to run quickly and jump higher in Hyper mode, launch an area-clearing explosive Chili Bean Bomb, or take root with an extremely high-powered Gatling Pea. It’s a well-balanced unit, but the splotchy main weapon feels a bit like firing congealed soup.

In the original games, the Sunflower was essential for gathering resources, but you don’t need any sunshine to augment your forces in Garden Warfare. Now, the Sunflower fires a blazing-hot death ray at enemies while remaining rooted in place.

It can heal nearby plants, using a beam similar to the medic’s healing gun in Team Fortress 2. The Sunflower can also plant healing stations around the map, which is a lot friendlier than setting zombies’ hair on fire. Every team should have at least one healing Sunflower, because these support units are far from helpless.

The Chomper probably represents the biggest departure from the first PvZ games. In the originals, the Chomper would stay put and chew up the first zombie to cross its path, but in Garden Warfare it acts as a stealthy, up-close assassin.

It can burrow underground to gobble up enemies in one bite or sneak up behind them and draw them in to your maw. The Chomper can also slow down prey with purple goop or lay vine traps that temporarily disable zombies. It doesn’t have any ranged attacks that cause damage, so this is probably the best choice for players who like to make every attack feel personal.

The most sniper-like character of the Plants team, the Cactus can fire pointy projectiles with a great deal of accuracy. It was used in the original game to take out both air and ground targets, and you can still do that in Garden Warfare. However, the slower rate of fire requires you to pull the trigger for each shot, instead of holding it down.

The Cactus can also plant Potato Mines (which still explode beautifully, but without the “Spud-Ow!” onomatopoeia) and set up defensive Tall-nuts for cover. You can even take to the skies with a flying Garlic drone, which is great for exploring the map and surprising zombies with a sudden downpour of bullets.

Most of the zombies in the first two Plants vs. Zombies games looked like ordinary, everyday folks, except for the decomposition. Business zombies held newspapers, and dancing zombies wore disco suits. The Soldier Zombie in Garden Warfare is much better prepared for combat than those civilians.

He carries a rocket launcher, which he can use to jump extremely high or devastate a cluster of Plants. With a few upgrades, he can throw Stink Clouds, which cause a little bit of damage, but more important, obscure everyone’s view so that the zombie can maintain the element of surprise.

The original game featured a digging zombie, whose girth and expressive sideburns seem the most similar to the Engineer in Garden Warfare. Instead of burrowing in your garden, the Engineer can toss sonic grenades to stun Chompers, or ride his jackhammer into battle like a noble steed. Like the Cactus with her Garlic drone, the Engineer can launch a robotic zombie head for an aerial view of the battlefield.

The Scientist Zombie has a shotgun-like blaster that is really only useful at close range, so he can combine it with his teleportation ability in order to appear suddenly next to your opponent. He can also lob explosive sticky bombs and place purple healing stations to regenerate nearby zombies. Think of him as a combination of the Chomper and Sunflower on the Plants side, but with a sporty lab coat.

If you ever encountered this football-playing zombie in the original games, you knew you were in trouble. With full pads and a helmet, this athlete could rush ahead and quickly start crushing your defenses.

In Garden Warfare, the All-Star Zombie has a sudden rush move that causes a lot of damage, but he normally can’t run very quickly. Instead, he’ll hang back with a giant Football Cannon, which churns out bullets until it overheats. For special moves, it can generate a shield in the shape of a tackle dummy or punt an explosive Imp zombie, who detonates just like the Peashooter’s Chili Bean Bomb.

Beyond these eight playable characters, Garden Warfare’s co-op and checkpoint capture modes let you summon minions at either potted plants or freshly dug graves. Those one-time use items have to be collected through bonus packs, and they don’t have nearly as much versatility as the main characters and their special abilities.

Half of the fun is unlocking these attacks one by one, and discovering new ways they let you tilt the battle in your team’s favor. In our review of Garden Warfare next week, we’ll tell you how all these characters, items, and abilities work together, and whether it retains enough of the feel of the original strategy games.