If you want to make money on mobile, give away your game — especially in Japan, Australia, South Korea, the U.K., and the U.S.

Microtransactions from free-to-play games accounted for 79 percent of all revenue on the iOS and Google Play app markets in the U.S. in January, according to a report from app-tracking firm Distimo. That’s up from a 66 percent market share from the previous year. In January 2012, that figure was only 46 percent. This is in line with the rest of the world, where free-to-play is dominating mobile revenues in both established and emerging markets.

“One of the most evident trends in 2013 was the steadily growing revenue share of the freemium business model,” Distimo analyst Christel Schoger wrote in the report. “Free apps with in-app purchases generate the majority of the revenue in the app stores.”

While 79 percent is a huge chunk of a market, the U.S. actually still has a sizable audience paying an upfront price for apps. That’s especially true compared to markets like China and Japan. Distimo found that a massive 94 percent of the revenue generated in the app stores in those countries comes from microtransactions in free-to-play games.

For its report, Distimo also worked with app-marketing platform Chartboost to determine the potential revenue that developers could squeeze out of gamers in certain markets. The two companies found that Japan, Australia, South Korea, the U.K., and the United States offer the best opportunity due to their relatively low user-acquisition costs compared to average revenue per download (ARPD). 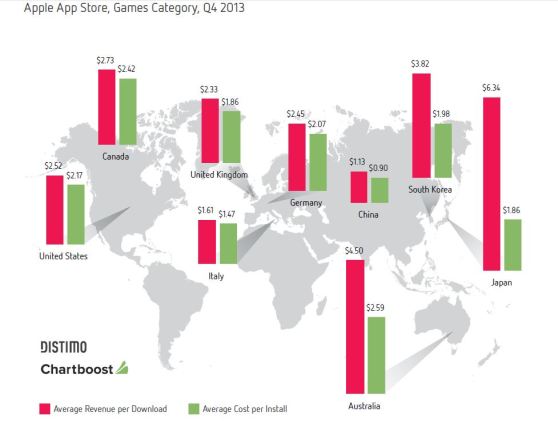 Above: Distimo’s chart measures ARPD versus the cost per install.

“On average, one download is worth $5.32 in Japan,” wrote Schoger. “[This validates] the enormous potential of the Asian app market.”

Developers are already taking advantage of the Japanese mobile gold mine. Developer GungHo Online Entertainment’s role-playing title Puzzle & Dragons earned around $5 million a day at points in 2013. Western developers like Supercell and King also made concerted efforts to establish a presence in that market.

“Our analysis showed that the paid business models generate a higher ARPD and can still be a viable monetization option despite lower download volumes,” wrote Schogel.

But the analyst also noted that free-to-play is where mobile is making its banks.

“Even though the overall ARPD for the freemium business model is lower, free apps with in-app purchases are the dominant business model and proved to be the most profitable with the largest revenue shares.”