If Struq CEO Sam Barnett gets his way, no ad anywhere would ever be delivered if it was not personalized. And every ad would be tailored to you, your likes, your previous purchases, your location, your device, and precisely what you’re doing at this very moment.

Struq has been in the digital ad business since 2008. It has offices in New York, Sao Paulo, Istanbul, Germany, and London, works with brands like Boss, Levis, and Uniqlo. And over the last two years, the company has delivered an astounding 35 trillion personalized ads.

For a “very long time” Barnett told me, the company has been working in private beta on its latest offering, which he says is a complete game-changer.

The key, of course, is identifying individuals.

The more an advertiser knows about you, the better decisions that advertiser can make about whether to even bother showing you an ad. If it’s a product you are unlikely to like or want, that’s just wasted effort, wasted money, and wasted attention. The problem for the advertiser, however, is that you’re not just on your old desktop or laptop anymore; you’re on your smartphone on the commute in or your tablet on the sofa in the evening. In other words, it’s been hard to understand exactly who you are, on all those different platforms.

Until now, the best-guess approach has been only about 50 percent accurate. Not anymore.

“We can identify an audience with 100 percent accuracy,” Barnett told me. “We can connect those dots, and then we can increase retailers’ conversions retailers 14X.”

Of course, that only works about 60-70 percent of the time. The rest of the time, Barnett would prefer not to show an ad at all. While most ad personalization platforms work on percentages and probabilities — and Struq will too, if an advertiser wants it to show ads to people who haven’t been conclusively identified — Struq’s new technology depends on a shadowy array of “business development relationships” that Barnett wouldn’t reveal.

It’s all very hush-hush — because this is your identity we’re talking about. 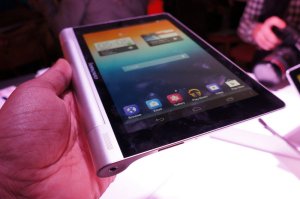 “I’m not allowed to name them … or else I would not just get my knuckles rapped but probably my face punched too,” Barnett told me. “And, probably, I’d end in court too.”

Competitors such as Drawbridge and Tapad are also trying to pinpoint your shifting digital identity to personalize ads for you, but Barnett said they use probabilistic approaches which are only accurate 45-85 percent of the time, and therefore waste advertisers’ money 55-25 percent of the time an ad is delivered.

Drawbridge agrees, but only to a point.

“Yes, we’re probabilistic … but we’re using science and technology,” Drawbridge VP of Marketing Daryl McNutt told me. “Deterministic has a lot of privacy concerns. We anonymize all of our data, and we’re still better than 85 percent accurate.”

Most of us only go to 8-20 sites whether on mobile or desktop, McNutt said, and it doesn’t take long for statistics to figure out with very good accuracy who you are when there’s such a limited sample.

Which pretty much sets up the debate: Do we want better ads, or do we want privacy?

Barnett is fairly clearly on the side of better ads … and better sales.

“We want to personalize every ad a user sees,” he told me. “In addition, we can predict how likely a user is to buy from a retailer with 85 percent accuracy.”

Struq’s new ad personalization platform will come out of private beta in the next few days, Barnett said, and has already been tested by 350 of the world’s largest retailers, in 19 countries.