Fitbit’s Force, a health-tracking wristband that’s truly difficult to talk about without the occasional Star Wars pun, is being taken off the market.

Following complaints about skin irritation from some users, Fitbit announced today that it will stop sales of the Force and is beginning a voluntary recall of the device. Customers will be able to return their Force units to Fitbit for a full refund.

“While only 1.7% of Force users have reported any type of skin irritation, we care about every one of our customers,” wrote Fitbit CEO James Park in a blog post today. “On behalf of the entire Fitbit team, I want to apologize to anyone affected.”

After users began reporting skin irritation from wearing the Force, Park says Fitbit conducted a full investigation using independent labs and medical experts. They concluded that affected customers were experiencing contact dermatitis, most likely from an allergic response to the Force’s rubber case.

“All Force materials are commonly used in consumer products,” Park said. “However, some users may be reacting to the nickel present in the surgical grade stainless steel used in the device. Other users are likely experiencing an allergic reaction to the materials used in the strap or the adhesives used to assemble the product.” 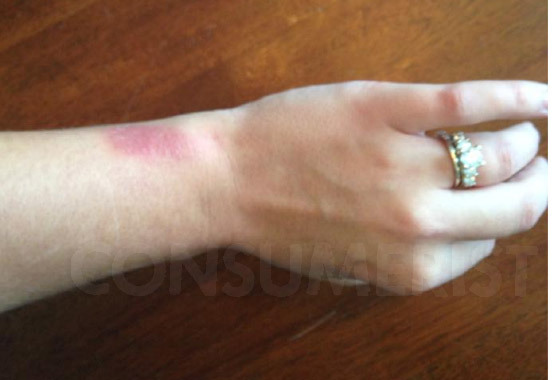 Above: A rash brought on by Fitbit’s Force.

The complaints are a reminder that even a company with extensive experience building wearable devices can run into trouble. It’s reminiscent of Jawbone’s massive recall of its first Up health tracker — but while that device simply stopped functioning, affected Fitbit users were actually physically harmed by the Force.

Jawbone ended up taking a year to fix the design flaws with the first Up. Park notes that Fitbit is gearing up to announce a new health tracker soon, so there’s a chance the company won’t even need to bring the Force back to the market.