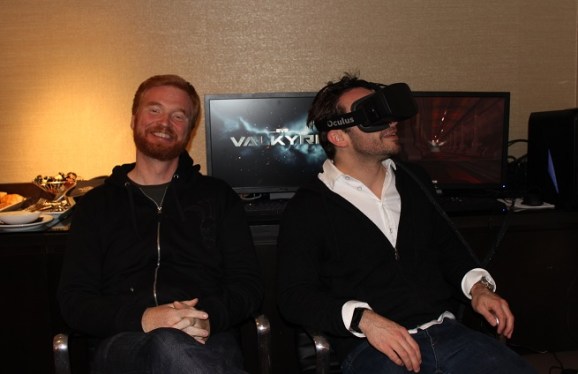 The developers at CCP Games, the maker of Eve Online, were so excited about the virtual reality goggles from Oculus VR that they made their own game in their spare time to run on the Oculus Rift. Their creation, the sci-fi dogfighting game Eve: Valkyrie, turned out so good that it is now going to be a lead exclusive game for the Oculus Rift when it launches sometime in the future.

That lucky scenario for Oculus unfolded quickly. And it is just one more event in the whirlwind comeback of virtual reality and the young history of Oculus VR. We caught up with Hilmar Veigar Petursson, the chief executive of Iceland-based CCP Games, and Brendan Iribe, the chief executive of Oculus VR, in an interview at the recent Dice Summit in Las Vegas. At Dice, Veigar Petursson announced that Eve: Valkyrie will be turned into a full game that will fit inside the Eve science-fiction game universe and be an exclusive title for the Oculus Rift.

GamesBeat: With Valkyrie, do you have a similar aim as with Dust 514 [a first-person shooter set in the Eve universe]? Or do you feel like there’s a different goal with that?

Hilmar Veigar Petursson: Valkyrie is much more focused on the core gaming loop, the moment-to-moment experience. That’s something we’ve not been able to bring as much improvement to in Eve. The actual space flight is a very complicated thing to do when you’re having thousands of people battling in these massive fleet fights. There’s a trade-off between small battles and large battles.

We’re very focused on bringing that fast-paced space experience into the Eve universe. We’re taking some learning from Dust as far as maybe not leading with the connected gameplay parts of it, but allowing the experience to stand on its own as a tight dogfighting experience. That’s working out really well for us. It’s also a smaller game. The team is very small and focused. We’ve learned from what we’ve done with Eve and Dust about building this sort of onion from the inside out, not from the outside in. We often tend to start with the abstract and focus it down from there. Here, we’re building it from the core experience and then adding layers on top.

GamesBeat: It seemed like Dust had some of that purpose as far as broadening the appeal of Eve. Valkyrie isn’t necessarily tasked with that. Oculus is going to be a smaller installed base, right? There’s not as a big a chance to become universal as Dust might have had.

Petursson: The main thing, though, is to tighten up the spaceship experience in the Eve universe, and do that fantastically well. I know that if we succeed in that, the next steps can take the game in many directions. We can incorporate some of the aspects of Valkyrie into Eve. We can find ways to connect your Eve gameplay and Valkyrie gameplay together. Often Eve players are playing other games while they’re playing Eve Online. They could play Eve and Valkyrie at the same time. There are so many places we can take it to.

GamesBeat: It seemed interesting that Valkyrie was kind of unplanned. People on your staff just started experimenting with it. It’s almost emergent within your own studio.

Petursson: Yeah. A lot of people have pointed out the emergence of Valkyrie and the emergence of stories in Eve. That’s also what I hope to be able to bring to CCP, to make CCP more of a sandbox and enable these kinds of things to happen. CCP’s almost 20 years old now, founded in 1997. We’re at the next generation of interesting things happening here. Valkyrie is a great example of how we can harness some of the ingenuity and drive of our employees.

The way it came about, we have a program similar to Google’s, where people can spend 20 percent of their time on other projects. We’re VR enthusiasts. We backed the Kickstarter as a company, and many of us as individuals as well. All the dots came together in one moment. Then we said, okay, let’s take this to Fan Fest and see what people think of it. Of course, everyone loved the hell out of it.

To be able to embrace something like this, you have to have flexibility within the company and your plans. You have to be spontaneous, to take this serendipity and drive it.

GamesBeat: How exclusive is it to Oculus? In what way is it best on Oculus?

Petursson: It’s exclusive on the Oculus, on the PC. It’s the only announced platform. Oculus is the only VR platform out.

GamesBeat: What was involved in deciding to do that, from both your sides? To do an exclusive and to get your hands on an exclusive?

Brendan Iribe: It’s been our favorite Oculus game for a long time. We like a lot of games, but Valkyrie has shown what a dedicated team can do on the platform. We’ve been, in a way, pushing on these guys to do something together.

Petursson: This is really where the project was born. It’s natural to follow that line through. We look forward, of course, to more competing announcements and street dates and things like that, so that we can try to focus on bringing people into it. But for now, the focus is on bringing it to this announced VR platform on the PC. With Oculus we’re focused on making sure that we harness all the power that’s already behind the game.

We’re on the Crystal Cove version, which I hope you’ve had the chance to try out. It’s a great iteration. It’s something that the company collaborated on very intensively over Christmas. We hope to bring more updates to the show experience at the upcoming trade shows. The game has progressed a lot inside CCP. We’ve been running play tests throughout the company. It’s amazing that we’re still basically showing the prototype. The actual game is on a more aggressive production schedule. We hope that as we merge those two things together, we’ll be seeing some smiles when people take off their goggles.

GamesBeat: Do you guys both want it to be the first game available, the launch title so to speak? Is that timing not necessarily clear right now?

Iribe: It’ll be one of the first games available. Based on our discussions so far and the recent announcement, it’s going to be there right when we launch. CCP will probably be ready before we are. We’re just trying to get all the different bits right on the platform side.

If you have a little bit of that extra time, the game is only going to get better. Again, what Hilmar was saying with the fact that we’re still showing the tech demo, still showing the prototype — the team has been hard at work on the really next-generation version internally, which we haven’t shown yet. With that, paired with our forward progress on the hardware side — I think everyone has seen a glimpse.

When I said it was our favorite game, it’s also been the game that the community reacted the most positively to. People have tried it and said, “This is it. This is a real made-for-VR game with a lot of production value behind it.” But nobody’s seen that next step, which we’ll be showing off in the future. That next step will be the one that ends up shipping to consumers. It’s going to blow people’s minds.