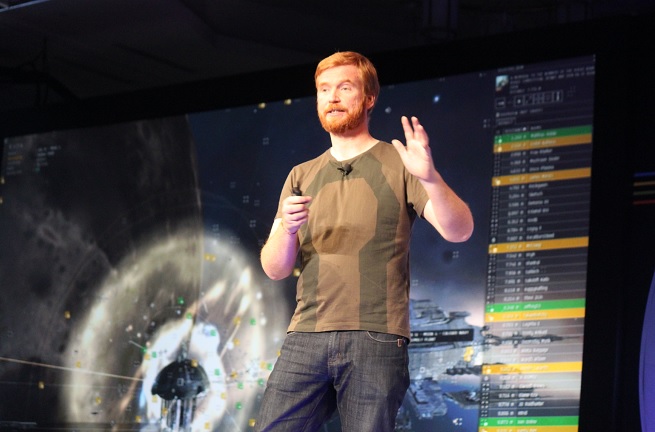 GamesBeat: Do you have any worry on your side, the software side, that you’re going to need to create the game for a standard VR experience? Oculus may be the only show in town right now, but eventually there’s going to be multiple virtual reality platforms. You might have to redo the game for each one.

Petursson: What I would say to that, we’ve been operating Eve Online for over a decade now. We’ve brought Eve to many platforms. We’ve done many tech overhauls. We’ve changed out the engine three times.

The main thing is not to overthink it going in. Once you understand what the game is, the design is tight, the experience is flowing, standing it up on something new — Oculus themselves are going to propel this space into the future with many amazing inventions. If you paralyze yourself by trying to take all that into account, you end up not achieving on the core mission.

We’re very focused on bringing a kick-ass experience to this platform as soon as possible. We look forward to hearing exactly when that can come about. [Laughs] I realize that it’s more complicated to fill up the world with 3D glasses than it is to make a space combat game. What happens after that we’ll see based on feedback from our players and from the world. That’s what’s made us successful with Eve. We’ll bring that here as well. I hope that Valkyrie, like Eve Online, will outlive us all.

Iribe: We’re certainly bullish on the launch and having great content. Valkyrie is going to help attract users to the platform. We’re excited about where we’re going to go in the first few years, especially given some of the core improvements we’ve been able to make on the technology side. The quality of the consumer experience, the ability to deliver a comfortable experience, and the fact that the nausea, the simulator sickness, is no longer the biggest challenge — we’ve gotten past that now. Valkyrie is going to be a comfortable experience.

We believe that there’s a huge opportunity to scale when there’s great content like this. We may need more than just one game, but it usually only takes that one game to really help drive it. We feel like Valkyrie is right there. It’s an awesome experience.

GamesBeat: So Oculus’s $75 million funding round is going toward getting content as well?

Iribe: Yes. We’ve been vocal about that. We’ve brought [David] DeMartini on board. He’s heading up the worldwide publishing effort, which is really more about going out and supporting developers.

This is going to be a platform where a lot of developers will be self-publishing, like on a mobile platform. We want to be out there supporting that effort. We want to put our own resources, both personnel and funding, behind great content. We want to see the ecosystem expand. We’ll be investing a lot into the ecosystem, I think more than most people expect, and more than we’ve talked about so far.

GamesBeat: With your demos so far, have you figured out what’s the optimal experience for the depth and the duration of it? Is this something you think people will play for minutes at a time, or will they actually play for quite a long time and go up 50 levels or something?

Petursson: We’re focusing the game experience to be very frantic and fast-paced. We want to bring a contrast to the experience of flying a spaceship compared to Eve, which is very long and very committed and very complicated. We’re thinking about combat sessions with a duration around 15 minutes, and then you have an outcome. Then you can do more and more if you want to, but we’re aiming for that shorter session length.

That’s part of the feedback we’ve gotten about Eve many times. It’s very difficult to play Eve for only 15 minutes. You can go into the market and train your skills a little, but if you’re into the top-tier gameplay in Eve, it’s usually a larger time commitment. We’ve tried various game modes and levels and other ways to bring that about. We continue to get feedback within the company on what works, what’s balanced, what expectations people have based on other shorter-session games out there.

Above: Early screens of Eve: Valkyrie in action.

A lot of opportunity opens up space, with the verticality and the 3D aspect of it. You can look past things, fly past rocks, go through space dust, go inside things. We can bring in so many things from the Eve universe. Just one example, take the Titan Monument that we released last week. Take those large wrecks of titans and create a procedural way to break them apart and build massive battlegrounds, and then you could have Valkyrie players flying spaceships within that thing. We could bring things like that.

We’re just nailing down exactly what’s the best way to start to get that experience together, get the session length, get the pulse-pounding moments of piloting a fast spacecraft in this universe. Then we’ll have the opportunity to expand on that in the years to come.

GamesBeat: Are you still seeing other things that will take Eve to the widest audience, to the mass market? Is that one of your ambitions, to take a game with a smaller, deeper, lucrative audience and expand it out into a broader game?

Petursson: We’ve been working on simplifying things for people to get into the core loop of Eve Online. We’ve made some progress, and I think there’s more progress to be made. But Eve Online is also a very particular experience. We want to think about, okay, if Eve is the apex experience – if it’s the top of the pyramid, with all the massive battles and massive stories and player-created drama and emotion – then maybe we can have a tier below that. I say “below” in terms of complexity.

More people could engage in that tier. We have something like Valkyrie there or something like Dust there. Then we could have a tier below that with things like the comics – shorter-form stuff, linear media. And then ideally we want to put these stories that happen in this pyramid in things like a television miniseries. You give an agency to the people that create all the drama, to have that content flowing down here. By having so many people consume that, you give agency back here.

Then you have an interaction pyramid. All the way at the top, you can be a fleet commander in Eve Online and destroy half a million dollars in the blink of an eye. Maybe that’s taking it a little deep. Not every goes there. Instead, you can go here and dabble a little here, or maybe just read about it or watch it on TV. But knowing, as you see it on TV, that you can go to the top there and affect the narrative, that’s something I want to do.

It’s like when I watch Game of Thrones. I want to get in there and be a part of it. But it’s not a living world. It’s a story that’s already written. If we get this right, if we have a system that works with this transmedia approach and leverages the fact that we have all this legacy from the first decade of Eve, it’ll be simpler to interact with these tighter experiences that are still a part of the grand whole. We’ll have an ability to make the drama more personalized, instead of plot-driven as it currently is.

That’s our vision, to mix it all together into this massive thing. It’ll probably take us 10 years to build on top of what we already have. That’s the thing with a vision. You need to have it, and then you go and do it. 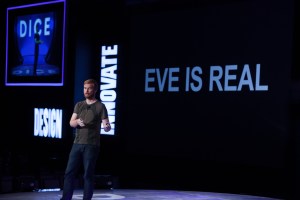 GamesBeat: You have your own pyramid, right?

Iribe: It’s an awesome vision, though. We love working with partners who have such a broad vision. VR will play an important part, just like Hilmar said. You watch a show like that, you want to go and be inside it. VR gives you that opportunity.

Just version one of the consumer experience for Oculus is going to deliver a sense of presence, a sense of actually being there, that does trick your brain into thinking you’re truly there. You’ll watch the TV show and say, “Yeah, I want to go be in it.” You’ll jump into the VR experience and say, “I’m really here. This is it. I’m here.” It’s going to be fun to play one part in that.