Huawei isn’t pulling any punches with its hefty lineup of 4G LTE gadgets at the Mobile World Congress tradeshow in Barcelona.

Altogether, the Chinese device maker revealed five devices on Sunday: two small tablets, the MediaPad X1 and M1; the Ascend G6 smartphone; a smartband fitness tracker that doubles as an earpiece, the TalkBand B1; and a speedy mobile Wi-Fi device, the Huawei E5786. Here’s the lowdown on each one.

Huawei is late to the tablet market, but it’s hoping to make a splash with its two new offerings: the 8-inch MediaPad M1 and the 7-inch MediaPad X1. 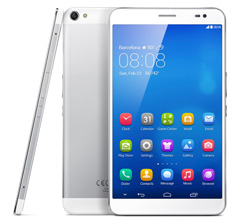 The X1, the more expensive of the two gadgets, could be viewed as a “phablet” rather than a tablet. The Android tablet includes a SIM card slot that enables calling and texting in addition to 4G LTE data connectivity, so device consolidators could theoretically use it as a smartphone.

The X1 sports a 1,280 x 920 pixel display, a crisp 323 pixels per inch. Inside, it includes a 1.6 GHz quad-core processor and 16 GB of built-in memory, with a microSD card slot for additional storage. Huawei estimates its 5,000 mAh battery will power the device for more than three days during “normal use,” or for roughly 500 hours on standby. It also offers two impressive cameras: a 13-megapixel camera on the rear, and a wide-angle 5-megapixel camera on the front.

The larger, less-expensive M1 features the same quad-core processor and 4G capabilities, but the battery, cameras, and resolution are lower-spec. The battery is a bit less powerful (4,800 mAh), the screen is a slightly lower resolution (1,280 x 800 pixels), and the cameras are a significant step down (5-megapixel rear-facing, 1-megapixel front-facing).

Above: The Ascend G6 comes in a range of colors.

The Ascend G6 looks fairly similar to last year’s Ascend P6, though its not as crazily narrow (it’s 7.9 millimeters thick compared to the P6’s 6.2mm) and the brushed metal back panel has been replaced with a rubberized plastic back. Huawei will likely compensate for these design changes with a cheaper price point, though it has yet to announce official pricing details. It’ll go on sale in April, according to Huawei.

Huawei’s TalkBand B1 is the most curious device the gadget maker revealed in Barcelona.

The ‘Band’ part is pretty obvious: You wear it around your wrist and it tracks steps taken, calories burned, and distance traveled. It also functions as a sleeping pattern monitor with a smart alarm clock function that wakes you up during a period of light sleep.

But the ‘Talk’ part is a little more surprising: The band’s 1.4-inch flexible OLED display doubles as a removable earpiece that turns the wearable into a wireless calling accessory. It can pair with phones over NFC.

Huawei says the TalkBand’s 90 mAh battery will last for six days of regular usage. The gadget maker plans to release the TalkBand in China next month. Folks in Japan, Russia, Western Europe, and the Middle East will have to wait until the second quarter to strap it around their wrists. It’ll cost 99 euros, or about $136. 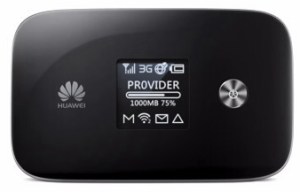 The gizmo will support download speeds up to 300 Mbps and upload speeds of up to 100 Mbps. Naturally, you’ll need a blazing fast mobile phone network to reach those maximum performance standards.

The E5786, which uses the latest dual-band Wi-Fi standard (802.11ac), is said to support up to 10 connected devices. It includes a 3,000 mAh battery that should last for around 10 hours of use, according to Huawei. It also offers reverse charging, which means it juice up your smartphone if you’re running out of power on your mobile device.