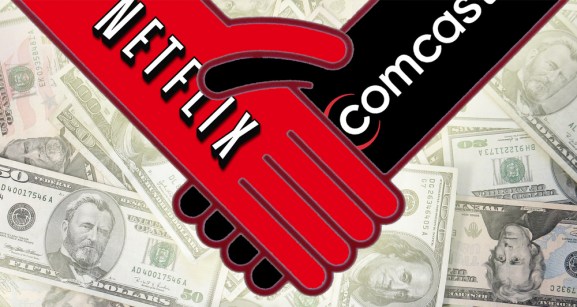 Comcast’s broadband customers will soon be able to stream Netflix content with fewer hiccups — the result of a landmark deal between the two companies with major implications for Netflix’s bottom line.

Netflix has agreed to pay Comcast for a direct connection to the Internet service provider’s network, which will improve its streaming video quality for Comcast customers, the Wall Street Journal reported today. Comcast confirmed the “mutually beneficial interconnection agreement” in a statement emailed to VentureBeat, but declined to provide the terms of the deal.

Whatever Netflix is paying Comcast, the multiyear deal could force Netflix to cough up money to other major broadband providers for similar performance guarantees. Streaming quality has suffered in recent months, especially for Comcast and Verizon customers.

Netflix was pushing Comcast to connect to its servers without compensation, but the broadband provider refused to take on the heavy traffic load free of charge. After seeing average speeds to Comcast customers drop as much as 27 percent during peak hours since October, Netflix buckled and agreed to pay.

Netflix chief executive Reed Hastings had wanted to put Netflix servers directly inside Comcast’s data centers, but Comcast will connect to Netflix’s servers through third-party data centers, according to the Journal.

News of this deal comes just 10 days after Comcast announced its intention to buy Time Warner Cable for $45.2 billion. If regulators allow that merger to proceed, Comcast would become the largest broadband provider in the U.S. by a significant margin, serving 30 million paying households.

Here’s the official statement from Comcast on its agreement with Netflix:

Comcast Corporation (Nasdaq: CMCSA, CMCSK) and Netflix, Inc. (Nasdaq: NFLX) today announced a mutually beneficial interconnection agreement that will provide Comcast’s U.S. broadband customers with a high-quality Netflix video experience for years to come. Working collaboratively over many months, the companies have established a more direct connection between Netflix and Comcast, similar to other networks, that’s already delivering an even better user experience to consumers, while also allowing for future growth in Netflix traffic. Netflix receives no preferential network treatment under the multi-year agreement, terms of which are not being disclosed.