In extreme situations — like a zombie apocalypse, for example — some people lead while others are best on their own. Dean Hall, the creator of the multiplayer zombie-survival title DayZ, is probably one of the latter.

Hall says he plans to step down as the lead on DayZ later this year. He will also leave the Prague-based company Bohemia Interactive. The developer explains that he is better suited to ramping up production on games rather than maintaining a well-functioning studio over an extended period of time, according to an interview with Eurogamer. He plans to return to his home country of New Zealand to start his own studio and begin work on a new multiplayer game. 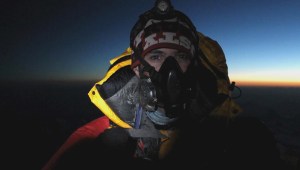 Above: Dean Hall on the summit of Mount Everest.

“I am a grenade,” Hall told Eurogamer. “I have a specific use. I’m really good at risk-taking and making other people take risks. I’ve always been good at that in my life. Maybe I’ve got the gift of the gab, so I can talk. I can explain something, and I can talk people up to the ledge and get them to jump off it.”

Hall has overseen the production and release of two versions of DayZ. The first was the 2012 mod for open-world military shooter Arma II: Operation Arrowhead. The second is the extraordinarily popular standalone version of DayZ, which Bohemia has already sold more than 1 million copies of since releasing it on Steam’s Early Access portal for unfinished games in December.

“But eventually, [I’m] the bad person to have,” said Hall. “Eventually, you don’t want the guy telling you to go over the top and get through. So at some point, I’ll be a disaster for the project — at least in a leadership role.”

Hall doesn’t plan to remove himself from DayZ while it is in an important stage of development. The shooter is available for the public to purchase, but it is currently in an early alpha-testing phase. The studio plans to add numerous features, and it will release a beta version later this year.

As for his post-DayZ plans, Hall says that he has a few ideas in mind that are similar in structure to DayZ.

“I feel like DayZ is a fundamentally flawed concept,” he said. “I’ve always recognized that. It’s not the perfect game — it’s not the [perfect] multiplayer experience, and it never can be. [It doesn’t have] the absolute spark that I want in it.”