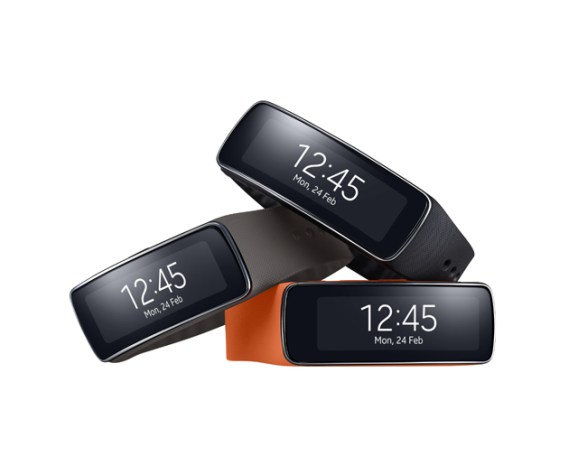 Samsung now has a fitness band to go alongside its smartwatches.

The company today unveiled the Gear Fit, a new health tracker that looks like a slimmer and more refined version of its Gear smartwatches. It sports a 1.84-inch curved screen and a slim design that doesn’t look that far off from some of the concepts we’ve seen for Apple’s iWatch.

Like Samung’s smartwatches, the Gear Fit shows you incoming notifications from a paired Galaxy phone, including things like incoming calls, texts, and meeting alerts. The Fit also packs in a pedometer (naturally), heart rate monitor, and a vaguely named “exercise” mode.

Samsung claims the Fit can get around 3-4 days of typical battery life and around 5 days of “low usage.”

While Samsung also introduced its new Galaxy S5 flagship today, I’m surprised by how much more the Fit intrigues me than that powerhouse phone. Perhaps it’s because the Fit truly looks like something new — like a cross between Nike’s FuelBand and a smartwatch. I wouldn’t be surprised if the Fit fares far better than Samsung’s recently announced Gear 2 smartwatches.

“Samsung understands that the next generation of wearable mobile solutions must directly reflect of the diverse interests and needs of consumers,” said JK Shin, Samsung’s mobile head, in a statement.

Samsung didn’t offer up any pricing details yet, but it says the Fit will be available in April.