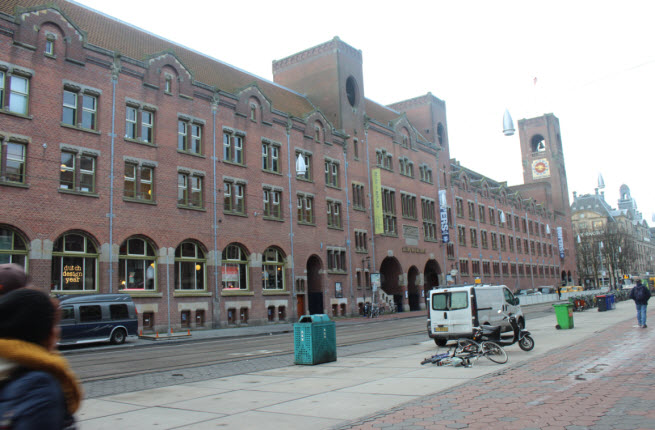 Above: Beurs van Berlage, a former stock exchange and home of Casual Connect Europe in Amsterdam.

GamesBeat: Jobs are great to have, but I think some people have always worried about the game industry and how it has a lot of violent or socially questionable content sometimes. Does that part of it concern you in some way?

Leeftink: Well, if you look at what happens and what’s produced in the Netherlands, that’s not our main concern, I would say. I mentioned that we’re already pretty big in the applied overseas gaming industry. It may be a bit typically Dutch, but… I’m not very worried about these kinds of developments. I’d also say that for the very aggressive… One thing, we’re rather unconventional in the Netherlands. We’re open-minded. But we also have rules, so… It’s not a main concern. In fact, not any more or less than it is for any other industries.

te Brake: I don’t think we’re going after any GTA kind of titles. What I’m seeing right now—You saw some guys on stage yesterday, and you saw the type of games that they make. It needs to be fun, 110 percent entertainment. That’s the genre. Clash of Clans is a war game, of course, but the characters and the style are such that it doesn’t have that aggressiveness. Having said that, World of Tanks, I wouldn’t mind having one of those in Holland. It’s just shooting at tanks. Then you have planes and you shoot at planes. No blood. [laughter]

Dexel: There’s a kind of code of conduct that’s already inherent in the culture of the Netherlands. 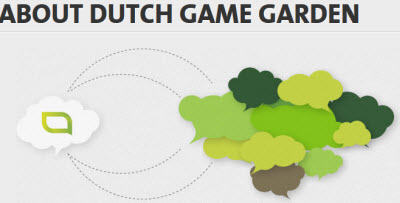 GamesBeat: Things like the incubators seem to be spreading all over. You have your Dutch Game Garden. Is that another area where more support or more incubators are going to be springing up?

Leeftink: We’ve seen incubators growing in the Netherlands in a lot of cities, a lot of places. Sometimes they’re stimulated by local governments or by universities. The way I see it, we don’t know yet what the right formula for incubators is. Maybe there are more successful formulas. Sometimes we’ll stimulate them with a little money. But what we’re looking for, and what incubators do, is bring people together, bring entrepreneurs and young talent together. That’s important for the Netherlands.

Dexel: In fact, you could say that every university here, and we have quite a lot of them, they all have incubators. Some specifically focus on certain areas, and they’re very successful, but we also have generic ones, and in those generic ones, it’s possible to start a gaming startup as well. But we’d also love to see some dedicated incubators like in Utrecht, where we have a critical mass that can really boost that.

te Brake: In Finland there’s already the mentality, the passion, of “I’m going to make a kick-ass game.” It’s the same in Holland. But access to growth money is easier there. In Holland there’s become a bit of an assumption that there is no money, so people think, “I’ll do my best with my game, out of passion, but I can only remain at this level.” The discussion we had yesterday, one guy was saying, “If I can make one good game a year, I’m happy.” And he really means that. But then I start to talk to him about, “If that one game a year isn’t happening, how do you survive?”

With J.P. van Seventer, who’s running Dutch Game Garden, we have that thing—Say you have two indies. One of them says, “I’m going to go for that one game. I’ll feel comfortable if I can pay the rent, and that’s it.” It’s nice to have that indie fascination. But then another indie says, “I’m going to make that big shot. I’m going to give it a try.” They should be getting the help that we now offer.

GamesBeat: The strange thing happening now is that you can create some very successful game companies, but not necessarily create a lot of jobs in the process. The Vlambeer guys are very successful with just two people, making games like Ridiculous Fishing.

te Brake: But if you do a risk analysis on that, suppose they have that one hit. But what about the second? And also, the game was played by many, many people, but the revenues are only a few thousand a week. So how much do you really buffer in times where maybe you don’t have a game that’s that successful? Everyone should make their own choice, but the fact is, if someone says, “I want to be the next Supercell,” there at least should be a blueprint for how we can help them.

Two, the incubators, obviously, are very attached to schooling. That means that free-to-play, the trends right now, should definitely be addressed better in schools than they are today. That’s where we can help. Having events like this is very important, but also, having someone that’s made his name in the industry invite them over and talk to those students.

GamesBeat: How much do you feel you’re sort of competing with other countries for the game industry? Do you feel like you have to pull some companies out of other places in order to bring them to the Netherlands?

Leeftink: I don’t really think in terms of competition with other countries. What we want to do is be very attractive to entrepreneurs and for investors to do games and do business in the Netherlands. Of course, we’re looking at other countries to see why they’re attractive in certain areas and whether we can learn from them. We think in terms of, “I want the Netherlands to be on the short list for entrepreneurs and investors when it comes to potential places to invest.” It’s up to them where they put their money, but we want to be a very attractive country to this industry. We do think, as I said, that we have all the ingredients available.

te Brake: If you look at cities, I know of one company that did a check and said, “We’re not going to Paris. We don’t want to be in France. We’re not going to Dublin. That’s too far out. Finland is always either too light or too dark, and highly competitive when it comes to recruitment.” So what remains to them is London, which is very expensive, and Berlin, which is very crowded when it comes to tech, and Amsterdam. We just need to be a little bit more proactive. We need to engage the gaming industry.

Leeftink: That’s what we’re doing here with Top Sectoren and the Netherlands Foreign Investment Agency. Other countries have these kinds of agencies as well. It’s not always about money. It’s very much about the climate. Where are the entrepreneurs and the venture capitalists? What’s a good environment? That’s something we’re trying to stimulate further.

GamesBeat: Where do you look at gaming in the broader context of technology companies that you want to have here? How do you view the gaming industry relative to some other categories?

Leeftink: What we see is that the game industry has a lot of linkages to other industries, which are more general. In that sense, we see that they’re very attractive assets to have. Also, in terms of branding, it’s about creativity. It’s about design. It’s about entertainment. We have, in the media sector, some great businesses in the Netherlands. Eyeworks just sold to Warner Bros. We have Endemol. For a country, it’s very good to have this kind of industry, where people feel good, where they enjoy strong branding, creativity, human capital, talent.

The gaming industry will contribute to solving some of these societal challenges we have, which is also a very important theme in the Netherlands. It certainly holds for this serious gaming industry – in health care, for example, and security and so on. Games and gaming will become more and more important and more and more accepted as a tool to improve. It’s an attractive industry to have flourishing in your country.

Dexel: If you look at the hardcore technologies, we have the high-tech research in Amsterdam and in Eindhoven. If you look into that kind of thing, a lot of technologies are coming from the Netherlands. That’s also available to new developers. It also has to do with user interface. It’s not just the game itself. We have crucial technologies available.