I’ve just completed publisher Square Enix and developer Eidos Montreal’s Thief reboot, and I’m sad. Not because it was too short — it took me about 10 hours to sneak through the main story. No, I’m sad because this will be the first experience many players have with Thief, and they won’t know just how great this 16-year-old franchise is.

Thief: The Dark Project, which the now-defunct Looking Glass Studios created and released in 1998, innovated the stealth genre. It was the first game to use things like light and shadow, audio cues, and a first-person perspective to create a slow-paced and atmospheric experience at a time when adrenaline-fueled first-person shooters were becoming all the rage. Many publications have called it one of the greatest games of all time. Two more entries in the series — Thief II: The Metal Age (2000) and Thief: Deadly Shadows (2004) — were also well-received by critics and fans.

With that in mind, I popped the new reboot into my PlayStation 4’s disc drive and discovered that Eidos Montreal does an admirable job of bringing Thief into the modern stealth-action genre. However, its lack of atmosphere and tepid storytelling prevent it from reaching the greatness of the earlier entries — or the greatness of games the franchise helped inspire, like Arkane Studios’ recent hit Dishonored. 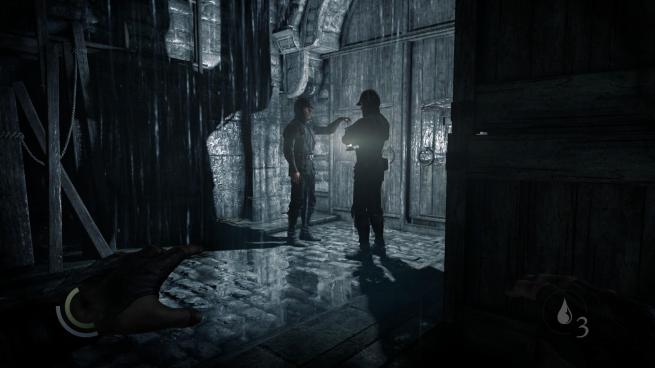 Above: Thief’s protagonist, Garrett, spies on some guards.

Like its predecessors, Thief tells the tale of Garrett, a loner who makes his living by robbing from others. The game begins in the bedroom of his latest victim, a passed out drunkard. As I guided Garrett around the room, opening every drawer and cabinet, snatching up anything that glinted before beating a hasty retreat out the window, I felt the warm glow of nostalgia. Slipping into Garrett’s leather boots felt so familiar. Spending time with him was like visiting an old friend.

At its core, the reboot retains many elements from the original Thief franchise. You still spend most of your time in the shadows, using a “light gem” on your heads-up display to determine just how well hidden you are. Pitch black means you’re well-concealed, while bright white spells trouble. Sound is still important for both avoiding detection and overhearing juicy bits of information about The City, the industrialized medieval setting for Garrett’s misadventures. It’s still a game that encourages you to explore every nook and cranny for hidden levers, traps, or secret passages. It makes you want to open every drawer and every cabinet, to enter and explore every room, even if it means risking getting caught because dammit you want that silver cup that’s worth five gold! But with the familiar gameplay comes a host of changes as Eidos Montreal drags Garrett and The City like an unconscious guard into the modern-day stealth genre.

Garrett is 10 years older, but time has only made the Master Thief quicker and more agile. By holding down the left trigger, he can now gracefully vault over walls, leap across rooftops, climb ropes, and sprint down darkened streets. While free running is just one of the many modern features Eidos Montreal has added to the reboot, it’s probably the best addition of the bunch and fits well with Garrett’s personality. A thief with a personal no-killing-unless-absolutely-necessary policy should be good at running away.

The most controversial addition to the series is probably the new Focus ability. This allows Garrett to see interactive objects in the environment, along with non-playable characters and valuables. It can also slow down time, giving Garrett more seconds to pick a lock or take down a guard during combat. Although some will find this ability useful, others will see it as hand-holding. Personally, I side with the latter.

Other somewhat controversial changes for Thief purists include waypoint markers, Life and Focus meters that need consumables to refill, and an upgrade system that trades gold earned on jobs for things like increased bow damage, increased ammo capacity, or reduced falling damage. None of these upgrades are truly egregious, but they don’t feel necessary either. Many of them are optional (see below) and players who don’t use them can still complete the game. 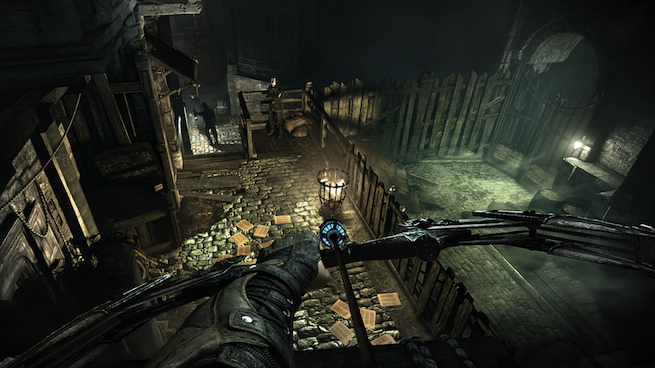 Above: Water arrows are useful for snuffing out torches.

Combat has also undergone some tweaking. In previous games, takedowns could only happen when NPCs were completely unaware of your existence. Going toe-to-toe with guards who spotted you usually ended in a quick and frustrating death. While Garrett hasn’t turned into a killing machine like Corvo, Ezio, or Agent 47 — the game is called Thief, not Assassin — he does have a few new tricks when it comes to surviving a fight. He can now quickly dodge sword blows and smack guards around with his trusty blackjack until an onscreen prompt triggers a cinematic knockout. It’s a bit clunky, but it works. Garrett is fragile, and he can die easily in a few hits, but it’s still a step up from the awkward combat of the original series.

Of course, the best way to win a fight in Thief is to avoid it entirely or strike from the shadows. Each chapter ends with statistics on how you played. Were you a Ghost, slipping past your enemies undetected? Were you an Opportunist who used the environment to your advantage? Or were you a Predator who took out anyone who stood in your way? Thief gives you some freedom to choose how you want to play it, and that flexibility is one of its greatest strengths.

You can turn off a lot of features

The ability to customize your experience extends beyond play style. The heads-up display and difficulty options can be changed as well, and these are the first places challenge seekers and old-school Thief fans will turn to after installing the game. Three difficulty settings are available — Rogue Mode, Thief Mode, and Master Mode — and each one can be tweaked. Hate Focus? Turn it off. Don’t want the upgrades? Ditch ’em. Want the game to feel more like the classics? Disable mid-chapter saves and allow stealth takedowns only.

Fans who want to recreate the HUD from the earlier titles can do so by turning off things like the Life and Focus meters, the onscreen interaction prompts, the loot glint, and the minimap. The waypoint markers, in particular, should be trashed immediately. You should play Thief slowly. You should explore it. If you simply dash from point A to point B, you’ll miss out on a lot. 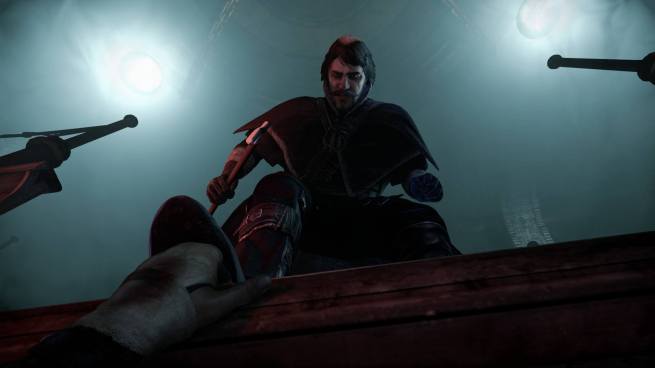 Above: This guy shoots subordinates in the face with crossbows — because how else would we know he’s evil?

The lack of atmosphere

Of course, straying off the beaten path is only good if you have a compelling reason to do so, and I found little reason to explore The City during my playthrough. This is surprising, since Eidos Montreal is responsible for Deus Ex: Human Revolution, a game that’s generally lauded for its detailed world-building and level design.

Although The City looks better than ever thanks to current-gen graphics, it feels empty and shallow. Except for guards and beggars, few people roam the streets. The guards, once the source of many amusing conversations, tend to repeat the same canned lines over and over. They feel less like living people and more like automatons whose sole purpose is to get between you and your goals.

Many of the homes you illegally enter in The City’s hub suffer from a sense of sameness. They don’t feel lived in. Neither does Garrett’s base of operations, an abandoned clock tower. You’ll see display cases for his loot, along with a bed, but nothing speaks about Garrett as a person. The tower is functional but soulless, a place to visit between missions when you want to stash some gear or admire your ill-gotten gains.

About midway through the game, you’ll encounter Moira Asylum. This chapter feels like Eidos Montreal’s version of Shalebridge Cradle, the burned down orphanage/asylum of Thief: Deadly Shadows. Despite its graphical limitations, the Cradle is one of the scariest levels ever made in a non-horror game. But what makes the level so memorable isn’t just the frights; it also tells a story. In Shalebridge, you meet the ghost of a girl named Lauryl in the attic. A mythical creature called the Hag killed her there years ago while her childhood friend watched in terror. The Hag uses her skin as a disguise. Lauryl asks you to free her soul by finding three of her possessions and destroying them. Compared to Shalebridge and Lauryl’s sad fate, Moira Asylum is largely forgettable. It’s good for one or two jump scares, but it, like the rest of The City, has no real story to tell.

“It has no real story to tell” is probably my biggest complaint about the Thief reboot. Don’t get me wrong, the game has a story. It’s just not a very good one. You can basically boil it down to “bad guy wants McGuffin object so he can save/destroy/control the world.” And while the earlier titles are guilty of the same crime, they at least surrounded that simple plot with interesting lore and characters.

The reboot seems to have done away with all the story elements that made the original franchise so compelling, and they’re sorely missed. You won’t see Hammerites, Pagans, or Keepers. You won’t see Mechanists with their creepy steam-powered robots. Instead, Eidos’ Thief attempts to tell a more personal story about Garrett and his young protegé, Erin, but since Garrett’s character never really progresses beyond “snarky loner who steals stuff,” the narrative mostly falls flat.

When tragedy befalls Erin early in the game, it’s hard to care because you barely know her or Garrett, especially if you’re a newcomer to the series. The villains never really move beyond mustache twirling, and their motives are vaguely defined. A late plot twist that should be a surprise only surprised me because it concerned a character that I had forgotten existed. I suspect he’s mentioned in one or two of the many notes strewn about each level, but relying on found documents to get major plot points across feels like lazy storytelling.

Despite my disappointment with Thief’s setting and story, I did enjoy my time with it. Sneaking about, pickpocketing guards, picking locks, and finding new ways to infiltrate a building are as satisfying as ever, and the game looks and sounds great (despite some janky audio mixing). As a longtime fan of the series, I want to believe a spot exists for Garrett in the current stealth-action genre he helped create. And if one doesn’t? Well, he’ll probably just wind up stealing one anyway.

Thief releases for the PlayStation 3, PlayStation 4, PC, Xbox 360 and Xbox One on Feb. 25, 2014. The publisher provided GamesBeat with a PS4 copy of the game for the purpose of this review.