Like any enthusiastic group of fans, the people who play a lot of games are very passionate, extraordinarily loud, and some times vicious. For example, publisher Electronic Arts makes a number of games that people enjoy. That includes titles like Madden Football and Battlefield, but that hasn’t stopped gamers from voting the gamemaker as the “worst company in America” in the last two annual polls on the customer-rights blog The Consumerist. That’s right. Gamers think EA is worse than Comcast, Time Warner, and Exxon.

EA has done a lot to earn the scorn of fans (it released busted games and Origin, a lackluster Steam competitor), but gamers also know how to hold a grudge. That’s why it is amazing that more than a decade after launching, customers almost universally love using Steam. The company has navigated fickle customer demands expertly. 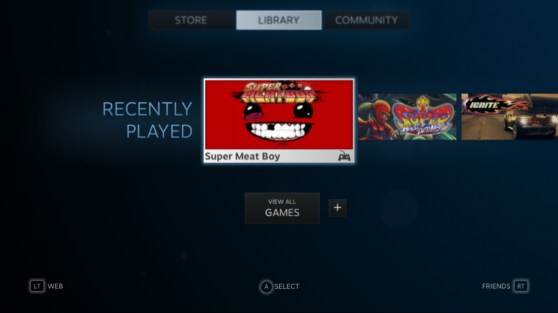 Above: Valve’s Steam service working on a TV.

Instead, Valve has earned the admiration of its customers in a number of ways. Steam is easy to use. It’s a convenient way to store all of your games and to access them when you need them in one place. The aforementioned sales have gained the system a reputation for fairness. Valve also treats developers and publishers well, which end users notice.

More than the above, the executives that run Valve make decisions as if they are real gamers. They are in charge of a company that earns an extraordinary amount of money. It got that way by appealing directly to people who live and breathe interactive entertainment, and it seems intent on sticking to that strategy.

Gamers respond to that. They see Valve as an ally or as a team they can root for in the battle against evil corporations hellbent on squeezing every dime out of consumers. In the end, Steam benefits because gamers feel at home using it.

For connection and community

Steam is more than just a store. Users have accounts where they keep all their games in a digital locker, but they can also use those accounts to make a friends list to game with others. They can also join groups based on similar interests.

People can quickly chat with their friends using the built-in instant messaging, and they can post on Steam’s message boards about specific releases or general topics. Unlike Xbox Live Arcade and PlayStation Network, which are similar services for Xbox One and PlayStation 4, respectively, Steam does not require a monthly subscription fee.

Valve is also consistently adding more features. It has achievements that players can unlock by performing difficult feats in games. It recently added trading cards that users can collect by purchasing and playing games. Gamers can even trade their unplayed games and virtual items with one another.

These are all ways Valve manages to engage customers and keep them coming back.