An estimated three out of every four games sold on PC are through Steam, according to industry research group IHS Screen Digest. It wasn’t always like that. Steam started small, and gamers actually didn’t like it. But Valve predates Steam, and we should look back to the very beginning. 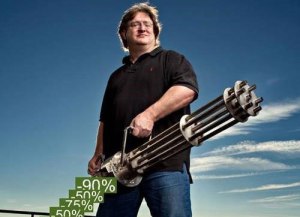 In 1996, Gabe Newell and Mike Harrington — a pair of Microsoft employees who worked on early versions of the Windows operating systems — left the company to make video games. They founded Valve Software in Bellevue, Wash. Two years later, with a team of developers working for them, they released Half-Life, a sci-fi shooter with adventure and exploration elements. Many consider it one of the most influential games of all time.

Following the success of Half-Life, the company continued releasing expansions for the popular title and began work on Half-Life 2 as well as a new suite of development tools called Source Engine to help produce the game. After years of waiting, Valve finally released Half-Life 2 in 2004.

Leading up to that release, Newell spent much of his time preparing the company’s new Steam client. Back then, before Steam, Valve struggled to update its games. A patch for the multiplayer Half-Life mod Counter-Strike would cause connectivity problems for huge parts of the audience for days at a time. To fix that problem, Newell approached companies like Microsoft, Yahoo!, and RealNetworks to create a client that would automatically update its games. Everyone turned Valve down, so it built the tool itself and called it Steam.

The studio released a beta version of the software in 2002. The official version went live in 2003. In its first iteration, Steam could auto-update Valve’s games as well as fight piracy and cheating. That’s it.

“Selling games over the wire was something we came up with later,” Valve spokesperson Doug Lombardi told GamesIndustry International in 2008.

As much as gamers love Steam now, they actually really didn’t like it at first. The service didn’t always work and would sometimes break games by updating them improperly. When Valve released Half-Life 2, the company required Steam for the game to function. This meant that even if people didn’t want the client on their computer, they had to install it to play the anticipated sequel.

But Valve didn’t give up on its plan for a PC gaming client. It kept forcing it on gamers and worked in the background to make the service better. In late 2004, the developer-turned-technology company was now eyeing a future of digital distribution. It started selling some of its own games on Steam, and then it inked a number of deals to distribute small titles from independent developers. 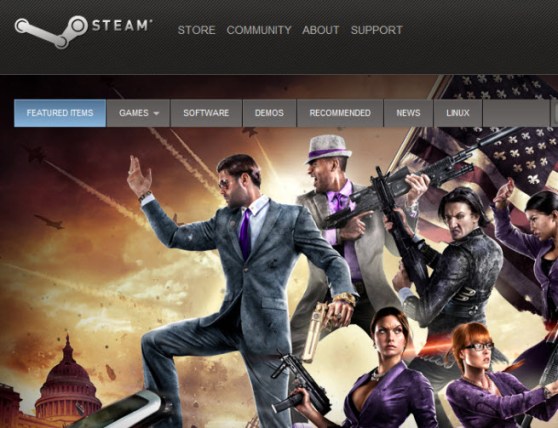 Above: Valve’s Steam digital-distribution service now features most of the biggest releases.

This lasted for a few years, and Steam started earning a profit. In those days, PC gamers still mostly purchased their software in packaged boxes from stores, but Steam — without shipping, printing, and manufacturing costs — had much bigger profit margins. Seeing the potential, larger publishers like Tomb Raider maker Eidos Interactive, Doom developer id Software, and Resident Evil publisher Capcom all started releasing games on Steam in 2007.

“We’ve approached the development of Steam the same way we treat our online games; we release something we’ve tested, we internalize the feedback, and then we release new features and functionality based upon the feedback received,” Newell said in a statement from May 2007. “In the past year, we’ve added over 100 new titles from third parties, grown to over 13 million active accounts, and introduced new features such as Guest Passes and Free Weekends.”

By then, Steam’s path to PC dominance was set. It took Valve around six and a half years to reach 65 million users in December. A month later, at the first ever Steam Dev Days conference in Seattle in January, Newell revealed that Steam had already added another 10 million accounts.