Wolfenstein: The New Order is a call of duty to all inglourious basterds.

MachineGames has developed the classic first-person shooter into a modern blockbuster with a cinematic heart. We played through the first three chapters of the PlayStation 4 version of the reboot (due out March 20 for PC, PlayStation 3, Xbox 360, PS4, and Xbox One) and picked up on a mix of Call of Duty spectacle and Quentin Tarantino flair pretty quickly.

Above: Players aren’t limited to treating Wolfenstein like a linear, straightforward shooter.

B.J. Blazkowicz, the Nazi-killing protagonist from previous Wolfenstein games, is back and wastes no time establishing himself as a badass for the ages. You dispatch massive mechanical canines with turret fire (twice), scale the wall of an entrenched castle fortress, and generally wreak havoc on dozens of technologically super-advanced Nazi forces before the opening credits even roll. Before you figure out how to properly leap between crashing airplanes, you find yourself in the middle of a tutorial for close-quarters combat. It all soon fits into that comfortable pattern of alternating modes of gameplay among grand bits of spectacle that helped Call of Duty define this past generation of first-person shooters.

But this new Wolfenstein isn’t leading you by the nose the entire time. Every level in the demo branched out multiple times into wider gunfight arenas with several methods of approach. These paths are usually split between a stealthy and guns-blazing method of confrontation. Blazkowicz can traverse buildings making up a Nazi checkpoint by traveling across patios or rooftops, by kicking down doors, or by speeding down a zip line. Health packs scattered throughout the levels provide the only way for you to regain energy — one of a few callbacks to Wolfenstein’s roots.

Objective markers might always be onscreen, but they never force the player to make a straight sprint to the end of each chapter. You have reason to scan each and every room for collectibles, some only accessible through panels hidden by radios or surveillance stations.

Above: The tiered perk system allows for multiple play styles, including stealth.

The New Order also benefits from a tiered perk system that unlocks special abilities after you complete certain gameplay milestones. For example, Blazkowicz will learn how to throw daggers after he has dispatched enough communications officers with stealth takedowns. Perks in this new Wolfenstein operate on a ladder system — similar to the way they work in Call of Duty. Advanced gunplay or stealth techniques are not available until you unlock the more basic perks.

MachineGames wants you to have a surprising amount of bloody intrigue with your blitzkrieg. Cutscenes come at regular intervals, detailing a pulpy alternate history of World War II. Blazkowicz barely survives an encounter with a sinister Nazi doctor (named Deathshead) and spends 1946 through 1960 in a state of partial paralysis. He regains control of his body and emerges in a world where a victorious Nazi government has ruled so long that all forms of resistance have disappeared from memory.

It’s an outlandish setup that refuses to ease up, at least through the demo’s three chapters. This unopposed Nazi rule has created a cast of villains so confident in their malice, it’s difficult not to appreciate just how joyfully vile they are. A train-car encounter late in the demo with one Frau Engel (a high-ranking SS matriarch complete with effeminate boy toy) is a masterful play of Nazi paranoia.

Above: Wolfenstein’s story is surprisingly in-depth and often utterly ridiculous.

Engel sets up a “purity test” for Blazkowicz that demands a choice between a series of photographs. You have little choice but to participate, a walking death machine with machine-gun arms is part of Engel’s bodyguard unit in the dining car. Engel murmurs curiously as you make your selections, alternating between setting up the next photographs and caressing her boy toy. It’s a deliberately slow scene that you’ll rarely find in the rapid-pace shooter genre, and it’s extremely effective.

The Tarantino influence is most apparent in the ebb and flow of this and other conversations. Inglourious Basterds (the filmmaker’s own take on an alternate World War II) is the obvious point of visual reference, and Frau Engel is an intense equal to Christoph Waltz’s similarly fiendish Colonel Hans Landa. But the game also treats epic flights of violence with the same impish delight as Pulp Fiction or Django Unchained. Blazkowicz’s first day after regaining consciousness consists of a car chase shootout and Nazi officer interrogation with a chainsaw and a smile.

The characters of Wolfenstein also tend to speak with the same anachronistically modern dialogue found in most of Tarantino’s back catalog, albeit not with the same level of wit. Of course, this version of World War II could just happen to feature platoons that study theater improv in between shootouts. It’s a capable, if not perfect, homage to the director’s style. All that’s missing are gratuitous shots of feet and references to Red Apple cigarettes. 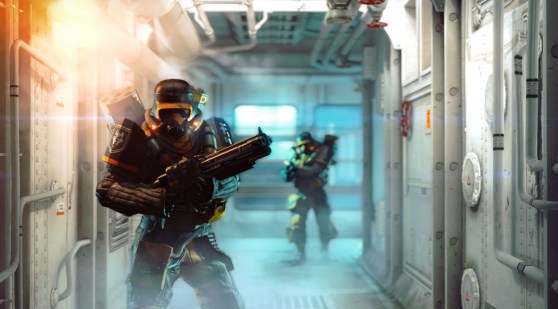 Above: These aren’t your History Channel Nazis.

The titular New Order for Wolfenstein appears to be one of adaptive nostalgia. Some of the modern blockbuster shooter’s best features combine with more than a few throwbacks to ye olde days. The developer married objective markers with branching paths and tiered perks with health packs. Cutscenes are knee-deep in Tarantino style, and unlike most games that try to ape the bombastic director, Wolfenstein manages the homage well. This war against the 20th century’s worst nightmare remains largely up in the air, but from what we’ve played, Nazi slaying hasn’t been this much fun in years.