The original Plants vs. Zombies introduced players to the concept of vegetarian zombies, who dined on a salad course before the brains. They must have eaten their fill, because in the new spin-off Plants vs. Zombies: Garden Warfare, they have no appetite at all.

This isn’t the only major change in Garden Warfare, available today for Xbox 360 and Xbox One (with a PC version release date still unannounced). Developer PopCap Games and Publisher EA have chucked the old 2D visuals and tower defense strategy onto the compost heap and replaced them with a 3D team-based shooter. Problem is, a lot of people enjoy the thoughtful strategy of the original games, and it’s hard to imagine this manic shooter will appeal to them as well.

Garden Warfare is a competent shooter, with a few unique bonuses to keep you interested, but it’s so different from the charming originals that you’ll wonder why PopCap and EA even bothered utilizing the license. 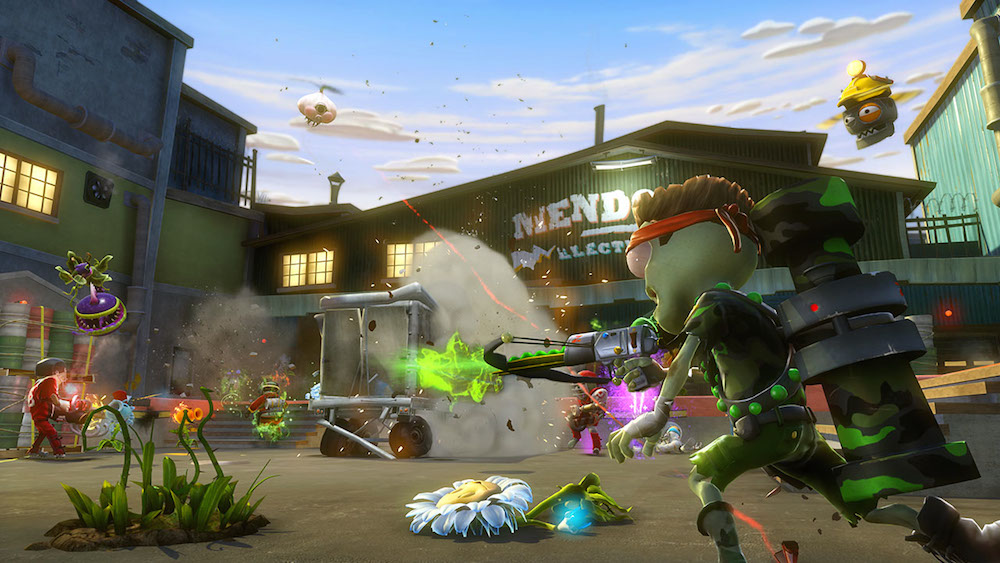 Above: With a maximum of 24 players on each map, battles often feel over-the-top and frantic.

Plants vs. Zombies is beloved in part for its sunny art style, and that certainly shows through in Garden Warfare’s well-rendered character classes. Each side has four unique classes, and they’re based on some of the most recognizable characters from the original series (see our hands-on preview for a direct comparison).

In 3D, the updated characters all look superb, from the leafy tendrils of the Peashooter to the rotting teeth in the zombies’ heads. The maps are also huge, with sprawling set-pieces like a pirate marina that offer multiple vantage points and secret routes.

We reviewed Garden Warfare on the Xbox One, and while the cartoonish visuals don’t look ultra-realistic, they are smooth and natural-looking. You’ll even find a few destructible components, like backyard fences that crumble under machine-gun fire. Pun-filled locations like the “Tactical Cuke” remind you that this is still Plants vs. Zombies, even if they’re fairly generic otherwise.

The original PvZ games starred a huge cast of characters (you needed an in-game almanac just to keep track of them), but Garden Warfare is limited to just a handful of representatives, with just four classes on each team. The characters, however, each have multiple special functions that apply to a number of tactical situations.

For example, each team has a healer class — the Sunflower and the Scientist Zombie can both place healing stations to benefit their team. But they have very different attack styles. While the Sunflower has to stay rooted while using its special death ray, the Scientist uses a teleporter to make his goo-gun more effective at close range.

A lot of thought has gone into packing these eight characters with many complementary actions. If the Plants team favors the burrowing Chomper, the Zombies can respond with Engineer Zombies to stun and disrupt them. As a result, each character feels slightly different, and this deliberate design encourages teammates to work together for the best results.

Hats, glasses, and other goofy gear

When you first start playing Garden Warfare, you’ll receive a random assortment of accessories, which let you put groovy glasses on the Sunflower or fairy wings on the Chomper. Sticker packs, which you unlock using virtual coins, grant you new items so that you can customize your look.

With a full match of 24 players, each wearing comical one-of-a-kind outfits, Garden Warfare looks downright joyful. When someone kills your character, a portrait view shows you exactly what your opponent was wearing, often leaving you to wonder, “How did they get that outfit?” The game’s silly fashion sense definitely softens the blow of stepping on a potato mine or getting sniped from across the lawn. 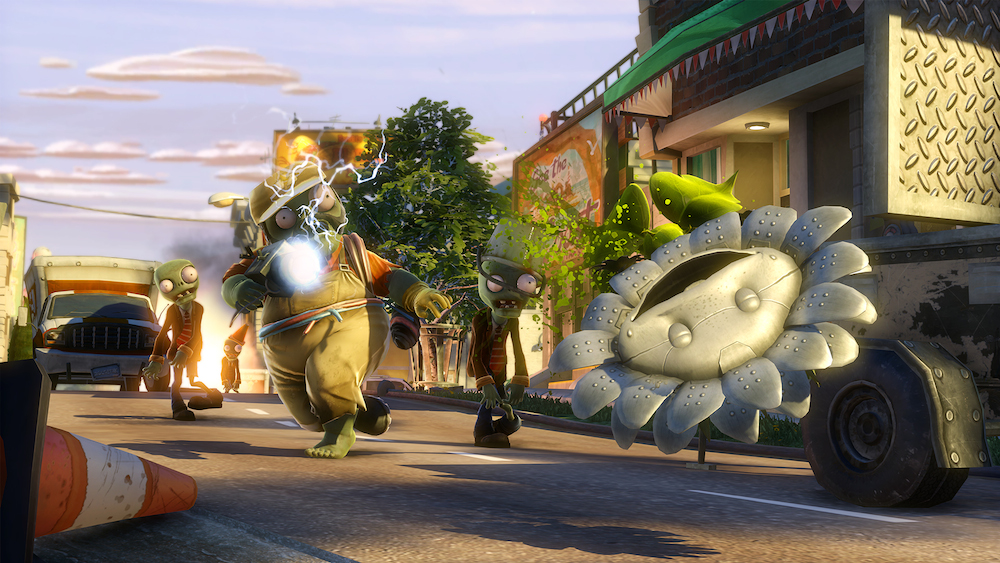 Above: An Engineer Zombie, flanked by two summoned zombies, vanquishes a steel Sunflower.

By far, the biggest shock in Plants vs. Zombies: Garden Warfare is that the original tower-defense gameplay has vanished, and in its place is a somewhat experimental spin on squad-based shooters like Valve’s Team Fortress 2. You might hope for some intelligent action, but Garden Warfare is all about running fast and shooting accurately — two things you never had to do in the original games.

Garden Warfare contains three online modes: Team Vanquish, which is just team deathmatch to 50 kills; Gardens and Graveyards, a struggle to capture or defend checkpoints; and Garden Ops, a four-player cooperative mode for the Plants. You’ll see some glimmers of strategy in Gardens and Graveyards and Garden Ops, because you can plant defenses or summon minion zombies from the ground instead of just relying on your teammates.

But since you can only earn the support characters through the game’s random sticker packs, you can’t plan a grand strategy. You’ll just have to play endless matches, buy packs of support units, and hope that your team doesn’t let you down when you choose to spend them. Relentlessly shooting your opponents doesn’t feel thoughtful — in fact, it dumbs down the clever tactical gameplay of the originals into something much more mindless.

While the original Plants vs. Zombies games contained dozens of levels with unique challenges (for example: nighttime levels with a dense fog cover), Garden Warfare’s modes are uninspired. You’ve probably played several deathmatch-type games before, and if you have, Team Vanquish will quickly get old.

Gardens and Graveyards fares a bit better, since the constant progress of Zombies pushing toward their goal (with the Plants always on the defense) feels more like an unfolding storyline than random chaos. For the Zombies to capture a checkpoint, there have to be more of them in the zone than Plants. As the clock ticks away, the action becomes much more focused and intense.

I preferred Gardens and Graveyards, with its climactic goals of invading Crazy Dave’s mansion or destroying a lighthouse-sized Sunflower, but it doesn’t offer enough maps to keep your interest for long. You’ll probably complete the handful of scenarios on both sides in a couple of hours.

Four-player Garden Ops is a decent change of pace, but the computer-controlled zombie hordes lack the intelligence of online opponents. This mode does offer random boss encounters via a slot machine, and the other modes could have used more of this unexpected novelty. Instead, they’re often safe, reliable, and bland — like a bag of frozen vegetable medley. 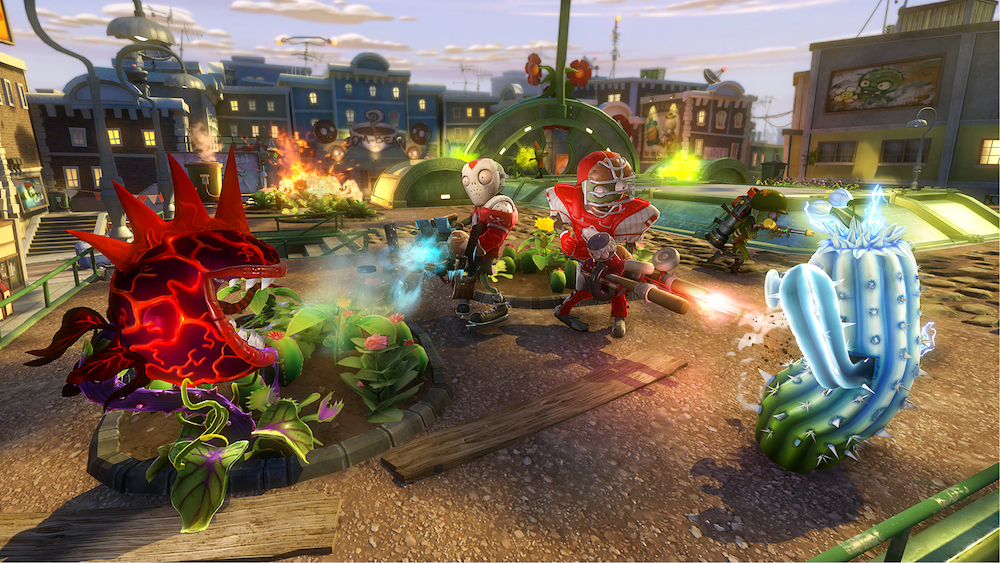 Above: The All-Star Zombies have heavy machine guns that fire football-sized bullets, making them a formidable heavy class.

I wanted to love Plants vs. Zombies: Garden Warfare with the same zeal I have for the original series, but this shooter variation lacks a lot of imagination. The action gameplay generally feels forced, and the bits of strategy that do exist are minute in comparison.

It’s apparent that a lot of effort went into updating the PvZ characters for this 3D makeover, but that doesn’t mean that it’s the same series you know and love. Playing Garden Warfare doesn’t feel like tending to a lush, lethal garden — it feels like Team Fortress 2, Call of Duty, or any other squad-based shooter.

The patient build-up of plant defenses is almost entirely absent, and the zombies act just like competent human soldiers. Although Garden Warfare has some charm, most of it is borrowed from the original games. If this was the first Plants vs. Zombies game in the series, I doubt there’d be much demand for a sequel.

Plants vs. Zombies: Garden Warfare was released for Xbox 360 and Xbox One on February 25, 2014. A Windows PC version has also been announced. The publisher provided GamesBeat with an Xbox One copy of the game for the purpose of this review. 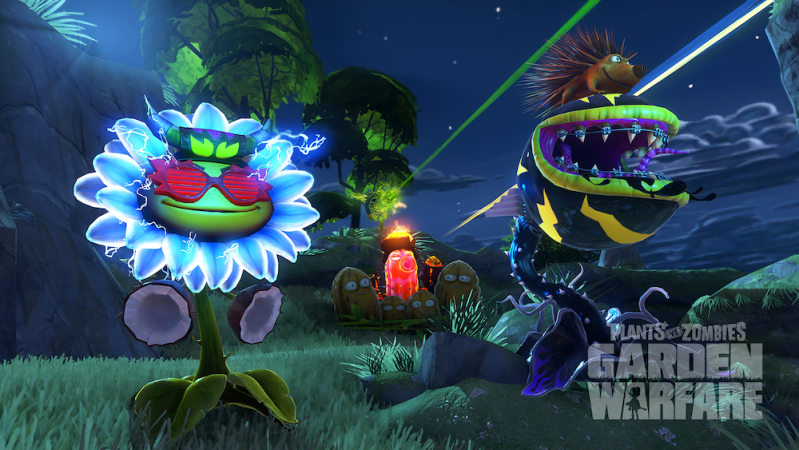 Above: Outlandish customization is the main reason to replay the missions again and again.