When I booted up Castlevania: Lords of Shadow 2, I prayed for the best. I hoped that someone was brutally honest with MercurySteam, the developers of the Lords of Shadow series, and gave them the constructive criticism that they needed to hear. Someone who could point out the specifics on why the original action-adventure game fell way short as a Castlevania experience.

I also prepared for the worst: the possibility that all of the odd 80s and 90s review scores out of 100 that the first installment received from critics were seen as a giant green light for the design team to deliver more flawed gameplay.

Just so my fears are clear: The original Lords of Shadow was one of my biggest disappointments in the world of Castlevania. It was a visually stunning yet monotonous, confused, and creaky amusement park ride that padded its length with tedious busy work. MercurySteam was trying to reinvent Castlevania, but it wound up with an oddly paced regression instead.

Publisher Konami releases its sequel today for PlayStation 3, Xbox, and Steam. And I’m no longer worried. 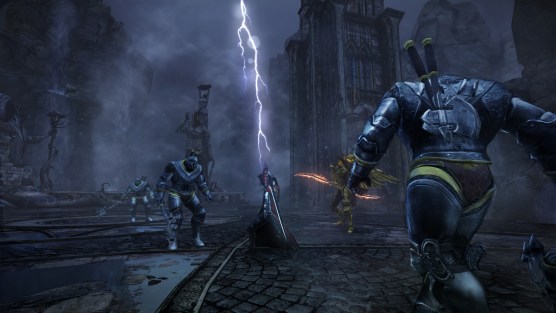 Above: PFFFT! What are the chances that I am going to get struck by ligh…

MercurySteam’s first good move was to go to the drawing board, rip the restrictive chapter-centric level design off the table, wad it up, and slam it into the Konami break room garbage can. The key to Lords of Shadow 2 settling into a more enjoyable Castlevania experience revolves around going back to a Metroid-influenced level structure. Although the game is still linear in nature, guiding me down a walled track from point A to point B, the road widens and curves into itself, encouraging a lot more exploration. It also lays out the right bait to tease me into willfully backtracking later on, with the promise of an item just out of my reach or the possibility of a shortcut between sections.

What little backtracking was required to finish the main campaign did not feel like a miscalculation of the layout or padding for extra play time. I never felt like completing a section in the main mission gained me the reward of a U-turn back from where I came, which can be a trap of this layout even in 2D. When I did wind up in situations where I was crossing familiar ground, it was always as a short junction to something fresh.

Most importantly, this structure gives LoS2 a much more consistent pace, with a momentum that is always moving and avoids the abrupt halts that the previous game’s chapter system created. 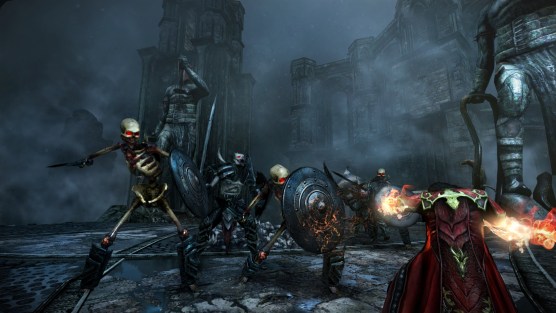 Above: So much more enjoyable than climbing.

Another benefit of this level structure is all the opportunities it provides for large groups of monsters to jump my ass. Transitions between major combat areas, such as platforming and puzzle sections, didn’t keep me preoccupied from fighting monsters for too long. When backtracking through a section, a group of creatures is always ready to respawn back in to tear me apart. At a later point in the main mission, Lords of Shadow 2 also begins to do a bit of creature-type rotation in certain sections, adding just a little bit more variety to some of the encounters.

LoS2 also adds a Challenge mode, which appears when you unlock the Chupacabra shop (an in-game store that appears about one-third into the main mission). This mode provides a set of arena showdowns with various mobs of creatures going up against the player. Each challenge also has a set of objectives that are related to the combat system, such as not using any special items or maintaining your focus meter, which requires filling with consecutive successful hits on an opponent without receiving damage, for a certain amount of time.

The combat system itself is one of the very few things from the original Lords of Shadow that I am happy to see carry over to the sequel. You can unlock a healthy collection of moves across the three main weapons (Shadow Whip, Void Sword, and Chaos Claws), with a combo system that feels very forgiving about when an attack string can cancel into another. This also includes canceling into a dash, block, or parry, which allows for a very versatile toolbox for maintaining focus meter in most situations.

The best tweak to the combat system, if not a benefit to the entire game in general, is that the camera is now completely controllable. Don’t get me wrong; a lovingly designed static camera can work for an action game, but the one in the original Lords of Shadow had me doing some guesstimated hail marys in the middle of a fight. Now I can hit a specific target, check behind me for anyone sneaking up, dash out of danger in a very specific direction, and be clear about where my character is facing.

Tying it all together are boss battles that focus on mastery of the combat system, not so much weird gimmicks. It may not sound different or exciting, but it works so much better here than the overload of climbing or performing of timed-button “quick-time events,” which is what a lot of boss battles in the original revolved around.

Dear MercurySteam boss battle designer: Thank you for cutting down the Shadows of the Colossus-inspired gameplay. Even Death, one of my favorite boss characters in Castlevania, is a one-on-one showdown of fighting styles and not a gigantic dragon skeleton ride. Although you’ll find a “climbing boss” here or there, it is an extremely small part of the overall adventure.