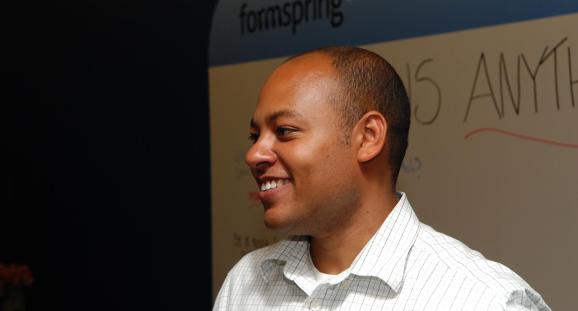 Ade Olonoh, the founder of the anonymous Q&A site Formspring, is setting his sights on animated GIFs.

Loop is an iOS app for sending text updates to all of your friends at once — à la Twitter — but each message is tied to an animated GIF. The developers designed the app to be easy to use for both finding and using content.

To fully understand why Olonoh built Loop, we connected the dots between his new service and the late Formspring.

At its peak, Formspring surpassed 30 million registered users. The service, which shut down less than a year ago, ultimately had trouble keeping the lights on after services like Tumblr duplicated its core Q&A feature. A negative public image fueled by reports of rampant bullying didn’t help.

Olonoh tells us he started Formspring “because it just felt like a natural way to start conversations. For me, that came from a frustration with Twitter and Facebook, where you look at a blank box and have to think of something to say.” While building Loop, Olonoh tells us, “that problem of trying to figure out more natural ways to express yourself still seemed interesting.”

With Loop, Olonoh is building a service around the popular use of reaction GIFs. To that point, Olonoh says, “There may be something mundane happening in my life, but I may have a great reaction to it.” The service curates its own collection of GIFs, which are split up into categories like “Happy” and “Annoyed.”

Loop is clearly a lighthearted service, and launches in stark contrast to the intensity of Formspring at its peak.

Olonoh acknowledges that this app may not be for everyone, but he says it has a “very different dynamic” from other networks. Loop is currently bootstrapped by Olonoh, unlike Formspring, which was venture-backed.