I don’t like soccer. I hated playing soccer games during P.E. in high school, and I never cared for all of the frenzy surrounding the World Cup. But if the sport was more like Inazuma Eleven, with dragons, ninjas, and tornadoes made of fire, I’d watch the hell out of that on TV.

Nearly six years after first coming out in Japan for the Nintendo DS in 2008, and almost three years after it arrived in Europe, developer Level-5 finally released Inazuma Eleven in the U.S. (available now on the 3DS eShop). Unlike soccer heavyweights Pro Evolution Soccer and the FIFA series, Inazuma Eleven isn’t based on any real-world leagues or players. It’s a role-playing game that puts you in charge of the Raimon Junior High soccer team, and you have to help them grow from a ragtag group of underdogs to national champions.

The best part about Inazuma Eleven is that you don’t need to know anything about soccer to enjoy it — it’s better than playing the real thing. 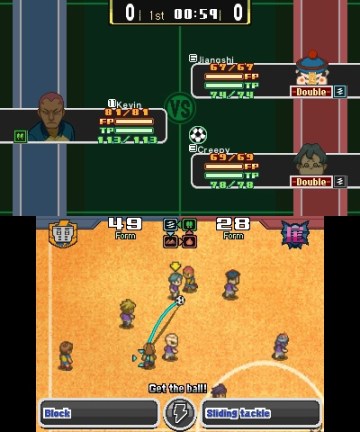 Above: How well a player performs depends on his stats and his elemental affinity.

Smart use of RPG mechanics

Inazuma Eleven uses traditional Japanese RPG mechanics in amusing ways. Consider, for instance, how it rationalizes its use of random battles: At any time, other school clubs can challenge you to a brief soccer game. So instead of fighting monsters, your four-man party plays against the athletics club, the cycling team, rugby players, or comic-book aficionados. Matches against rival schools are your boss fights, and they’re pretty tough. While I didn’t have to spend hours and hours leveling up my team, it did take some time to prepare them.

Winning battles and matches earn you Prestige points, Inazuma Eleven’s form of currency. Prestige can buy you better shoes, gloves, accessories, and consumable items. As someone who’s played a lot of fantasy JRPGs, it was fun to see how these systems worked in Raimon’s semi-realistic setting. 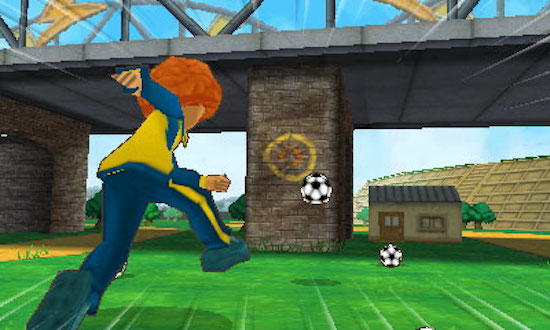 Above: You can train specific attributes, like kicking power or speed, at special training stations.

Inazuma Eleven transforms soccer games into DragonBall Z fights. The kids use fireballs, thunderbolts, black magic, and other extravagant attacks to help them win. These abilities also increase your chances of securing the ball, stealing it from other players, or destroying goalies’ supernatural defenses. Learning new techniques — by leveling up, buying them, or finding them in town — is an essential part of the experience. Some of the best ones you learn occur during key moments of the story, usually when an opposing team has some awesome power you can’t overcome yet.

However, you can’t always depend on them. Most of the strategizing still relies on your ability to carefully pass the ball and put players in the right positions. It’s not an easy task. The scores were always close, and many of my game-winning goals snuck in only seconds before the referee blew his final whistle.

Raimon plays with a lot of heart

Despite its over-the-top presentation, Inazuma Eleven tells a heartfelt story. While some of its characters start off as stereotypes, such as the fat kid who likes to eat a lot or the handful of brooding players with questionable pasts, they turn into something much more than that — they feel authentic. Tying them together is Raimon’s team captain and star goalie, Mark Evans, whose unrelenting positivity, even in the face of danger, motivates everyone else around him.

The only one who doesn’t have any sort of complexity is the main villain. His backstory is paper-thin, and the writing just doesn’t let him grow beyond his “I’m evil for the sake of being evil!” personality. But the rest of the Raimon Junior High crew more than make up for that oversight, and they provide a healthy balance of drama, comedy, and just enough cheese to make the story work. 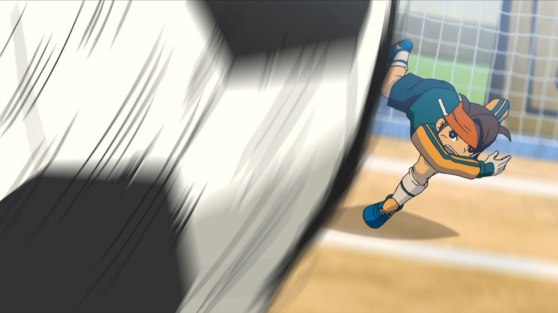 Above: While Mark Evans is best kept as your goalkeeper, you can assign him to other positions.

You’ll spend a lot of time running back and forth between the same locations. It’s not a big deal, but it gets annoying over time, especially when you have to head to a place that’s literally next door to the one you’re currently in to satisfy some story requirement. This mostly happens on the school’s campus: You’re talking to someone in a classroom, and suddenly, you have to go back to the nearby soccer club room. A couple of steps later, you’re there, wondering why the hell the camera didn’t just cut to the club in the first place like it does with other plot-heavy scenes.

Random battles turn into a chore

Though a fun and necessary exercise early on, random battles quickly become obsolete after you unlock Flash Training, a dungeon-like facility that can train all your players at one time rather than just whoever is in your party. Since Flash Training offers more experience and Prestige than the average random battle, I have no idea why Level-5 decided to keep them. They’re just a chore … actually, they’re worst than that because you lose Prestige and Friendship points (which you use for recruiting new players) every time you run away.

To the developers’ credit, you can find an accessory that’ll stop random battles from happening, but it’s not available until the end of the game.

Inazuma Eleven took a sport I didn’t care for and managed to make it exciting. My 30-hour adventure did drag a bit with the constant, and ultimately useless, random battle system, but the strategic matches and compelling story made it hard to put down. The 3DS isn’t exactly starving for RPGs right now, but don’t overlook this hidden gem of a game, even if it is six years old.

Inazuma Eleven came out on the 3DS eShop on Feb. 13. The publisher provided GamesBeat with a digital copy of the game for the purpose of this review.